Share All sharing options for: Is Chris Kaman's Foot Causing a Spacetime Anomaly?

In standard Einsteinian physics, time moves in one direction.  Most of us have become fairly comfortable with this concept.  For instance, we know that the next Clippers game is scheduled for Wednesday, which is two days in what is commonly referred to as the future.  With the passage of time, as two days elapse, we should expect to see the Clippers play the Hawks.

The basic formula is fairly straightforward.  If we have an estimate of the time remaining until a future event, and time has elapsed since that estimate, we can subtract the elapsed time from the original estimate to arrive at a new estimate.

However, in the case of Chris Kaman and his injured foot, an entirely different and intriguing pattern is emerging.  As he rests his foot, the time remaining until his foot will be healed continues to increase rather than decreasing as one would expect given the presumed nature of the spacetime continuum.  In fact, a distinct pattern has emerged that makes scientists believe this could in fact be evidence of a long sought space time anomaly, and not just a series of mis-diagnoses or medical set backs.  In short, the pattern is too precise to simply be a series of random mistakes.

Each time a new estimate of the time remaining until his foot is healed is provided, it is exactly the same as the total time elapsed since the original event (in this case, since he was first injured).  In other words, instead of:

without regard for the original time remaining.  His revised time remaining to be able to play is always exactly equal to the elapsed time since the injury.  Fascinating.

This has the net effect of making time appear to run backwards in the case of Kaman's foot: with each passing day, he gets further away from his time based destination rather than closer to it.  However, researchers caution that it's more complex than that.  Time is not running backwards per se - rather the passage of time is simply displaying a heretofore unknown behavior as regards Chris Kaman's foot.  It is not yet known whether other portions of Kaman's anatomy exhibit the same phenomenon.

The data in this case are undeniable:

At this rate, it's abundantly clear that the Clippers will announce during the All Star Break that Kaman is out for the season, as he will have been out for over 11 weeks, and there will be fewer than 9 weeks left in the season at that point.  It remains to be seen if this particular anomaly has the ability to span NBA seasons - if so, Kaman will never play basketball again.

There are several theories as to what may be causing this spacetime anomaly.

One theory centers on the widespread use of DVRs in watching sports.  Sports fans now have the ability to bend the space time continuum - to delay the beginning of NBA games to suit their schedules, to travel forward through time to miss boring free throws and time outs - it is possible that Kaman's foot is just an early manifestation of previously unforeseen problems stemming from this fraying of the fabric of spacetime.  Call it the TiVo Syndrome.

Or it could be something related to Kaman himself.  As one scientist put it in attempting to explain the anomaly:  "He's a pretty strange dude."

Finally, there's the "Riff Raff theory" espoused by Dr. Frank N. Furter.  It holds that Kaman is in fact a time-traveling butler from the planet Transylvania. 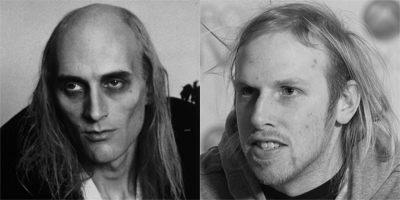 The visual evidence supporting his (her?) theory is strong indeed.

Let's do the Time Warp again!