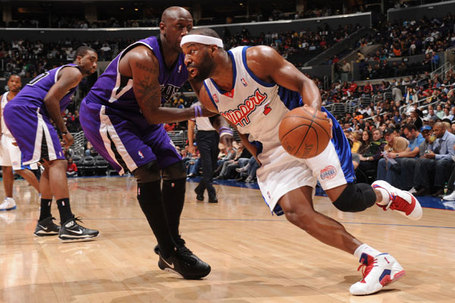 Darn it! The Clippers won.

The Kings played with absolutely no effort and got punked tonight en route to a rout. This game was literally over at the end of the first quarter. For those of you wishing it were on TV, don't worry there wasn't much to see.

Sure, I could put some stats in here and talk about how Brian Skinner somehow found some leftover Elton Brand mojo in his locker, sprayed it on and went for 21 and 10.

I could write about how the Kings' big men, Jason Thompson and Spencer Hawes were continually getting knocked onto the floor by the aggressive Clipper defense, getting stepped on repeatedly, as the Clippers blocked, snatched and wrestled the ball away.

Or I could write about how good the offense looked, how Gordon was again the perfect picture of consistency, how Kaman went for a double double and 4 blocks, or how Acker even looked good in limited minutes or how DeAndre had a monster high two hand slam.

But I won't write any more about those things.

Why? Because the Kings were so bad - so bad, that I'm sure any team from the NCAA tournament could have done the same or even better than the Clippers.

Don't get me wrong. I was happy to see Gordon's bingos and Kaman's utter rejection of Jason Thompson's slam attempt but it is just not that fun when the other team looks like they're not even trying. I don't think any of them even put their hands above their shoulders unless they were shooting. They looked tired and uninterested.

It was so bad I even caught Marcus Camby yawning.

It was so bad Dunleavy actually SAT DOWN AND DID NOT CONTINUALLY SCREAM AT EVERYONE for most of the game. I don't think I've ever seen Dunleavy sit for that long during a game - EVER!

SO WHY WAS THE STAPLES CENTER PACKED?

I know I got two tix for free for filling out a survey, but they must have paid people to come to the game tonight. It hasn't been that full since maybe the Boston or Cleveland games? But Sacramento????? Come on!

Of the games I have been to this year, the ones that have been packed have been the ones against teams with a large fan base. It's usually been almost 50% opposition fans. But tonight there didn't seem to be many Kings fans at all or maybe they were quiet the whole night because they were losing so bad?

I looked around and all I could see was one King fan, center court right behind the announcer, who kept screaming something or other at the refs and Kings players. And I don't think it was a Maloof.

So where did all these Clipper fans come from?

The four "Fire Dunleavy!" guys were at it again tonight, in section 119, about 12 rows directly above MDSr.

It seemed like there were a lot of friends of ushers or employees as an unusual amount of employees kept talking to people around us as if they got them in. Maybe they are giving away tickets to employees now and having them fill the arena?

Could be, as there were many people there who did not have that typical Clipper fan "look". Most looked totally lost while enjoying the massacre. Will these free giveaway seats spawn new Clipper fans for next year?

Probably not. The girl in front of me was flipping through a Laker guide during the game.

As soon as the playoffs start, I'm sure at most of those "freeloaders" there tonight will forget about the Clips as they root for the Lakers to go all the way. 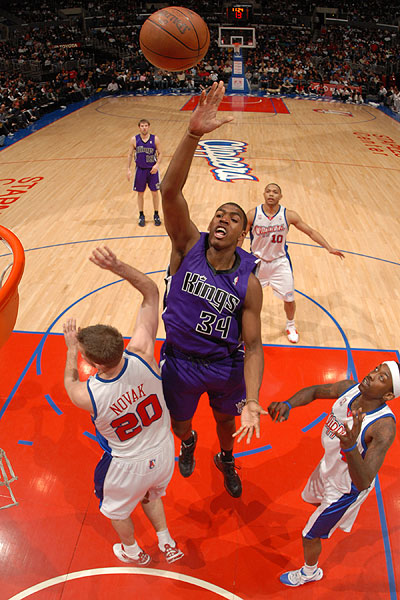