Share All sharing options for: Randy Smith - A Buffalo Legend 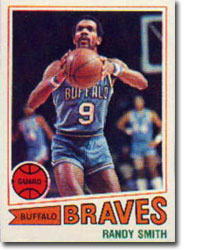 I'm sure I watched Randy Smith play basketball at some point.  Maybe in the 1978 All Star game in which he earned MVP honors.  Maybe in the Clippers' inaugural season in San Diego.  Surprisingly, I was a big fan of Ernie DiGregorio, so I probably watched the dynamic Smith/DiGregorio backcourt a couple of time against the Lakers in the mid-seventies.  But I'm sad to say I don't remember watching Randy Smith play.

Randy Smith died yesterday of an apparent heart attack in his home in Connecticut while working out.  He was 60 years old.

The Clippers came into existence as the expansion Buffalo Braves in 1970.  They won 22 games that first year, securing a high pick in the 1971 draft.  They used their first round pick, third overall, to draft Smith - Elmore Smith.  Yes, they also got Randy Smith in that same draft - in the seventh round, the 104th pick overall.  Now, it goes without saying that NBA scouting wasn't quite the same thing in 1971 as it is today, which explains why the Braves were the only team that seemed to know about Randy Smith, a local legend and a three sport star at little Buffalo State (he was an All American soccer player and a record setting high jumper as well).  But it is remarkable to say the least that a seventh round pick (even in the days of 17 NBA teams) would go on to become a two time All Star and an All Pro.  As far as I can tell, Smith is the second lowest draft pick ever to make the All Star team (ignoring ABA/NBA shenanigans like the fact that Artis Gilmore was drafted after Smith in the same draft).  Mark Eaton was drafted late in the fifth round, 107th overall, in the 22 team NBA of 1979, and squeaked his way into the 1989 ASG - suffice it to say Eaton wasn't the MVP.  Smith is by far the lowest draft pick ever to be named All NBA.

The other remarkable aspect of Smith's NBA career was his durability.  In twelve NBA seasons, he missed a total of eight games.  In fact, he played in 906 consecutive games at one point, which was the NBA consecutive game record from 1983 until 1997 when A.C. Green broke it.

Randy Smith is the franchise's all time leader in such non-trivial statistical categories as points, games, assists and steals (and bear in mind that he was shortchanged a couple of seasons worth of steals since they didn't begin tracking those until his third season in the league).  He averaged over 20 points per game in four consecutive seasons including a career high 24.6 in 77-78, the team's final season in New York.  He was named second team All-NBA in 1976.

In the comments section of a recent post about Cuttino Mobley, the subject of retired jerseys was raised.  The Braves/Clippers franchise has never retired a jersey and although it is difficult to make a particularly compelling case for any players in the Los Angeles era, Smith is almost a no-brainer for the franchise as a whole.  Hall of Famer Bob McAdoo is also a good candidate, having won a league MVP while playing for the Braves, but he played only 332 of his 852 career NBA games for the Braves, and was long gone by the time the team moved to California.  Smith on the other hand spent the vast majority of his career with the franchise, and is a direct link in the team's western New York and west coast history.  He averaged over 20 points per game for the first ever Clippers team that first season in San Diego.

Why did Randy Smith leave the Clippers after a single season in San Diego?  Looking at the transaction in which he was traded for a first round draft pick, it's tempting to infer that the notoriously parsimonious Clippers traded away their expensive star for a cheaper rookie contract.  Not so.  And this was a couple of seasons before Donald Sterling bought the team, so you can't blame him.  No, the villain in this piece was then NBA commissioner Larry O'Brien.  It was a different era in 1979 and the league was still trying to figure out free agency.  When the Clippers signed Bill Walton away from the Blazers, the commissioner forced them to trade Smith away - I guess the league was afraid the Clippers were going to be too dominant, imagine that.  (This is the same year that the Lakers added first overall pick Magic Johnson to a team featuring five time MVP Kareem Abdul-Jabbar - yes by all means commissioner, break up the Clippers.)

Randy Smith will always be remembered in the annals of Buffalo sports.  He should be remembered as one of the great Clippers of all time as well.