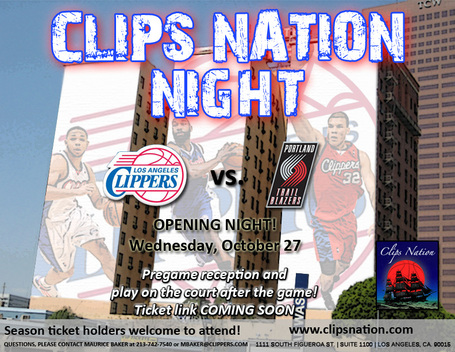 The Citizens have spoken.

Originally I was going to let the poll run through Friday, but the decision is pretty clear, so rather than putting off the inevitable, let's start making plans.  Of the four potential dates for the first Clips Nation Night of the season, almost two thirds of the votes were for Opening Night, Oct. 27th vs. the Portland Trailblazers.  And why not?  What are we waiting for?  It's time we all got to watch Blake Griffin in a regular season NBA game, and what better time than in his debut?

In case you're new here, we did one of these at Staples Center last season and it was a lot of fun.  We'll have a reception before the game in Staples with a cash bar, which is a great chance for everyone to meet fellow citizens of Clips Nation.   We'll have some prizes at the reception.  And this year we'll have access to the court after the game to play some ball.

Use the comments on this thread to let me know if you want to lace 'em up that night.  How many people want to play will determine what kinds of things we do on the court.  Even if you commented on the earlier thread saying you plan to play, leave a comment here as well so that I have it all in one place.  Thanks.

Citizen besaje is working on getting the ticket link up and we should have it by the end of next week.  Hopefully you were saving this date for the group event and didn't buy individual tickets for it in the presale.

Even if you already have tickets, for instance if you're a season ticket holder, you can still participate in the group activities.  If you have any questions, post them here and Citizen besaje (aka Sam) will try to answer them for you.

Let's make this a huge event.  We had over 100 votes for Opening Night on the poll, so I expect at least that many people to attend.  Think of it: history will be made.  Blake Griffin will make his NBA debut, and Steve Perrin will make his Staples Center hoops debut, both on the same night!  Epic.