NBA Lockout - I Don't Want to Write About This ANYMORE!

Share All sharing options for: NBA Lockout - I Don't Want to Write About This ANYMORE!

I'm so sick of this lockout. I don't want to write another word about it. But there's nothing else to write about. I firggin' wrote a preview for Loyola Marymount for SBNLA yesterday. Loyola Marymount for FSM's sake! (I also wrote one for Pepperdine, and I'm OK with that, though sadly the Waves are not going to be much good this season.)

So even though I don't want to write about it, here I go again. Don't expect any great and insightful assessment of the current situation. The absurdity of it all precludes that. This is more like a series of rants...

Perhaps the most annoying part of all of this is that it is forcing basketball fans to become minor experts in labor law. The players' union might decertify! What does that mean? Why would they do it? It could increase their leverage because they could then file anti-trust legislation against the league. How would it work? What about the National Labor Relations Job Board (NLRB)?

Yuck. I suppose you could argue that they are both forms of competition, but it seems to be that sports (which would should be watching) and legal proceedings (which we are watching instead) are about as dissimilar as activities get.

I don't really get it all, but here are some aspects of the decertification scenario that seem important from what I can gather.

The fast track to a union-less situation is called a "disclaimer of interest" - in this, Billy Hunter would basically step aside and say he is no longer representing the players. In that scenario, individual players could pursue anti-trust suits basically immediately.

The petition doesn't necessarily blow up the season - the two sides would presumably have 45 days before the decertification vote to get a deal worked out. In that sense it's probably a decent strategy - the players have had little to no leverage throughout this process, but the owners certainly don't want the chaos that would ensue from actual decertification. By starting the process, the players at least put a little uncertainty in front of the owners.

There are also complaints pending before the NLRB already, the status of which I do not know.

As a quick aside, when you look at how Stern and the owners have handled the players throughout this process, you try to imagine how this might play out in a more normal labor situation. What if the players took the deal - and then made the bastards pay, at least a little? When police unions are disgruntled, they sometimes get the "blue flu". Players are probably too proud and too competitive to do something like that, and once again it would be the fans who would actually suffer. But take some of the real villains on the management side in this process - what if Kobe Bryant decided not to play in Phoenix this year, just to stick it to Robert Sarver (he'd have to make his plans known in advance to depress ticket sales also)? What if Steve Nash took a bunch more nights off this season? Why shouldn't he? Just because you can force a deal down your employees throats doesn't mean you should.

Rant 2 - A breakdown a week

I was looking at my calendar, trying to get a feel for the happenings of the last month or so in this stupid process, and something very interesting jumped out at me. On a traditional Sunday to Saturday week basis, the NBA lockout has had exactly one breakdown in each of the last five weeks. Since the beginning of October, when the sides started meeting again in earnest, talks have fallen apart on a very regular basis. 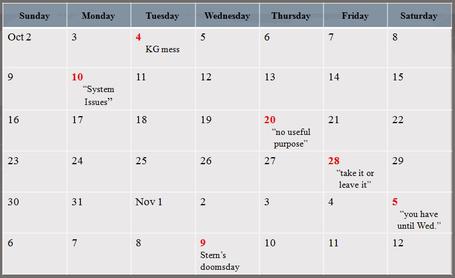 Sometimes it's seemingly been against long odds. There were times when we didn't think they were even going to meet, and then they would get back together at the last moment, only to blow it up again. The net effect of course is that both sides (but especially the owners) look like hypocrites. How many times now have the talks broken down over a "50-50 take it or leave it" ultimatum? How many times has Stern threatened that the deal would get worse, only to offer a marginally better deal?

Last week it really looked like the string of weekly break downs would end, but the sides managed to meet AND break down all in the course of one long Saturday (even though it was after midnight, I'm leaving the break down on Saturday, because it looks better on my calendar).

The NBA recently launched a twitter account specifically to tweet about lockout issues, @NBA_labor. I understand about spin, but this seems to be something more. Reading through the @NBA_labor tweets is a truly Orwellian experience; it's what I imagine Chinese state run media must be like.

The players association even got in a little twitspat with them yesterday.

The @NBA_labor account launched on October 31, but for some reason they went into propaganda overdrive recently. They've sent out 18 tweets total in their existence - a dozen of them since yesterday. Of the 5,000 followers, most of whom are no doubt hoops heads that are pretty plugged in to the lockout situation, I can't imagine that many of them would be taken in by their half-truths.

For instance, one of yesterday's tweets reads:

This was intended to show how much the league has compromised in the negotiation process, but it's so disingenuous as to be laughable. The obvious problem is that these were all items on the NBA's initial dream proposal, which was draconian and never had any chance of being implemented. They only compromised from a totally unachievable position.

But take the no rollbacks bit specifically. Is the NBA seriously asking it's tweeps to recognize as a compromise the fact that their current proposal will actually pay players the full monies they are obligated to pay based on signed contracts? "Hey players. You know those employment contracts we signed with you over the last few years. We heard what you said about actually wanting to get that money, and we're wiling to concede. You're welcome."

No hard cap? It's still a much harder cap than was there previously, and certainly not the cap system the players association asked for. What exactly did the NBA say Yes to?

Fully guaranteed contracts? You know, the owners have never had to guarantee contracts. It's something they choose to do.

We get it, the average NBA player is paid more than us. They're paid a lot. And you know, if the NBA were successfully able to get a 20% rollback of salaries in this deal, they could still send out a tweet saying that average player compensation is $4.4M, and that would still be more than I make (by about $4.4M). As for the increases, thanks NBA, for demonstrating what 4% projected annual growth looks like. Math! It's fantastic!

It's funny how @NBA_labor doesn't tweet about the average net worth of the owners who are asking for massive concessions from the players in this negotiation.

I'm not sure if I stole this concept from John Raffo, but ever since the latest ultimatum, I can't help picturing David Stern as Grand Moff Tarkin (you know, Episode 4, A New Hope, or as I like to call it STAR WARS). "Set course for Alderaan."

The owners clearly have way too much power in this whole process, and Stern's deadline is a disquieting reminder of that. Reverting the offer back to 47% of BRI, a hard cap and salary roll backs is just plain evil - he knows the players can't accept that, but he also knows there's little they can do to stop him. Would he destroy planet NBA just to demonstrate the Death Star's capability? You bet he would.