The New Clippers - Relevance, not Curses

Share All sharing options for: The New Clippers - Relevance, not Curses 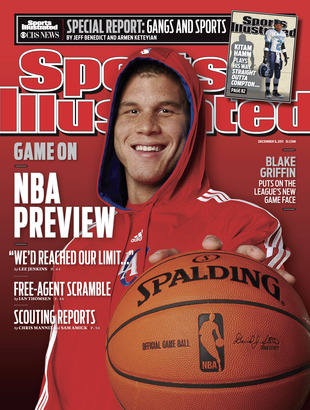 Citizen John Raffo posted about Blake Griffin on the Cover of SI last week. He says I was afraid to; afraid of the curse; afraid of the ClipperSteve reverse mojo, which when combined with a Clippers curse and a SI cover curse, could unleash untold powers. Don't cross the streams; it would be bad. But I'm not afraid now. Something has changed for the Los Angeles Clippers. It doesn't mean it's changed for good, it doesn't guarantee future success by any means. But something has definitely changed.

How do we know? Well, for one thing, General Manager Neil Olshey's phone starting ringing off the hook last Wednesday morning with calls from agents of players who WANT to play for the Clippers. For another, when Griffin appeared on the cover of SI's NBA preview issue, the general reaction was "Yup, that makes sense" and not "Watch out for the SI cover jinx."

You see, the Clippers are relevant. I would say "relevant again" but it's really happening for the first time. Certainly the first time the franchise has been this high in the NBA consciousness. The Clippers name is prominent in the rumors involving mega-stars Chris Paul and Dwight Howard. And, most importantly, the team is getting mentioned without the usual caveats regarding inept management and miserly ownership. (Sure, there's still some of that, but old habits die hard.)

There is of course no question as to the source of this new found relevance. It's not like Olshey's ascension suddenly made everyone take the team seriously - the man has done a solid job as GM so far, but let's face it, Mike Dunleavy's resume in basketball was a bit more impressive than the former soap actor's. The lockout drama this summer did serve to take the "bad owner" stench off the franchise a bit. Or maybe just spread it around a little; as Donald Sterling kept a low profile in the lockout talks, lots of other owners stepped forward to contend for the title of worst NBA owner. I'm not saying that Sterling is suddenly a favorite of NBA players - just that they are probably realizing what was true all along, that most NBA owners are jerks, so Sterling isn't exactly unique in that regard.

No, the reason the Clippers suddenly matter so much is Griffin. The NBA is a superstar driven league, and Griffin has the potential to be one of the biggest. His rookie season was spectacular from a statistical standpoint - and frankly, his stats pale in comparison to everything else he brings. In an entertainment enterprise built on excitement and the unexpected, Griffin was must-see-TV by the second month of his pro career. When he's on the court, we're all like the neighbor kid from The Incredibles, waiting for "something amazing" to happen (I guess). The fact that this guy is also personable, funny, telegenic and smart - well, of course the league wants him to be their face.

Winning in the NBA starts with a superstar - now that the Clippers have one, suddenly their history matters less. The team is no longer perceived as losers, because Griffin is the superstar that allows them to be winners. It doesn't even mean that they are contenders now, nor does it guarantee they ever will be. But with the superstar in place, they have the potential to be, and that changes things. And players get that. That's why the Clippers are suddenly an attractive destination for free agents, for the first time ever. I mean, LA has always been LA. The market size, the weather, the beaches - none of that changed. Free agents now have the chance to play next to Blake Griffin, and who doesn't want to do that?

So few people looked at the SI cover and said "Watch out, Clippers curse plus SI cover curse! Poor Blake Griffin!" They said "I can't wait for the season to start so I can see Griffin play." Around the same time, the NBA decided to add a couple of games to it's opening day lineup on Christmas Day and lo and behold it included a Clippers game. The NBA can't wait to showcase Griffin again; he'll make fans forget the lockout in a hurry. Ten NBA teams are playing on Christmas. They include all four conference finalists from last season (Mavs, Heat, Bulls and Thunder), plus the three most storied franchises in NBA history (Lakers, Knicks and Celtics), Dwight Howard's Magic team - and Clippers at Golden State. Let's be clear - the NBA didn't add that game because of the Warriors. They wanted a Blake Griffin game, and Oakland was the best place to host it.

Of course, the SI cover curse is an obvious case of confirmation bias. With 52 covers a year (actually, a lot more than that now with regional covers) there are bound to be some misfortunes for those featured. No one ever talks about the players who are featured on the cover and then have a great week. Personally, I think it's particularly funny when some underdog story is featured on the cover, and then they lose the following week. Well, is that particularly surprising? They were on the cover because they were exceeding expectations to that point, and invariably the cover precedes a major showdown game, which is why it's news. So the overachieving team loses in the showdown, and we call that a jinx?

The closest thing there was to a curse for the Clippers was the simple fact that they were continually irrelevant on the NBA landscape. But it's a new era now - this team matters.