Way back at the beginning of his rookie season, a post about sports book odds and Blake Griffin caught my eye. In it, they had the likelihood of Griffin making the All Star team as a rookie at even money. At the time, I felt like it would have been a safe bet that Griffin would NOT be an All Star - obviously I was wrong about that. Griffin arrived on the scene, both from a productivity and a national popularity standpoint, faster than anyone imagined he could.

Recently, while watching the Western Conference Finals, I mused to myself that Kevin Durant and Dirk Nowitzki were pretty clearly the best forwards in the West. I began to think about when Griffin might be challenging for one of those two spots, and naturally the idea of starting in the All Star Game soon followed. And then I realized - whether he's one of the top two forwards in the conference or not, Griffin will likely be a starter for the West this coming season, in 2012.

Let's be clear - I'm not saying that Griffin is one of the two best forwards in the West. Not yet anyway. I believe that the distinction goes to Durant and Nowitzki, who are a couple of unique talents and nearly impossible to defend. Beyond those two, you've got Zach Randolph and LaMarcus Aldridge and Pau Gasol, all of whom beat out Griffin in All-NBA  balloting, and justifiably so. But the fact that a fan vote determines the All Star game starters turns the process into a popularity contest, and let's be honest - few players are more popular than Griffin.

When the thought first occurred to me, I wasn't so sure about it. But the more I thought about it and looked into the situation, the more obvious it became. Clearly lots of things can change between now and February. Players could be injured, players could get traded. Heck, the last time the league had labor unrest, the first two months of the season were lost and the All Star Game was canceled, so it's a distinct possibility that there will not be any game at all. But if there is, it's a pretty safe bet that Griffin will be starting for the West.

Consider last year's voting. Griffin, a rookie who had never played an NBA game when he was placed on the ballot, started the season relatively slowly as compared to what was to come. He averaged almost 21 points and 12 rebounds in November, but then increased those averages to 23 and 13.5 in December, 26 and 13.6 in January. Not only was his productivity soaring, but so was his legend, and nightly appearances on SportsCenter with highlight dunks kept him front and center in the public consciousness. Consequently, even as a rookie he did very well in the fan voting, finishing fourth overall. It's also worth noting that he was fast closing the gap on third overall vote getter Gasol - if the voting had gone on another month, Griffin would no doubt have passed Gasol, even last season.

The chart below shows the vote totals released by the NBA during the process, from the first results to the final results. As you can see, in early balloting Griffin was behind both Nowitzki and Tim Duncan, but overtook both of those veterans and was closing in on Gasol when the voting ended. 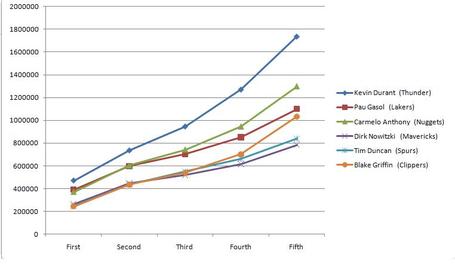 Let me point out now that I am no fan of fan balloting. Turning the process of choosing the starters for the All Star Game over to the fans invariably ends in results that are somewhere between questionable and ludicrous. Yao Ming as the West starting center in 2011, despite playing just five games, is simply the latest (and most easily explainable) example of patently incorrect decisions made by the fans. Players like Allen Iverson and Carmelo Anthony have always been far more popular with fans than their actual play should warrant. And mediocre players like A.C. Green and B.J. Armstrong have ridden the coattails of famous and popular teammates to starting All Star berths on more than one occasion. Conversely, some supremely talented but less spectacularly telegenic players get ignored by the fans. The fact that Nowitzki, in the midst of a season for the ages last year, finished sixth among West forwards behind Anthony and Griffin and Duncan, is almost as demonstrably wrong as the fact that Yao was the starting center.

Therein lies the secret to Griffin's probable future success. Nowitzki, despite his sustained greatness, has never really resonated with the NBA public as he should. (A ring and Finals MVP Award this season might change that some of course.) Similarly, Randolph and Aldridge, playing unspectacularly efficient basketball for small market teams, were almost completely ignored in fan voting last season, neither ever getting as high as tenth in the balloting.

So in this particular beauty contest, Griffin benefits greatly from the mere fact that the voting public is a bit shallow and impressionable. If Griffin's main rivals from a basketball standpoint are indeed the likes of Nowitzki and Gasol and Duncan and Randolph and Aldridge (and I'll throw Kevin Love into the mix as well), then Blake has the decided advantage of being the popular choice. When was the last time that you saw Zach Randolph or LaMarcus Aldridge in a national TV ad campaign? Griffin is currently featured in ads for Kia and Subway and AT&T, not to mention his hilarious spot for the Rage video game. It's a strange position for a Clippers fan to be in to some extent - for years we rooted for under the radar stars like Elton Brand who seemingly got much less recognition than they deserved. Now, we've got one of the most hyped players in the league. It's just nice that he's living up to the hype.

Griffin finished fourth among Western Conference forwards in 2011 voting. Durant was first, and will be again in 2012 no doubt. Carmelo Anthony was second, but with Melo now playing for New York, he'll no longer be on the West ballot. Gasol was third, but that was (a) after a hot start, and (b) playing center with Andrew Bynum out at the beginning of the season. And even at that, Griffin was closing the gap. Another season older, with Bynum no doubt taking more and more of his touches next season, it's reasonable to assume that Gasol will have a pretty big drop off in fan voting. Yes, he's a Laker and that helps, but he's never really resonated with the fans (there is no doubt some xenophobia involved with both Pau and Dirk), and after the playoffs this season, it's likely that he'll be less popular than ever with the general public.

In my mind, looking at it from what is obviously quite a distance, it will probably come down to Griffin or Nowitzki for the second starting spot. Nowitzki deserved it last season, and has only gotten better in the playoffs. He's so ridiculously good right now that he's scary. If he plays next season at a level anywhere close to what he did this season, he would likely deserve to be the starter. But given that he finished sixth last year, almost a quarter of a million votes behind Griffin, I find it hard to believe that he'll suddenly be the darling of the fans next year. After all, Dirk's a 13-year veteran - it's not like he's an unknown that the fans are just now discovering.

So with Melo in New York, Z-Bo, LMA and KLove laboring in NBA backwaters, and Dirk and Pau suffering from a relative lack of popularity that may or may not be partly xenophobic, Griffin looks increasing like the obvious winner of this bake off. And that's to say nothing of his own increasing popularity. The voting that left him fourth last season concluded in mid January - less than half way into his rookie season. That was before he was Rookie of the Year. Before he won the Slam Dunk Contest. Before he played in the All Star Game. Before he had recorded a triple double. The bottom line is that Griffin will be the darling of the NBA next season, even more so than he was last season. All of this presumes of course that Griffin continues to be the player he was last season and even improves, but that seems like a safe assumption as well.

All of which means that Griffin will soon be a fixture in the starting lineup of the Western Conference, perhaps even before he deserves to be. Hopefully, he'll also deserve the honor sooner rather than later.