Mysteries of the NBA Lockout - Part 2B - Back to the Money

Share All sharing options for: Mysteries of the NBA Lockout - Part 2B - Back to the Money

The longer the lockout goes on, the more I try to understand it all, the more mysterious it gets. At the most basic level, there's the mystery of whether the league is actually losing money. They say yes, but the closest thing we have to a legitimate outside source (Forbes magazine) says no. But there are other, smaller puzzlements along the way as well. In the absence of almost any other news, I've decided to write a series focusing on the lockout mysteries that currently have me scratching my head.

Mystery the first - Why Does the League Want a Hard Salary Cap When They Already Have One?

Mystery the second - Where Did the Money Go?

Mystery the third - Why Does David Stern Still Have a Job?

Which brings us to:

Mystery the second, Part B - Did the Money Go into Training Facilities?

Don't worry, part 4 of the series on the question of revenue sharing is still on the way. But after looking into the question of expenses a little bit more, I decided a follow-up post was in order. In Part 2, we examined the question of what seems to be out-of-control expenses in the NBA, outside of player salaries. After all, player salaries have been fixed at 57% of Basketball Related Income (BRI) since 1999, and this year the owners actually had to add money into the salary pool at the end of the season just to reach that level. So innuendo and bravado notwithstanding, it's certainly not salary inflation that is causing the league to lose more money each year - after all, salaries have, by definition, been flat as a percentage of BRI for 13 seasons now.

So the obvious conclusion is that the teams must be spending a lot more money in these past dozens years or so on something other than salaries. Without question, one such area is interest. As team valuations have increased, as new owners have entered the league at higher and higher price points, those new owners tend to be significantly more leveraged than owners of the past. So interest payments are necessarily higher, and are without a doubt a big chunk of the $340M the league claims to have lost last season. Then again, there's some dispute as to whether those interest figures should be included in this discussion - after all, plenty of businesses focus on EBITDA (earnings before interest, taxes, depreciation and amortization) when promoting their financial health. More to the point, the NBA also claims to have lost money at the EBITDA level for at least six consecutive seasons, so it seems still other, concrete expenses have been spiraling upward.

We've discussed what I'll call the Cuban-effect for lack of a better term: the inflationary pressure to provide a higher level of service for the players since billionaire Mark Cuban bought the Dallas Mavericks in 2001. Private jets (or at least de luxe charters), five star hotels and team chefs have more or less become standard operating procedure in the last decade. That higher level of service clearly carries a much higher price tag. Nonetheless, for businesses that spent on average well over $60M on player salaries alone last season, those additional expenses would seem to be relatively small in comparison.

In the comments section of that earlier post, someone raised the question of the Clippers training facility and the expenses associated with it. Like airplanes and hotels and meals, top of the line practice facilities and the player-friendly features associated with them cost money - lots of it. And with the presence of a restrictive salary cap, teams have to differentiate themselves to players however they can. The Clippers opened their state of the art training center in 2008 - and they were among the last teams in the league to do so. But only a decade earlier, very few teams had them.

My research indicates that in 1998, at the time of the last lockout, when the broad strokes of the current CBA were negotiated between the players and the league, as few as five NBA teams had dedicated practice facilities. The rest of the league made do holding training camps and practices at some combination of local colleges and health clubs or on the main court at their arena when they could get it. Three teams that were among the earliest to provide dedicated practice facilities were the Detroit Pistons, Chicago Bulls and Phoenix Suns. It's little wonder that a trend soon developed, since the Bulls and Pistons were the two most successful franchises of the late 80s and early 90s, while the Suns were considered one of the most player-friendly organizations, and seemed to be able to consistently sign free agents at below their market value (Danny Manning signed a 1Y/$1M with them in 1994).

Today, 28 out of 30 teams have a dedicated practice facility (according to my research, only New Orleans and Philadelphia do not have one). Half of those 28 are designed into the team's arena - the Suns also started that trend. When the state of the art US Air Center (called America West Arena at the time) opened in 1992, it included a practice facility and training equipment for the team's use. Most of the arenas to open since 1998 have included team training facilities. 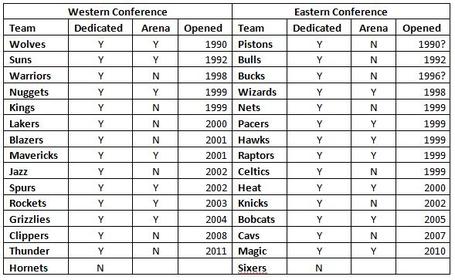 Note: The above table represents my best effort at compiling this information. If you feel any of this information is in error, please indicate as much in the comments with any sources you may have. Thanks to the NBA bloggers of SBNation for helping me compile this data.

For the 28 teams that have them, in many cases the facility is dedicated solely to the team. In some cases, it may be shared with a WNBA team (in the case of the Lakers, the training facility also includes ice rinks and is shared by the Lakers, Sparks and LA Kings). Regardless, you can rest assured that the needs of the NBA team come first.

If you've ever been to the Clippers training center in Playa Vista, you know that these are beautiful facilities. Playa Vista has two NBA full courts, complete with scoreboards and shot clocks above the baskets, with many more baskets around the sides. The weight room is state of the art as is the film room; the coach and GM have offices overlooking the court; there's a lounge with a pool table and flat screen TVs everywhere. And while the Clippers like to say that their facility is the best in the NBA, the descriptions of all the others sound more or less the same. This is simply part of the cost of doing business in the NBA today.

In fact, it's become such an important part of running a first class NBA team, that when the Sonics moved to Oklahoma City, they bought a TEMPORARY training facility while their permanent facility (built for them by the city) was being completed - apparently it was unacceptable to practice at a local university even for a few seasons. Their brand new permanent home is scheduled to open within the month, and will no doubt push the bar just a bit higher for everyone.

But it wasn't really that way back in 1998. From five teams (17%) in 1998 to 28 teams (93%) in 2008 qualifies as a full fledged trend - and it seems reasonable to assume that the associated expenses have been significant. It's not just the expense of the building itself - these facilities require a staff to run them, clean them, maintain them, secure them. There are property taxes and insurance to be paid. This is not a minor expense.

I don't have any overall cost estimates for you, but I do know this. When the Maloofs were in discussions with Henry Samueli and the City of Anaheim about moving the 'Royals' to Orange County, one of the main concessions by the city was $75M in new bonds, of which $25M was to build a new training facility. So I think it's safe to say that training facilities represent a major expense to NBA teams.

It is therefore my assumption that the new ubiquity of training facilities, along with airplanes and hotels and the like, goes a long way towards explaining the disproportionate increase in 'other' expenses over the course of the last decade or so.

It's worth noting that teams may recently have found a revenue stream to help offset this particular expense. The NBA has granted teams the right to sell naming rights for practice facilities and on practice uniforms. The Nets and the Wolves are among the first teams to take advantage of this opportunity.

But for now we can assume these facilities are mostly expense, and if it helps to explain the situation, it may also inform the solution to some extent. Put simply, the life of an NBA player was never particularly hard, but in relative terms, it's significantly easier today than it was in the 90s. Back then they were flying commercial flights instead of charters, staying at the Marriott instead of the Four Seasons, and waiting their turn for the weight machine at the local health club. Let's put it into terms that would apply to anyone - if you have two job offers, and one includes significant 'quality of life' advantages (a better location, a better work environment, a company car or a health club membership, whatever), you're going to take that into consideration. You might take the 'quality of life' job, even if it pays less money.

The players negotiated 57% of BRI back in 1999. But there's little question that the owners have increased their cost structures since that time, at least partly if not mostly on services and facilities that improve the players' quality of life. So it's not unreasonable that the players could take a lower percentage now, and still come out ahead of where they were. The players have already offered to take 54.3% - an offer the league scoffed at (they're asking for a draconian 40%).

In the end, I feel like the league is doing itself a disservice in keeping everyone guessing. If, as I suspect, a significant portion of their additional costs are going directly to things that benefit players, it would behoove them to say so. But in the current environment, which is decidedly lacking in 'good faith', they seem uninterested in sharing information, or in having any sort of honest discussion. The current strategy - and it's a good one, don't get me wrong - is to stonewall until the players start missing paychecks, on the assumption that the union's current resolve will weaken at that point.

Unfortunately for the fans, that strategy more or less requires at least part of the season to be lost. Meanwhile that beautiful facility in Playa Vista sits pretty much empty. Maybe they'll let us play a Clips Nation pick up game there.