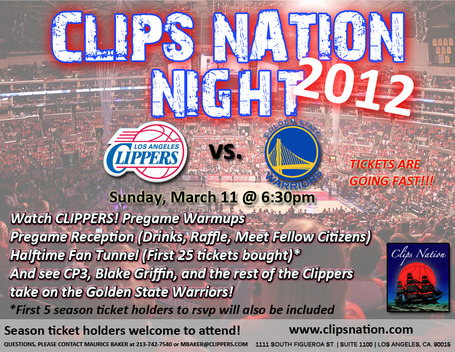 Which makes it a little tougher to get great group deals for things like Clips Nation Night.

Even so, our good friends Sam Yarin (citizen besaje) and Maurice Baker at the Clippers have put a great package together for us for Clips Nation Night 2012. With the increased demand, we've had to plan a little further out, so we're looking at the Clippers-Warriors game on March 11. That's a Sunday night game with a 6:30 tip, which is perfect, because it let's everyone get there but doesn't keep people out too late. Well, it's perfect for me anyway.

Here are the details:

If you went to the last Clips Nation Night last season against Toronto, you know that there were some mix ups with where they placed us for watching warmups and with the reception room before the game. It was still fun, but I have been assured that we will have no such issues this time around.

If you are a season ticket holder and wish to attend the event, simply email Maurice (mbaker at clippers.com) with your account number to let him know you're coming.

Note: Only people that buy tickets through the link or season ticket holders that email Maurice will be eligible for the event.

This is a great chance to meet the fellow Citizens of Clips Nation, to talk some basketball and see a game. Let's have a huge turnout this time. Remember to act fast on these tickets -- the Clippers are a hot ticket right now, so we're not the only ones that want to attend (for a change).