For three weeks this preseason, we'll be publishing Player Previews for each of the 15 players currently under contract with the Clippers. In some cases there may not be much difference from last season's Exit Interviews, but the team does have seven new faces, and there were some significant developments over the off-season for some of the returning players as well, so let's get caught up with all of them before the season starts. Today's edition, fifth year center DeAndre Jordan

There comes a time when the boy realizes that he must become a man. Our big, loveable, goofball seems to have hit that inflection point and his play during the preseason brings him one step closer to proving it. One step closer, but not yet a foundation on which to base concrete opinion. He has yet to face true adversity under pressure situations; and it is under those kinds of conditions where a man's true character is revealed.

One thing is clear though: he's not messing around. DeAndre has put in a serious amount of work, realizing that his contributions and ability to stay on the floor could make or break the Clippers post season aspirations. Nearly all aspects of his game looks improved, DeAndre's footwork looks better, he looks more decisive, he stays planted on ball fakes and most surprising is the addition of a post game. Unfortunately, his biggest weakness is still his biggest weakness. Through six pre-season games, he's attempted 44 free throws and made 13 of them (29.5%). If you've ever been one to try to change your form on anything, you'll understand that it is no easy task, mentally or physically. Hopefully, it is one step back and two steps forward.

This is not to say he hasn't worked hard before. DeAndre's a worker, however due to his carefree demeanor his work ethic often gets overlooked. Maybe he hasn't packed on the muscle we all would have liked, but you don't improve your game every season, by not working at it. Despite being the target of jokes due to his poor free throw shooting, he's actually managed to improve it by a compound annual rate of 8.1% (it also helps that his starting point was 38.5%).

DeAndre has shown glimpses in the past. Early last season, he had a string of games where it looked like he was ready to break out. Brimming with confidence, calling himself the defensive anchor and dunked on every man in sight. I'll always remember when he put Bynum and Pau in a poster, two-for-one. During that stretch of ten games, he was averaging 10.4 points, 10.5 rebounds and 3.1 blocks in 31 minutes per game. Then something happened, as the season went on chips in the armor started showing. DeAndre missed a couple of crucial rotations, made some bad plays on defense, everyone got down on him and he likely got down on himself. February 6th rolled around and Kenyon Martin joined the team. His margin for error was decreasing and Kenyon started to eat up his minutes. The following ten games he averaged 6.8 points, 8.9 rebounds and 1.7 blocks in 24 minutes. Eventually, he lost confidence from the coaching staff and was no longer closing out games.

This season is a bit different, the most critical factor for him to remain on the floor (no, not free throw shooting) seems to have been improved upon. With all the talk of an improved offensive post game, I'm more excited about his development on the defensive end. While offense can sometimes be a mirage in the preseason, defense usually translates well. He hasn't been tested by an "elite" center yet, but what he's shown so far has been encouraging. He's played solid defense, both man and team. Last year he had the tendency to go for the monster block, while leaving his man open. This year, he is still meeting his block quota, while managing to rotate well and keeping his man in check. Against Al Jefferson, the improved man to man defense was evident. The DeAndre of the past would always bite on Jefferson's fakes, in their match-ups this year he held his ground, kept planted and used his length and position to bother big Al. Loved it.

If he is, who we think he is, history suggests a breakout. For high ceiling, talented, big man "projects," history has shown that at some point...something just clicks and for some magic reason, they just "get it." Tyson Chandler "got it" in his fourth year, Camby in his third (and then made another jump in his fifth), Noah clicked in his fourth and Javale McGee...is still finding his way.

Whether age, number of years as a pro or some combination of both is the primary factor, the pattern is similar: they were all terrible their first two years and at some point made a large leap in effectiveness between years three and five, mainly due to improvement on defense.

DeAndre's development seem relatively in-line when taking a look at his closest comparisons at age 23. He's at the comp average in nearly every category except for points (and that is mostly due to less usage). He's actually above average in win shares.

As a fourth year pro, Jordan was slightly behind his comps because Camby, Noah and Chandler had already broken out. Their defensive ratings skyrocketed, each allowing less then 100 points per 100 possessions. In all cases, the highest win share gain was in unison with a sudden leap in defense ratings. Camby went from allowing 107 points to only 93 the following year. Now that he has one year as a starter under his belt and a full training camp, there's a strong case that DeAndre could do the same. I'm a firm believer that defense improves with maturity. 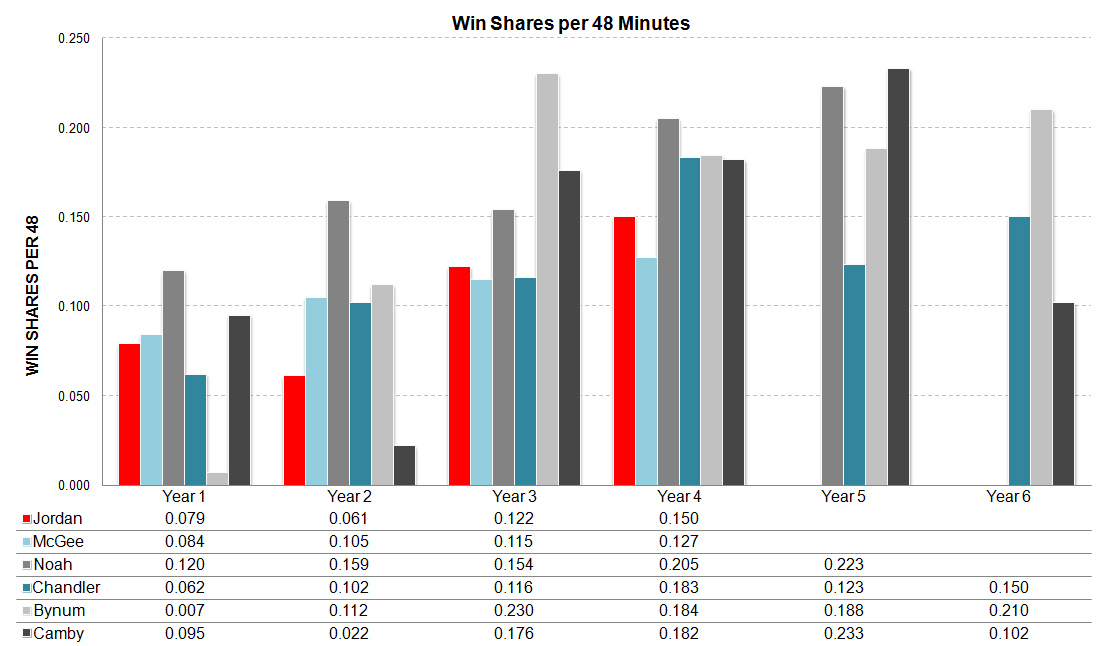 If preseason is any indication, this may be DeAndre's moment of maturation. He's been saying the right things and carries himself with a greater sense of focus. It's no longer a game, it's a battle, not meant for boys, but hardened warriors.

Now is the time for him to earn his paycheck. The importance of his emergence to this team's success should not be underestimated. As they go deeper into the playoffs, they will need someone who can protect the rim against the Tony Parkers and Russell Westbrooks. They will need someone to slow down (emphasize slow down, not stop) the Dwight Howards and Tim Duncans. That's where DeAndre can be not just a man, but the man.