Timeout or no timeout? What to do on a final possession

The Clippers had a chance to win the game in Oklahoma City on their final possession. They chose not to call time out and Chris Paul missed at the buzzer. Was it the right call?

Share All sharing options for: Timeout or no timeout? What to do on a final possession

A word about the final play of regulation in the Clippers overtime loss to the Thunder in Oklahoma City.

By my count, the Clippers had a timeout left. Vinny Del Negro had been running some offense/defense substitutions in the quarter, shuttling Crawford and Bledsoe, so Bledsoe was in for the final defensive possession. The Clippers got the stop with just over 20 seconds remaining, and clearly wanted to hold for one shot, which let them win it or head into overtime.

In most cases, I prefer when coaches eschew calling timeout on that last possession. It's especially useful if you're trailing to go quick and try to get a transition bucket before the defense is set because you know they're going to dig in defensively if you give them a chance. Remember, while you're making changes and setting up your play during a timeout, it also allows the defense to get set, adjust the personnel, and discuss how they want to play things. When you've got Chris Paul on your team, the ultimate coach on the floor, you generally have the advantage because odds are the other team doesn't have a leader of the same caliber, so by taking the bench out of the equation the Clippers will almost always come out ahead. Nine times out of ten you take your chances without the timeout.

But I think this may have been that tenth case, for several reasons. First and foremost, Paul was 1 for 11 at the time. Some nights the ball just isn't falling. I personally don't really believe in the hot hand, but surely there's such a thing as a cold hand. Maybe he wasn't feeling great, maybe his thumb was hurting, I don't know -- but look at his shot chart and tell me he was the best option there. 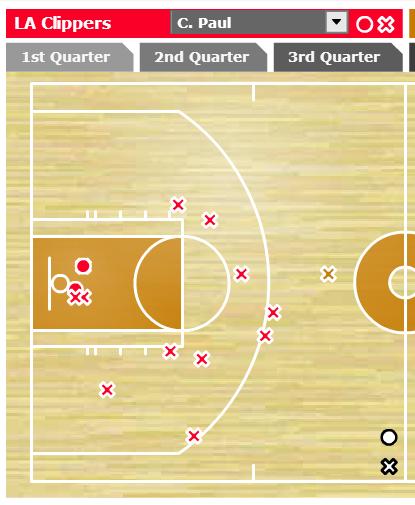 More importantly, you've been playing offense/defense in the quarter -- and you've got your leading scorer on the season, one of the toughest man-to-man covers in the game, sitting on the bench. You're holding for one shot, so you're not wasting a transition advantage by calling timeout. Why not stop the game and get Crawford in there?

Now OKC was going to put in better defenders if you stop the clock. Thabo Sefolosha was out of the game at the time, so the perimeter matchups were Paul and Eric Bledsoe against Russell Westbrook and Kevin Martin. Martin is considered a poor defender, and it's clear what the Clippers wanted to do. They ran a 1-2 pick and roll with Paul and Bledsoe early in the clock, hoping to get Martin to switch onto Paul, figuring that was where their advantage lay. But OKC refused to switch as Westbrook fought over the top of the screens -- which would usually lead to Paul turning the corner and heading into the paint, but he didn't want to do that with so much time on the clock, so Westbrook was able to stay on him.

(Good for Scott Brooks on that, incidentally. Way too many teams switch that screen far too easily in that situation, handing the offense exactly what they want without a struggle. Paul Pierce makes his living getting the switch late in the game on the high pick and roll, and about 80 percent of the time the defense doesn't have to switch, they just choose to switch because that was their original game plan.)

So Del Negro's choice boiled down to Paul and Bledsoe against Westbrook and Martin or Paul and Crawford (the better scorer) against Westbrook and Sefolosha (the much better defender). Since they didn't score, of course the obvious thing is to say he should have called the timeout and gotten Crawford in the game -- hindsight is 20-20. But one can see what he was doing -- he believed that Paul on Martin was by far the best matchup he was going to get in that situation, and he could only get that bypassing the timeout. He thought they could get the switch -- they didn't.

It's a tough call. I actually have a ton of respect for Del Negro going the way he did, because let's face facts, the conventional wisdom is to call the timeout. I think I would have given Crawford the chance to win the game based mainly on how much Paul had struggled -- but it's certainly not easy to take the ball out of CP3's hands in that situation.