Just how good is the Clipper bench?

In one of the other threads, I noticed a number of comments expressing concern that the Clippers were relying too much on their bench. This concern, which I've shared at times, inspired me to dig a little deeper into the subject, and to see what the numbers say.

Share All sharing options for: Just how good is the Clipper bench?

We've all seen it a number of times this season: the starters play a back and forth game with the opposition, trading the lead multiple times, until the start of the fourth quarter where the bench comes in and completely smothers the opposition, bailing out the less-than-impressive starters. And the starters have been less impressive, right? I mean, it's never the starters who look dominant. They aren't bad by any stretch of the imagination, but they don't seem to know their style as much as the bench. The bench plays defense, and then gets out in transition. They get stops, and then they get buckets. They almost never walk the ball up as they always seem to be moving in fast-forward. They've been so impressive, they've earned the nickname, "A Tribe Called Bench." 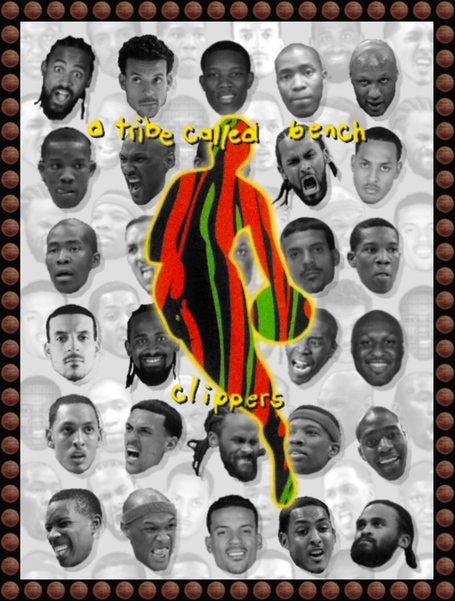 (That picture took me way longer to make than I thought it would. SO ENJOY IT.)

At 82games.com, you can see different 5-man groups, and you can see how many points they score per possession ("off") and how many points they allow per possession ("def"). I figured that this simple stat would be a good, objective way of measuring the success of the different groups that the Clippers put on the floor. What I found wasn't all that surprising.

Lineups involving Paul-Butler-Griffin-Jordan (and any SG) have, in 341 minutes this year, scored an average of 1.12 points per possession (PPP). Considering the most efficient play in basketball is the cutting man, which scores at 1.12 PPP, that's pretty great. However, these lineups have also allowed 1.05 PPP. This is not good defense, and as a result, the differential of 0.07 isn't as great as some of the other elite lineups out there. It's not bad, by any means, but it's not that good either.

On the other hand, lineups involving the Tribe of Bledsoe-Crawford-Barnes (and any combination of Odom, Turiaf, and Hollins) have, in 199 minutes this year, scored an average of 1.03 PPP (not bad), and have allowed only 0.89 PPP. That's ridiculously good. In fact, it's better than any of the elite lineups I'm going to discuss here. That 0.14 differential is ELITE.

For some reference, I've also looked at some other well-known combos from the elite teams in the league:

Couple things to take away from this. First, the Clips' starters aren't really playing so bad, when looking at the other elite groups. Offensively, all of the elite groups are scoring at about the same rate, with the exception of the New York and San Antonio squads.

The New York trio is helped by the fact that there are a number of Knicks that are playing way beyond their career norms. Jason Kidd, who plays regularly with that trio, is shooting 50% from downtown, Felton and Melo are each shooting over 40%, and Ronnie Brewer is shooting over 38%. That can't possibly hold up all season long. The San Antonio group has a very small sample size, so that could just be an outlier (though, we've seen first-hand how good those guys are when healthy).

Second, of groups that haven't been hit by injury (Miami/San Antonio), the Clippers' quartet has logged far fewer minutes than the other elite groups (New York/Oklahoma City/Memphis). For example, Memphis' four starters are playing an average of 36 minutes per game, while the Clippers only have Griffin/Paul playing 33 minutes per game, and no one else playing more than 30. Oh, and if that Miami trio looks misleading because they are having a funky year, last year that same group, in 941 minutes, scored an average of 1.08 PPP, and allowed 0.98 PPP, for a differential of 0.10. The Tribe is still better.

It would take more time than I have right now to verify it, but I'm supremely confident that the Clippers' bench is one of the top defensive squads in the league. What's great about Vinny Del Negro's coaching philosophy is that by maintaining the cohesion of the bench (by switching Willie Green from starter to benchwarmer, depending on Billups' health), he's helped create a group with its own chemistry, separate from the starters. They are a wholly different team, bringing a different element to the game.

Now, it's common knowledge that in the playoffs, rotations shorten, but I'm not entirely sure that will be a problem for the Clippers. But Erik, you say, how will the Clippers get stops if they are playing more of the group that allows 1.05 PPP, and less of the group that allows 0.89 PPP? Because there's a secret, hidden lineup that I haven't mentioned yet. It's the "Voltron" of lineups.

This group, which Vinny appears to use to finish most close games, is the quintet of Paul-Crawford-Barnes-Griffin-Jordan. Though it's only been 50 minutes, this group has been scoring at a rate of 1.44 PPP and only allowing 0.89 PPP, for a differential of 0.55. Holy friggin' crap, Batman. Are you serious? Of course I'm serious. I don't joke about these kinds of things. In those 50 minutes, they've managed to outscore their opponents by 54 points. In fact, that unit's only been outscored twice all season (and outscored opponents 10 times). Those are the kinds of numbers you want to see from your starters.

And if you need more reassurance about the playoffs, the Paul-Billups-Butler-Griffin-Jordan group has scored 1.20 PPP and allowed 1.02 PPP in 49 minuts. Sure, it's no Voltron, but it's nice to see two probable playoff groups doing damage in almost 100 minutes on the court. The real culprit for the weak starting lineup is that the typical Paul-Green-Butler-Griffin-Jordan group has only scored 1.11 PPP and allowed 1.07 PPP, and is only +14 in 231 minutes. So let's just hope that injuries don't result in that lineup being featured heavily in the playoffs. That group's played less than a quarter of the total minutes, but either way, they're scoring more than they're allowing, against the 2nd hardest schedule in the league thus far.

So I guess all of that is just a long-winded way of saying, "Don't worry. Be happy."