As you should know by now by the appearance of an advertisement directly above, this is a sponsored post.

When Adidas decided to do a "Top Grooming Moments in NBA History" series for each team, I decided to choose one member of the Los Angeles Clippers to spotlight. But who could it be?

Keith Closs with his 'fro and scraggly goatee had to get some consideration. This was one of the great post ABA 'fros to be sure.

The recently departed Dwayne Schintzius rocked arguably the greatest mullet in NBA history for 15 games as a Clipper.

Chris Kaman had a series of looks that would seem to mock the word "grooming" most notably the "Kaveman" hair from 2007, as chronicled in this pictorial.

And certain iconic players in franchise history had equally iconic hair. Bill Walton "The big redhead" and Bob McAdoo and his tremendous side burns come to mind immediately.

But really, there is only one choice at the end of the day. 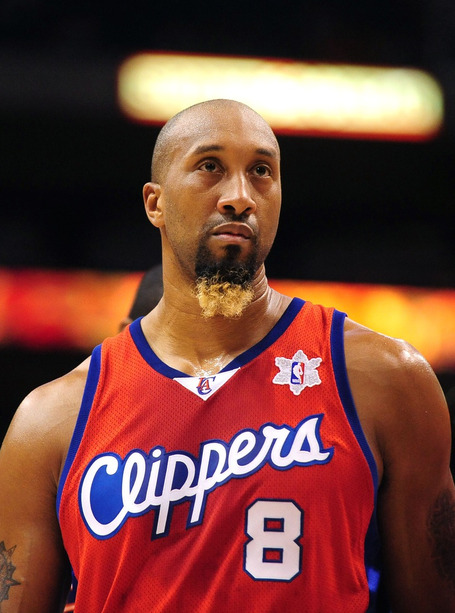 Brian Skinner's two-tone King Tut beard is arguably one of the great facial hair features in the history of the NBA. Skinner first developed the look while playing for the Phoenix Suns, but he rocked it for two full seasons in his second stint as a Clipper from 2008 to 2010.

Skinner was always kind of a bad ass. He was never the most talented player in the NBA, but he always worked hard, and brought a certain toughness to his low post defense.

That King Tut goatee dipped in peroxide was the perfect complement to his on-court persona. Coupled with the shaved head, it said "I'm big, I'm mean, and there's really no telling exactly what I'm capable of. I HAVE A TWO-TONE KING TUT GOATEE -- DO NOT EFF WITH ME!"

Without question, one of the top moments in NBA grooming history.