The Mind of Daryl Morey

Share All sharing options for: The Mind of Daryl Morey 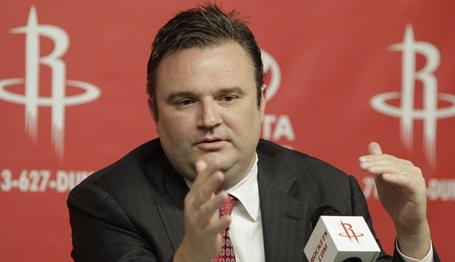 Nothing Clipper related here, just a note to express admiration and wonder at the strange, skilled moves of Daryl Morey, Houston Rockets' GM.

On Tuesday Morey traded small forward Chase Budinger to Minnesota for the 18th pick in this year's draft. Budinger was a rotation player last year, averaging better than twenty three minutes, around ten points, and better than 40% beyond the 3 point arc, he's only 23 years old, and is a cheap date at around $900K this year (he'll be an unrestricted FA next summer). Are you going to get better than that with the 18th pick in the draft?

Yesterday, Morey traded Samuel Dalembert and the 14th pick to the Milwaukee Bucks for Jon Leuer, Jon Brockman, and Shaun Livingston (all on one year deals) and the 12th pick. Dalembert started at center for the Rockets last year and averaged around 20 minutes, 7 points and 7 rebounds. Dalembert might not be much, but he's big and he's reasonably athletic, and, for a center, relatively cheap at 7M this year (only partially-guaranteed). The Rockets moved up two spots and sent away the ONLY center currently on their roster.

It's been reported that Morey is trying to move even further up the draft, packaging a couple of his picks (they now hold their own number 16 pick, along with 12 and 18) and either Kyle Lowry or Kevin Martin, or both, in order to move into the top ten. Reports are Morey's talking to Sacramento about #5, but there are reports regarding Golden State at #7, or Toronto at #8.

Daryl Morey is swinging for the fences. There are two prevalent theories. The first is that that Morey's looking to rein in two top picks and offer them to the Orlando Magic for a one year rental on superstar Dwight Howard. But Howard and his management team have repeatedly "hinted" that Howard has no interest in Houston. Morey's betting he and coach Kevin McHale can convince the restless center to sign an extension and anchor the Rockets for the next six years.

Morey's carefully whittled down his payroll. If he rolls the dice on Howard for a year, expect him to launch a massive push to bring in a top flight point guard. We'll likely see him immediately make a play for Deron Williams, Steve Nash. Failing that, expect him next year to go after (shudder) Chris Paul.

The second theory is that Morey loves Andre Drummond, the big, raw center from Connecticut. There are more than a few prognosticators who believe Drummond might have as much upside as anyone in the draft. If he Morey can get into the top ten, he might be able steal Drummond, a legit 7-footer who weighs in at 280 pounds with a 7'6" wingspan. He's big. Really big. With Kevin McHale to guide him, the sky's the limit.

Of course, Houston's got a third parachute. The Lakers are desperate for a point guard, and Houston's got Lowry. How little can Morey give Jim Buss for Pau Gasol? (Weirdly, I like this deal as much as I like the first two. In my mind, Gasol's still a top fifteen player. Lowry, a pick, and some parts for Gasol is highway robbery. If he can get Drummond AND Gasol... Houston's HUGE.)

Daryl Morey's in his sixth year at Houston. He's smart, secretive, and a bit of an enigma. It took him four years to get out from under the burdensome contracts of Tracy McGrady and Yao Ming. Last year, he couldn't quite turn over his roster the way he would have liked in the lockout-shortened offseason (he was as crippled by David Stern's deal-killing as the Lakers think they were). But this year he's determined to change his team's future. A lineup of Kevin Martin, Kyle Lowry, Chase Budinger, Luis Scola, and Sam Dalembert gets you exactly nowhere. You can add all the mid-to-late first round pieces you want to that stew and it won't get you to the promised land. You need superstars and you have to spend to get them. Morey's stepping up and taking his shot. He's like a juggler with all the plates in the air and the building's on fire. He could wind up with nothing but third degree burns, a blowed up roster, and some okay rookies... or he could wind up with the blue ribbon.

Fun to watch? You bet. But I'm betting on Morey.