Here's a basic breakdown of the Los Angeles Clippers' salary situation. Afterwards, we will look at the different exceptions, what they mean, if the Clippers can use them, and how much they are worth. 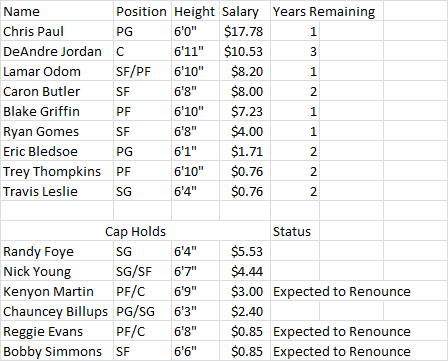 That makes for $76.04 million total, not counting cap holds that will be renounced.

The salary cap is expected to hold at 58 million, with the luxury tax line at 70.3 million. This means that the Clippers, if they re-sign Young, Foye, and Billups up to their cap hold, will be over the tax. Fortunately, you can at least bet that Foye won't be getting 5.53 million, so Sterling doesn't have to worry about that... yet.

Here's a breakdown of some exceptions:

So, while you're fantasizing about this free agent and that free agent, know your facts:

What makes the most sense to me would be to retain Billups and Young, allow Foye to walk, use the Mid-Level on a starting SG, and use the Bi-Annual on a big body as a backup center.

I think the Clippers are only keeping Foye's hold in case either Billups or Young gets a better offer elsewhere and leaves LA.

Steve will be around later with a Free Agency Preview.