Share All sharing options for: Grant Hill Introduced by Clippers... 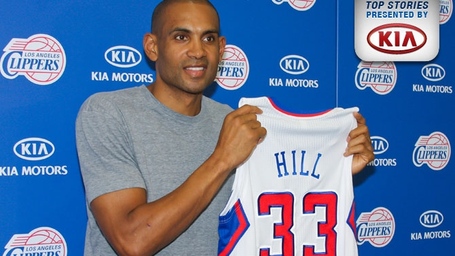 I was hoping there'd be some media coverage of Grant HIll's introduction as a Los Angeles Clipper today, but so far, on this sleepy Friday in mid-July (still hot where I am) there's been almost nothing.

Update: Citizen agolden posted some good stuff in the thread. Arash Markazi posted this story. It includes some better quotes and the interesting detail that Hill recently went to Germany and had the same "platelet rich" procedure that Kobe Bryant had last year.

Maybe it's that it's warm outside. Maybe it's because it's July and training camp doesn't even start for another couple of months, but this has to be the most casual and laid back introduction of a player ever. (Grant Hill appeared in pics wearing a T-shirt and shorts). The only thing I could find on the intro at all were some tweets from Clipper media personality Madelyn Burke. A couple of pics here and here. And some quotes, all collected here. Excerpts:

- "When I came into the league I used to watch Joe Dumars, I told him I'd never play that long... Apparently I lied!"
- Hill adds he's heard great things about LAC trainers, even from PHX trainers, excited to work w staff... "It seems like everybody says they've got the best training staff in the NBA, so somebody's lying..."
- "You look at teams that win championships... Depth is certainly important."
- Hill on being across town from former teammate Nash: "hopefully wen we play the Lakers, Steve will pass me the ball like he used to"

Finally, if you're starving for detail, here's a really glum and perfunctory interview (might be a couple of days old) wherein Ms. Burke grills Clipper Coach Vincent Del Negro. Vinny actually tells us that Grant Hill "plays the right way."