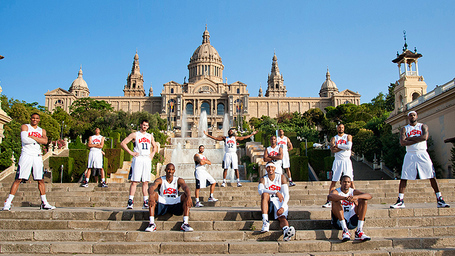 At 6:30 am, tomorrow morning the USA Men's basketball team takes on the French national team in the first of "pool" play (this is Pool A, whatever that means). I imagine it will be broadcast on NBC-TV, but I haven't been able to figure that out. If it's not it will likely be on either Bravo or will certainly be streamed on NBCOlympics.com.

Starting for the US will likely be Chris Paul, Kobe Bryant, Kevin Durant, LeBron James, and Tyson Chandler. Carmelo Anthony will come off the bench (probably playing the infamous stretch four). For France we expect to see Tony Parker, Nando De Colo, Kevin Seraphin, Boris Diaw, and Nicolas Batum. Key reserves are Mickael Gelabale (who played for the Seatlle Supersonics a few years ago) and the Clipper's own Rony Turiaf (who might actually be the starting French center).

That's a pretty good lineup, every one of those guys is currently (or in deColo's case, will soon be) an NBA player. It might have been a better lineup if France was fully stocked. Joachim Noah, Ian Mahinmi, Johan Petro, and Rodrigue Beaubois are all out of action this year.

France won the silver medal in the 2000 Olympics but did not qualify in 2004 or 2008. This year, the team qualified after falling to Spain in the Eurobasket gold medal game.

Obviously, Tony Parker is the star of this team, and should play well against the U.S. No one seems to think France has much of a chance against the American team, but they seem good enough to have a shot at a medal. They might really have a chance at the gold if they were fielding their full team.

The US Olympic team, while an obvious favorite, does have some holes. After Tyson Chandler there is really not another legitimate center on the team. For whatever reason Kevin Love seems to have fallen out of favor with US head coach Mike Krzyzewski, and only noob Anthony Davis figures to see real time at the 5-spot.

I'll put a game thread up at 6am. Bring your cup of tea over to the telly have a look. Maybe we can have an English breakfast together! Fried eggs are good. Black pudding, blood pudding, white pudding, that's uh interesting stuff. A fried tomato is a great way to start the day. Crumpets you say? I do like the occasional scone.