Blake Griffin and The Mid-Range Jumpshot

Clippers PF has received the same criticisms his whole career: "all he can do is dunk". Well, that's just not true.

Share All sharing options for: Blake Griffin and The Mid-Range Jumpshot

All things that we've heard about Blake Griffin in his time in the NBA, seemingly non-stop. People like to assume that since Blake Griffin dunks, he does not do anything else. Which is, well, silly.

When you look at a player's "shooting" statistics on basketball-reference.com (which is the best place on the web for NBA stats, if you do not use it already), they split shooting up into 5 different areas: at the rim, 3-9 feet, 10-15 feet, 16 feet-3pt, and 3pt+. To gauge Blake Griffin's jump shooting, we will only use 10-15 feet and 16 feet-3pt. Anything from 9 feet in hardly qualifies as a jump shot, and Griffin rarely attempts threes. The mid-range shots, however, are a different story. Griffin has taken 37 shots in the 10-15 foot range and 133 shots in the 16 feet-3pt range. He is, in fact, one of only 15 big men in the league who has taken at least 100 shots from either range so far this season.

Using shooting stats from basketball-reference.com, I compiled and formatted a chart in excel to display, side-by-side, the statistics of each of these 15 players. Because I can. 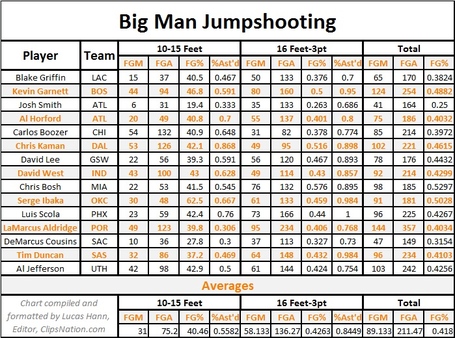 Well, as you can see, the news is not that great. Griffin only shoots 38.2% total on these shots, and the only category where he is above average is in FG% from 10-15 feet... barely. And that's a small sample size.

It is not all bad, though. Think about it. If someone said to you: "Blake Griffin is a worse jump shooter than Kevin Garnett, Al Horford, Carlos Boozer, Chris Kaman, David Lee, David West, Chris Bosh, Serge Ibaka, Luis Scola, LaMarcus Aldridge, Tim Duncan, and Al Jefferson", what you you say? Would you really argue with them? These are some of the best mid-range shooters in basketball (and, in the cases of Duncan and Garnett, history). It should not be surprising that they make these jumpers at a higher clip than Griffin.

If anything, the story told by these stats should be reassuring for Clippers fans: Blake Griffin is just barely below the likes of Al Horford and LaMarcus Aldridge this season. And he's far, far ahead of DeMarcus Cousins and Josh Smith.

The most intriguing column on this chart, however, is the %Ast'd column, which tells what percentage of that player's FGM from that range come off of assists. The remainder (1.0-%Ast'd), therefore, are all shots that the player creates for themselves. Duncan, Ibaka, Bosh, West, Lee, Kaman, Scola, and Garnett- all of whom are well respected in the mid-range, make an incredibly high percentage of their shots off of assists. Blake Griffin is only assisted on 70% of his 16 feet-3pt jump shots, second-lowest to Josh Smith. Luis Scola, by comparison, has been assisted on all 73 of his makes from that range. An overwhelming trend would seem to suggest that the better shooters have higher %Ast'd numbers, meaning that they use set shots on catch-and-shoot plays as opposed to creating jump shots for themselves off of the dribble.

Overall, there are several notable observations to be made from this table. Luis Scola obviously needs someone to create for him, with 100% of his makes assisted. Josh Smith should really stop shooting jump shots, as he has made only 25% of his mid-range shots. Similar conclusions can be drawn for every player.

For Blake Griffin, however, the results are obvious. He's not great at mid-range jumpers, but he's a lot better than your friend who only watches his YouTube highlights says he is.

Blake needs to work on his catch-and-shoot jump shot. Frequently, Griffin will catch the ball at 15-18 feet and hesitate, despite being open. Instead of shooting right away, Blake will allow the defense to recover, and then take one or two dribbles to nowhere before shooting a contested shot from the same spot where he had a wide open attempt seconds earlier.

There are two parts to this problem: confidence and shot preparation. Due to his lackluster reputation and history shooting the ball, both from the mid-range and the free throw line, Blake doesn't like to take these shots and invite the criticism that accompanies his misses. At the end of the day, he is going to have to learn to recognize that his open 15-footer is a good shot, and once he does that he will be able to take it with confidence. This will come in time as he makes more and more and his reputation begins to change.

As far as shot preparation goes, Blake often isn't ready to shoot when he catches the pass. There are a few key components to shot preparation, and, to be frank, Griffin doesn't seem to be familiar with them. First of all, in order to shoot a 15-footer, he should start at 18 feet. As the pass is coming towards him, Blake should step into the pass. This way, he not only has momentum going forwards (to prevent undershooting), but he already has rhythm from taking two steps into his shot, so he can cut out those dribbles, which cost valuable time (and an assist for the passer). The other thing for Griffin (and all shooters) to consider is being low when they step into their shots.

Currently, Blake seems to catch the ball, and then bend his knees, and then elevate for the jump shot. By stepping in low, half the work is done before the ball is caught, thus eliminating much of the time between catch and release, which means less hesitation and better shots with the defense still recovering.

The last thing for Griffin to focus on in his shot preparation is getting his elbow underneath his shot. Obviously, when he releases the ball, his elbow is below his hand and the ball. The earlier that Blake can get his elbow below his hand, the less the angle of his elbow has to change during his shot, and the smoother his release will be.

Ultimately, as long as the young All-NBA forward continues to improve his jump shot form and preparation, and gains more confidence in his catch-and-shoot ability, he'll be fine in the mid-range (who knows- maybe he'll even be deadly).