For three weeks this preseason, we'll be publishing Player Previews for each of the 13 players with guaranteed contracts with the Clippers. In some cases there may not be much difference from last season's Exit Interviews, but the team does have seven new faces, and there were some significant developments over the off-season for some of the returning players as well, so let's get caught up with all of them before the season starts. Next up, new back-up point guard, Darren Collison.

When the Clippers completed the three-team-trade that resulted in the losses of both Eric Bledsoe and Caron Butler, my immediate reaction was extremely positive with one little area of concern: the back-up point guard position. While Chris Paul is amazing and most certainly athletic, he doesn’t have the type of 40-minutes-per-game-endurance that a guy like Russell Westbrook has. So naturally, I was worried when looking at those available to back him up.

After spending most of their Mid-level Exception on Matt Barnes (deservedly so, of course), the best the Clippers were going to be able to offer someone was about $2 million per year. There was always Chauncey Billups, but that never seemed like it worked well, given his feelings about coming off the bench. There were expensive guards like Jarrett Jack, Jose Calderon, Monta Ellis, and Darren Collison, all starters (or 6th men), but the Clippers wouldn’t be able to afford them. That left middle-of-the-road guards like Aaron Brooks, Rodrigue Beaubois, Toney Douglas, and Daniel Gibson.  Toney Douglas seemed like a solid choice, but he was snatched up by the Golden State Warriors. I even briefly thought about Shaun Livingston, but I’d basically already written off the back-up point guard position as nothing special, and maybe even a weak point on the Clipper roster.

Then, to my surprise, the Clippers were able to sign Darren Collison, a point guard who started for a .500 team, but somehow had no problem with backing up Chris Paul, for that tiny $2 million salary. The guy had played pretty well in Dallas and was due for a decent payday with a lower-echelon team, but he decided to join the Clippers.

Collison, like Bledsoe before him, is a creator of chaos. But in Collison’s case, it’s a controlled chaos. He’s not much in the way of future potential, as we know what he is. He’s always been an efficient, low-volume scorer, with a mid-50’s true-shooting percentage, peaking at more than 57% last year. According to basketball-reference.com, he takes most of his shots either at the rim, or in the mid-to-three-point range. He’s a decent shooter, strong (but not elite) from both long-range and mid-range, and he’s an excellent finisher at the rim for a point guard. You’re never going to rely on him for scoring, but he’s also not a guy the defense can leave open, especially off the ball, where he scores about a third of his points.

Oh, and he’s fast. Really fast. Last year, I remember watching him running circles around Eric Bledsoe, one of the fastest guards in the league. Collison’s style will fit in great with the Clippers’ second unit, assuming it continues to feature both Crawford and Barnes, two of the better on-the-fly players in the league. While I have high hopes that the Clippers will not go 10-deep into the line-up anymore, I think the guard and wing bench players will be utilized just as much, mostly due to the Clippers running more small-ball lineups. When Collison is in with these lineups, it’s going to be pure, blissful chaos on offense, with tons of running.

Of course, despite everything mentioned above, there are a few concerns about Collison. His assist-turnover ratio leaves something to be desired, with almost 1 turnover per 2 assists. That’s not too different from Bledsoe (it’s better) but he’s also not going to get you as many possession-creating steals, blocks, or rebounds as Bledsoe did. But I think we already knew he wasn’t going to be as dynamic as Bledsoe, right? I mean, for a huge portion of last year, Bledsoe was second only to Chris Paul in PER among point guards, and that meant it was a huge waste that there weren’t enough minutes for him. This year, Collison only playing 15-20 minutes a night isn’t going to be much of a waste at all.

Having watched Collison since his days as a Bruin, he’s always had solid defensive fundamentals, but it wasn’t until he played his first season behind Chris Paul in New Orleans that he learned his defensive identity. Like Paul, Collison is quick, and able to probe on defense without leaving his man wide-open. Like Paul, Collison likes to annoy the crap out of anyone and everyone.

He’s not going to slide his feet and force the offensive player into the corner, trapping them and forcing a timeout/turnover, like the two Erics Gordon and Bledsoe once did for the Clippers. Instead, he’s going to constantly go for the steal, and I mean constantly. He’s going to chase defenders through the paint, but then double back and try to sneak one away from the big men. He’s going to use his long arms to pick on second-string point guards, creating fast-break turnovers as they cross the half-court line. He’s going to bother every big man in the post, every single time.

But doesn't that mean he's going to leave his man open a lot?  Well, yeah, but that's the price you pay for chaotic defense.  And let's keep in mind that he still only gets 1.5 steals per 36 minutes (solid, but not great) and he will still get easily bowled over on any defensive switches.  He's no defensive stalwart, but he’s not nearly the defensive liability that he’s sometimes made out to be.  He's found his way to make an impact on defense, and it makes up for most of his defensive liabilities.

Collison at $3.5 million per year would have been a good deal. Collison at $2 million per year is borderline highway robbery. Along with Barnes and Crawford, the Clipper bench looks to be potentially game-changing at the guard and wing positions.  Unlike last year, the Clippers will be relying more on their starters to generate leads, as opposed to the bench.  However, on any given night, the bench still has the capability to completely overwhelm their opponent with some good old controlled chaos, especially if they run small-ball lineups (which are designed to be chaotic).

As I said before, Collison could’ve started on a lottery team, but he chose to back up the best point guard in the league while contending for a championship. I, for one, think he made the right choice.   And so, to show my appreciation, I think it’s time to usher in a new age. 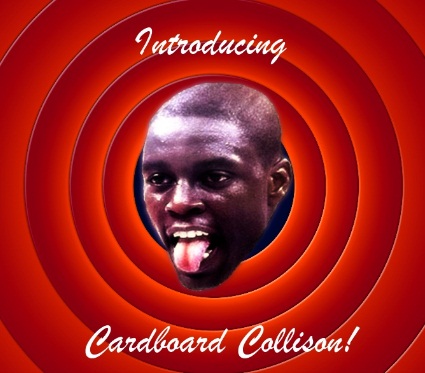 Welcome to the family, Darren.