For three weeks this preseason, we'll be publishing Player Previews for each of the 13 players with guaranteed contracts with the Clippers. In some cases there may not be much difference from last season's Exit Interviews, but the team does have seven new faces, and there were some significant developments over the off-season for some of the returning players as well, so let's get caught up with all of them before the season starts. Next up, the Junk Yard Dog himself, Jared Dudley.

As I mentioned in my previous write-up about Darren Collison, when the Clippers completed the three-team-trade that sent out Eric Bledsoe and Caron Butler for J.J. Redick and Jared Dudley, my initial reaction was overwhelmingly positive. While I lamented the losses of the Clippers’ LeBron-blocking point guard and the toughest player to ever wear a Clipper uniform, I knew that the Clippers were missing one thing last year: consistent shooting.

Somehow, in one of the better trades I’ve seen the Clippers pull off in my decade plus as a fan, the Clippers were able to get two of the most efficient shooters in the NBA. While Redick had an off-year last year (and will likely return to form), Dudley most definitely didn’t, shooting over 39% from downtown. Had he been on last year’s team, Dudley would’ve been third only to Willie Green and Eric Bledsoe (and I think it’s clear that Bledsoe’s percentage was most likely the result of a small sample size). The Clippers immediately remedied their shooting problem, and with a formerly 4th ranked offense, that's pretty much all that was left to do.

But what about the defense? I wondered if they’d lost something on the defensive end, given that Bledsoe and Butler were two of the Clippers’ better defenders. Last year, the Clippers were, for much of the year, among the top 10 defensive teams in the league. They’d relied on forcing turnovers to get easy buckets, but after the all-star break, they went from forcing a very elite 16 turnovers per game to a good, but relatively pedestrian 13 per game. It just wasn’t sustainable, especially when the second, less talented unit was the group doing most of the defensive work.

The defense needed a pick-me-up, and many in the Nation clamored for the Clippers to trade or sign strong individual defenders. Citizens wanted defensive stoppers like Andre Iguodala, but I always felt that an overall team defense focused on limiting possessions and forcing low percentage shots like Doc Rivers’ Thibodeau-inspired defense would be more crucial to the Clippers’ defensive aspirations than strong individual defenders. And I think that with Jared Dudley (and J.J. Redick), the Clippers got exactly what they needed.

Before I keep blabbering on, shouldn’t I find out what my cousin John, a super-mega-die-hard Suns fan, thinks about ol’ Dudders? Isn't that why I asked to do the preview on him? Well, I asked my cousin to give me some thoughts, and here’s what he had to say: 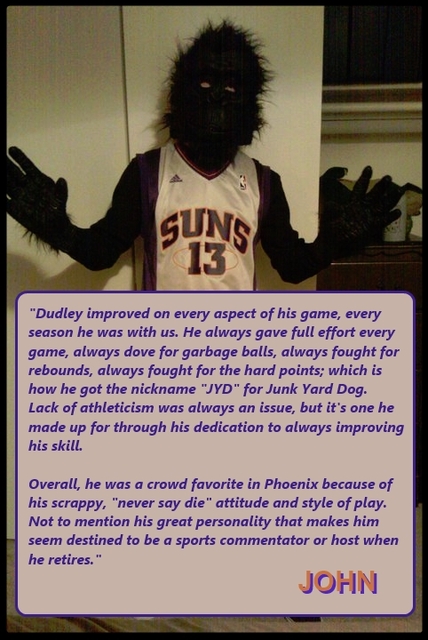 Wow. Beautiful words, John. Maybe wear the Green Man costume next time (you know the one) or at least put on some pants. But no, really, thank you for the input.

(And I have to say, my cousin must know what he's talking about since he was able to come to these conclusions before Dudley was voted by NBA GMs as one of the players to have done the most with the least talent. Atta boy.)

So it sounds like Dudley can be the Clippers' new Tuff Juice, but is he meant to start on this team? Didn't Matt Barnes earn that starting role by playing his butt off last year? Well, I'm happy to say that it may not matter all that much whether Dudley starts or comes off the bench. It appears that his hard-working attitude isn't really swayed by being a reserve player.

Dudley should fit in perfectly with the starting group. He's the safer choice, as compared to Barnes, but as a high percentage shooter, he (and Redick) will create a "pick your poison" nightmare for defenses, who can no longer confidently double team Blake Griffin in the post. And of course, in small-ball lineups, Dudley's ability to guard power forwards (remember, he once was tasked with guarding Mr. Griffin) is invaluable, especially with the less-than-stellar back-up bigs that are currently available.

Throughout his career, Dudley's always shown that he can be a fantastic asset, either with the starting group or filling a bench role. He's always efficient, well-rounded, and generally solid through and through. If his time in Boston (especially during the later years) is any indication, Rivers is the type of coach who isn't afraid to experiment with different starting lineups, so I have no doubt that by season's end, they'll have everything locked down.

Dudley's not perfect, though. His rebound rate leaves a bit to be desired and he's a bit mediocre from the line. Offensively, he's not a great ball-handler, he's not very quick, and he's certainly not a high leaper. But does it even matter? Not really, because he produces. From a scoring perspective, his career 58% TS% is just crazy elite for a shooter, and he's got exactly the skillset required at his position. Perhaps he'll end up starting games, but Barnes (the vastly superior rebounder) will finish them. It really doesn't matter. There's no wrong answer here. Dudley will earn his minutes like he always does: by working hard. Good man.