For three weeks this preseason, we'll be publishing Player Previews for each of the 13 players with guaranteed contracts with the Clippers. In some cases there may not be much difference from last season's Exit Interviews, but the team does have seven new faces, and there were some significant developments over the off-season for some of the returning players as well, so let's get caught up with all of them before the season starts. Next up, All-NBA power forward Blake Griffin.

So, sure, we do these previews, and we do them for all the players on the Los Angeles Clippers roster. But seriously, how much more can I say about Blake Griffin as we await the oh-so-imminent start of the NBA season? I wrote an exit interview on the guy last June. Since then, the word "Griffin" has appeared in the headline of 17 more Clips Nation stories -- no telling how many more stories make mention of him. Six weeks ago I wrote close to two thousand words on the areas where he needs to improve. Less than two weeks ago I wrote another fourteen hundred after he was ranked the 14th best player in the NBA in ESPN's NBARank. What else is there to say people?

I liked the quote from Zach Lowe in a recent Grantland piece: "Griffin's flaws are wildly overstated by critics who just don't like him for some reason." I couldn't agree more, and I've been saying it for a long time. HOWEVER, that is not to say that he does not have flaws. And this would be an awfully good season for him to start to make some serious strides in his game.

The simple fact of the matter is that very few players in the NBA put up the level of production Griffin does at anywhere close to the level of efficiency. I could build some crazy stat that includes points and rebounds and assists and field goal percentage and Griffin would be the only one in the league to reach whatever numbers I decide to cherry pick. But it's not even that complicated. There were two players in the NBA last season who averaged at least 18 points per game while shooting better than 53% from the field -- LeBron James and Blake Griffin. So I don't understand why anyone is questioning whether or not he's all that good -- of course he is. But he can be better.

He can score. He can rebound (though he has been declining as a rebounder for some reason). He's a vastly underrated playmaker. The conventional criticism of Griffin that he's "just a dunker" is absurdly off-base when you consider that he led the league in assists per 36 among players 6'10 and taller. Heck, for all forwards he was third in assists behind LeBron and Josh Smith. He's an improving defender.

What have we seen from Giffin this October? Well his pre-season can only be considered a mild disappointment. We all want to see him dominate -- but maybe he's mature enough at this point to know that he doesn't need to dominate in the pre-season. The jump shot looked better, and it certainly seems like the new offense can generate plenty of them. I asked Doc Rivers if he wants Blake taking so many jumpers and he said "Absolutely; as long as he's open. If he's open that's a good shot." 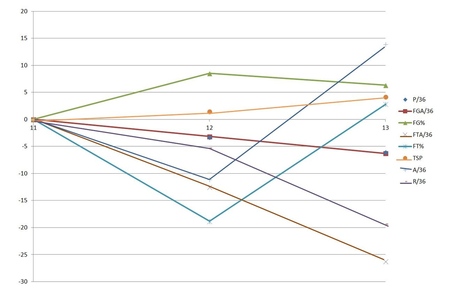 The Clippers were out-rebounded a few too many times in the pre-season, and that is one area of Griffin's game that has steadily declined since he entered the league, as you can see from the graph above. He needs to reverse that rebounding trend while continuing to make what has mostly been steady improvement in other areas of his game.

There is however one other very big thing that the Clippers need Griffin to do. They need him to be a scoring threat late in games, not just at the start. Clearly interior players have more trouble at the end of games -- this is not a problem unique to Blake. As defenses tighten, the perimeter players take on increasingly dominant roles, because they're the ones with the ball in their hands. If passing lanes are shut down into the post, then the only option is for the perimeter guys (in the Clippers' case, Chris Paul) to create shots. Having said that, in tough games and especially in the playoffs, Paul is going to need help. Griffin can no longer be the Clippers leading scorer -- who's also a ghost in the fourth quarter.

His free throw shooting was respectable last season (66%), and more than respectable in the playoffs (81%) so hopefully any notion that teams might foul him is no longer an issue. Let them foul, he'll make them pay. It's time to see the Clippers other all star help CP3 a bit more late in games in pressure situations.

Blake Griffin is already a great player. But the Clippers championship aspirations may hinge on how much better he can be.