It's been far too long since the Clippers and Thunder played a 'normal' game against each other. The Clippers won this one, but a blatantly poor decision to eject Serge Ibaka played a major factor in the outcome.

Just once I'd really like for the Los Angeles Clippers and the Oklahoma City Thunder to play a 'normal' game. A game where all the stars are healthy, where there aren't any ridiculous calls by the referees, any ejections or non-ejections, or just plain anomalies, so we can get some sort of a feel for where these teams stand in relation to one another.

The Clippers were absolutely dreadful in the first half in every aspect of the game except for rebounding. But Serge Ibaka and Matt Barnes were ejected with six seconds remaining in the first half, an exchange that clearly hurt the Thunder more, not to mention an exchange that was wildly unfair to Ibaka who was little more than a bystander in the entire incident. The Clippers played much better in the second half, outscoring OKC by 17 overall and winning somewhat comfortably, but with Kendrick Perkins already missing because of the death of his grandfather, the Thunder were without their starting front court, not to mention their third best player in Ibaka, and it's difficult to read too much into the fact that the Clippers dominated after the intermission.

Honestly, how was Ibaka anything other than wrong place, wrong time on that play? I'm no fan of Ibaka -- he's obviously taken some cheap shots on Griffin over the years, and not just the one you're thinking about. He's kind of a punk. But this wasn't the play that should have gotten him ejected. The initial foul on Griffin was aggressive, but nothing extraordinary. Griffin then pins his arm, which is something I don't quite understand, though it happens quite often in the NBA, and Ibaka reacts to free his arm. The always level headed (/sarcasm/) Barnes immediately overreacts with a shove and nothing much else happened. What exactly was Ibaka's offense? I mean, the fact that he made a fist and cocked his arm to throw a punch was silly in the end -- but as far as I know there's no prohibition of it in the NBA rulebook or even in the vast compendium of unwritten rules.

In the end, as completely dumbfounded as I am that Ibaka was NOT ejected last March, I'm equally dumbfounded that he was ejected tonight. I lambasted the NBA for their inconsistency for their decision regarding Ibaka in last season's altercation -- so I guess we can take consolation in the fact that they are consistently inconsistent.

So, yes, others things happened in this game. Let's see if I can remember any of them.

Chris Paul is now he only player this season with a double-double in every game -- Kevin Love dropped from the double-double ranks with a 33 point, eight rebound effort in Minnesota's romp over Cleveland (terrible game, right?). Blake Griffin on the other hand recorded his seventh points/rebounds double-double in nine games with 22 points and 12 rebounds, not to mention seven assists and three steals. Griffin led a balanced Clippers attack that saw five other players score in double figures, including Jamal Crawford with 20  and all of the other starters as well.

Without Barnes' services in the second half (which he may not have for a while, more on that later) Doc Rivers improvised on his rotations after the intermission. Of course, the Thunder were a bit cattywampus as well with their starting bigs unavailable. OKC trended smaller, playing Russell Westbrook and Reggie Jackson together a lot, and Rivers reacted by leaving Paul on the floor for almost the entirety of the half -- CP3 rested a total of 54 seconds after halftime, and 10 of those came at the end for his curtain call. And here's a news flash -- the Clippers are a better team when Paul is on the floor. He logged a season-high 41 minutes -- which is fine since the Clippers don't play again until Saturday (and don't think for a second that Paul and Rivers were unaware of that fact).

I don't wish to totally discount the Clippers' second half efforts. Yes, they were much better, especially defensively, holding the Thunder to 41 points and under 40% shooting. They forced 15 second half turnovers -- which only managed to balance out the turnover battle, after the Clippers had committed a dozen themselves in the first half. The Clippers also did an excellent job on the glass all night, dominated the rebounding battle to the tune of 50-35. Kevin Durant should get in his teammates' faces over that -- Perkins or no Perkins, Ibaka or no Ibaka, Durant can't be expected to carry the rebounding load while also doing everything else for OKC. 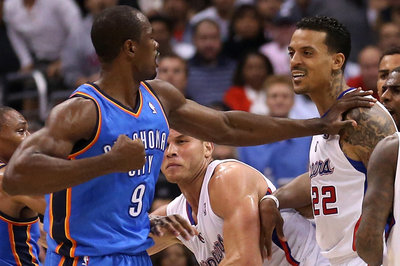 OKC is not a deep team, and losing two starters -- even if one of them is the delightfully dreadful as Perkins -- is a lot to overcome for a thin bench. Steven Adams may be better than anyone expected -- but that's largely due to the fact that no one expecting anything. Coach Scott Brooks was only impressed enough to give Adams nine second half minutes in a game where his other front court alternatives were Ryan Gomes and Hasheem Thabeet. Meanwhile, in his first game against a 2013 playoff team, Jeremy Lamb went 0-5 in 14 minutes. Brooks needed his young reserves to step up if the Thunder were going to have a chance in this one -- and it didn't happen. They'll get other chances -- it's early yet.

I predicted that it would get chippy between Griffin and Ibaka and I really, really wish I hadn't been right. I honestly don't remember the last time I watched a Clippers-Thunder game that didn't have a "BUT" -- The Thunder won, BUT Paul didn't play. The Clippers won, BUT Durant had a terrible night. The Thunder won, BUT Ibaka should have been ejected. And now, the Clippers won, BUT Ibaka should NOT have been ejected.

These teams play again in 10 days. I really hope that we can have a normal, full strength, head-to-head, incident-free encounter then. Somehow, I don't think it's going to happen. Not as far as the incidents go anyway.