Matt Barnes' ill-advised tweet after being ejected Wednesday night will certainly cost him a lot of money, and probably a few games, once the NBA reviews the situation. But it won't change his relationship with his teammates.

Instant access to a global audience and any sort of impulse control issue is a bad combination. So when Matt Barnes got back to the Los Angeles Clippers locker room slightly before the rest of his teammates at halftime of their game against the Oklahoma City Thunder, after having been ejected for an altercation with Serge Ibaka, he probably should have spent more time talking to the twins, and less time on his iPhone.

Bill Murray once said to Punxsutawny Phil "Don't drive angry!" Well, a good corollary to that advice is "Don't tweet angry" -- and really, that's just good advice for all of us.

Barnes' tweet -- since deleted -- made almost instant news. ESPN's J.A. Adande reported about it during the second half of the game. SportsCenter had it as their second story (admittedly because it was related to the top story of the Clippers win over the Thunder).

I'm sure you know already, but here's the edited version of what the tweet said:

Barnes will almost certainly be fined by the league for his use of the n-word on a public platform; we'll see if he's suspended. Kobe Bryant got a $100,000 fine (though no suspension) when cameras caught him using a gay slur towards a referee. And let's face it -- we don't need Grant Hill and Jared Dudley PSA's to explain to us that the n-word is not cool. Barnes didn't even have to be caught in the act -- he said what he said to the entire world.

But there's no one on the Clippers that's going to care now that it's done. Barnes is who he is. The irony of the tweet is that it's baloney in and of itself. We'd all be pretty happy if Barnes would actually put a little more thought into his confrontations -- but he won't. He's certainly not done standing up for his teammates. 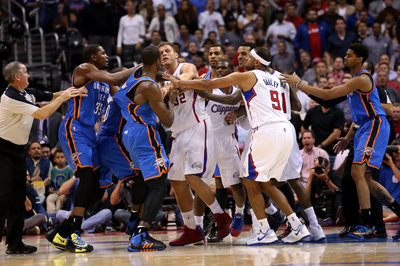 Read the recap from the game

It's not to be condoned, but in the end, the play that got Barnes ejected and riled up enough to send an incredibly ill-advised tweet was almost certainly the turning point of the game. Jalen Rose wanted to make a big deal about the fact that Ibaka was 6-6 and Barnes was 0-5 at the time -- which I find to be a bit disingenuous, since their first half performance says less about what they would do in the second half than their averages. Barnes is plenty important to the Clippers -- but Ibaka is more important to Thunder, for several reasons, not the least of which in this game is that fact that the Thunder were already missing Kendrick Perkins. Barnes' stupid overreaction cost the Clippers a point at the time, and got him ejected from the game -- but the overreaction by the game officials cost the Thunder Ibaka. And the rest of the Clippers woke up in the second half. They might have awakened even without Barnes tough guy act, but we can't be sure of that.

There's not going to be any lingering locker room issues for the Clippers because of Barnes' tweet -- the rest of the team will certainly rally around their hyper-loyal teammate, and in fact have already started to do so.

Barnes is right about one thing though -- this s*** costs him money. How much, and how many games, remains to be seen.