Clippers-Nets: The Questionable Blogger with Dennis Velasco of NetsDaily

Dennis Velasco answers our questions about how long the Nets will continue to spend, why things haven't gone great in Brooklyn this season, and whether Jason Kidd is ready to be a head coach.

In advance of the Los Angeles Clippers showdown with the Brooklyn Nets, I sent some Nets related questions to Dennis Velasco, one of the writers at the fantastic and wildly popular Nets blog, NetsDaily. His helpful and insightful answers are below.

Dennis does a slightly different take, called E-mailing with the Enemy, with a little back and forth, over there as well. Be sure to check out our email exchange over on NetsDaily in advance of the game.

Steve Perrin: The numbers start to make my head hurt at some point, but last I heard, in a league with a salary "cap" of about $58M, the Nets have a team payroll over $100M and will be looking at a luxury tax bill of over $80M at season's end given all the new penalties going into effect. The Buss family (Southern Callifornia real estate money), James Dolan (cable money) and Mark Cuban (dotcom money) scoffed at the dollar-for-dollar tax, but the NBA seems to have gotten their attention with the new penalties. Will Mikhail Prokhorov (Russian oligarch money) ever care about a luxury tax bill?

Dennis Velasco: Definitely. Sure, he's going all out right now, but he didn't become one of the world's richest men by being stupid. There's a certain momentum in marketing, visibility and brand building that Prokhorov is willing to invest in at this point in time. Last year, it was all about Brooklyn, a new home in one of the more recognized cities around the world known for its diversity, hipsters, Dem Bums and, of course, birthplace of two of the top artists/icons in hip-hop - Biggie and Jay-Z, a former owner of the team. Now that the opportunity of a new location, new building and new black and white branded colors has faded a bit, it's time to move past the facade and go deeper into the heart of it. And, what's at the heart of it, of owning a team, of playing for a team, of being a part of it? Winning. For now, there's no price too big for Prokhorov to get into the heart of why he's here.

SP: Sorry to harp on the money thing, but hop on the 2 train and head to Madison Square Garden (you'll also need a time machine to go back a few years) to see what happens when teams just spend, but don't also think. Are Nets fans concerned about that mentality?

DV: I wouldn't say the Nets aren't thinking in regards to the players they're spending money on. Not at all. Prokhorov isn't James Dolan, who entrusted his teams to idiots that would have burned down the Garden (Isiah Thomas) without divine intervention OR competent people that challenged his authority to whatever degree, but still had the team succeeding (most recently Donnie Walsh and Glen Grunwald) that he eventually fired. Prokhorov is mainly a hands-off owner that doesn't get deep into any personnel decisions.

And, it's easy to get past the money because there's so much of it, but if you sit and think about it, the money was thought to be well-spent by many people. Well, relatively well-spent if you could forgive the luxury tax payment that would be due. But, hey, if Prokhorov could do it, we should too. But, seriously, the team is so far away from matching expectations, but before the season started, everyone praised the Kevin Garnett, Paul Pierce, Jason Terry and, especially, Andrei Kirilenko acquisitions. However, it's just not panning out now and it's easy to pile on while the team is down. But, let's remember, chemistry takes some time to build and AK47 hasn't been nearly as healthy as the Nets need him to be. Where I think I'm concerned most is how well Jason Kidd will do as a head coach.

SP: In his Hook Thursday morning after the debacle in Sacramento, Tom Ziller described the Nets as "a team of stars masquerading as role players." Do you agree? Would a more definitive pecking order help get the team out of their funk? How would Paul Pierce and Kevin Garnett respond if they were asked to accept diminished roles? 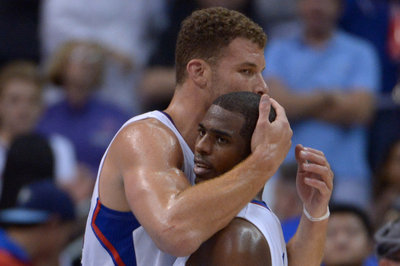 Be sure to check out my conversation with Dennis on NetsDaily

DV: At this time, it's about producing. The ones that will lead the team out of its current funk will be the ones that put up the numbers to contribute to the Ws. That isn't Kevin Garnett, who's been absolutely horrible with his jumper, his defense and overall play. Sure, he can jaw and all of the other types of histrionics he'd like to engage in, but the fact is that he's doing nothing. Other than this sense of him being a legendary presence, Garnett is only a role player at this point. Pierce has been okay, but his production has been lacking, not meeting expectations. Die-hard Nets fans still have faith in him, however. And, I think both Pierce and Garnett would be fine if they have diminished roles in the regular season and in the first three quarters. Postseason and end of the game? Different story.

Deron Williams hasn't been totally healthy this short season, so we can understand why he's been less than a star. Joe Johnson looks like he's playing as he did last year when he first joined the team - trying to figure out his role. Although, as he did last season, Johnson is hitting clutch shots again, recently tying the Phoenix Suns game in regulation to send into overtime, where he hit the game-winning shot. However, the only real player that has consistently produced and at a relatively high level is Brook Lopez. At this point in his career, he's not a natural leader, at least vocally. Lead by example? Bropez definitely has the ability to do that. However, he needs the ball, as he was getting it last night, scoring 25 points in the second half and OT.

I don't think there needs to be a pecking order per se, but time. Time to get healthy and time to build that ubiquitous, but all important chemistry.

SP: Jason Kidd went directly from the court to the sideline, taking over as the Nets head coach immediately upon retiring from the game. He's a smart guy, a great basketball player and a Nets legend -- but is he an NBA head coach? Do you think the fact that he was a peer of these guys (for over a decade for about half the team) hinders him in trying to coach them?

DV: Well, Kidd is an NBA head coach, but is he a good one? Honestly, I've been of the mind that he's lucky as hell to have Lawrence Frank and John Welch as his top assistant coaches to help cover up and build on obvious weaknesses. I'd be very surprised if he turned out to be a great head coach all by himself, but very much less surprised if he was part of a collective of great coaches. Also, it's still very early to say if he's good or not. The Nets are 3-5 now, so when you go by that small sample size, Kidd is horrible. But, there are 74 more games in the regular season. And, if the basketball gods should show favor toward the Nets, there will be even more games in order to judge the ability of Kidd as a head coach.

The question of whether or not his team could basically see him as a coach since Kidd played against most of them for a significant number of years always comes up for some reason. I mean, I get it, but I don't think it really matters with a basketball guy like Kidd. He has won the Olympics gold medal, he has an NBA title, he's regarded as one of the best point guards to ever play this game... respect almost automatically goes to him when it comes to basketball. He may need some time to find that different type of motivation from a coach's perspective as opposed to a player's, but I believe he'll eventually get there. That's the optimist in me anyway.

SP: We're in week 3 of the season, and obviously it hasn't begun well for the six-all-star Nets. But it's going to be OK, right? RIGHT?

DV: YES! As long as they can get and stay healthy, which is key for every team, but for any real shot to win a chip and have the Larry O'Brien Trophy being raised in Brooklyn, everyone, particularly the NBA All-Stars need to stay healthy. Will it happen? I'm crossing my toes, legs and arms as I write this. Just in case, I'll cross my fingers nowjgesujlkstuhg;ejrgn;ka

Thanks very much to Dennis. I totally agree that the Nets off-season moves all seemed to make sense from a basketball perspective, at least in the short term. So if money is no object, then why wouldn't you take Pierce and Garnett over Wallace and Humphries? Which is why it's so surprising that the short term has been so problematic.

I'm sure the Nets will turn it around -- some time after this game against the Clippers, that is.

Clippers-Nets game coverage: KG and the Truth come to town