Kobe Bryant's contract extension -- a great deal for the Lakers

Kobe Bryant's two year, $48M contract extension dooms the team to mediocrity from a competitive standpoint for the next two seasons, but that doesn't mean that it's a bad deal for the Lakers.

Share All sharing options for: Kobe Bryant's contract extension -- a great deal for the Lakers

As you no doubt know already, the other Los Angeles NBA team gave a contract extension to a certain Kobe Bryant yesterday; an extension worth over $48M that will ensure that Bryant remains the highest paid NBA player (if only the third best NBA player in LA) for two more seasons after this one. And it was absolutely the correct decision.

Kobe's saying "I'm willing to make less than me, but not less than anybody else"

Look, it's obviously a terrible contract on its own merits. Kobe is 35 years old and has yet to return from a ruptured Achilles tendon -- an injury that almost always exacts a severe toll on performance. To pay $25M to a post injury 37 year old is crazy -- certainly no one else was going to offer him that, so the Lakers didn't have to. Yes, it's a pay cut from his current $30M salary; but that's what aging superstars do -- they take pay cuts. Usually pay cuts that don't leave them as the highest paid player in the league. Kobe's position on this contract seems to have been "I'm willing to make less than me, but not less than anybody else."

Contrast Kobe's extension with Tim Duncan's last contract. In July 2012, Duncan re-signed with the Spurs, the only team he's ever known, for three years and $30M, at the age of 36. Bryant's deal, worth $48M for two seasons, will also take effect when he is 36. Duncan has four rings and two league MVP awards. Bryant has five rings and one MVP award. What's the difference? About $14M per year, and a whole lot of ego.

In ESPN's Daily Dime, to the question "What matters most to Kobe?", Chris Broussard answered "Definitely winning titles" while Ramona Shelburne said "He'd do anything to chase [a sixth ring]." But let's face it, those statements are demonstrably false. Accepting a Duncanian contract would have literally freed up enough additional money for the Lakers to make a max offer to a restricted free agent like Eric Bledsoe, in addition to the max contract slot they are targeting towards Carmelo Anthony (or whomever) this summer. Given that an additional great player on the roster would clearly be very useful in this theoretical ring pursuit, we know for certain that something is more important to Kobe.

But as I said, I have no problem with this signing from the Lakers' standpoint. If the Lakers were going to be strictly business about this whole thing, they would have amnestied the injured Kobe over the summer, saving themselves millions in current and future (because of the repeater tax) luxury tax payments and truly setting themselves up to pursue free agents with a clean slate next summer. They didn't even consider that because of the importance of Kobe to the franchise and the fan base.

The obligation of the Lakers owners is to fill seats, boost TV ratings, maximize revenues

Ask yourself also, what is the obligation of the Lakers ownership group? Is it to win games? Or is it to fill seats, boost TV ratings, maximize revenues? The Lakers new cable deal, which just kicked in last season, is for 20 years and something north of $3 Billion (with a B) -- it may be worth as much as $5B. Obviously Kobe Bryant's 15 seasons prior to that deal were a major factor in the Lakers being able to command so high a price tag. And millions upon millions of Kobe's fans will continue to pack STAPLES Center and tune into Time Warner Sports to watch him play in his final seasons. The Lakers owed him that money so it was the right thing to do from that perspective, and it will be a good decision for the team's bottom line as well.

Don't forget, Kobe currently sits fourth on the all time NBA scoring list. While this deal does nothing to help Kobe catch Michael Jordan's six rings, it basically guarantees that he'll pass Michael for third on the scoring list -- and he'll do that with a single team, which Michael did not do. Of course, the extension was probably irrelevant in the Jordan pursuit, since he'll almost certainly catch MJ this season -- he's 675 points back right now, so assuming he can play even half the games, it's in the bag -- but you can only imagine how big a deal it's going to be.

With Kobe signed until 2016, where do the Lakers go from here? 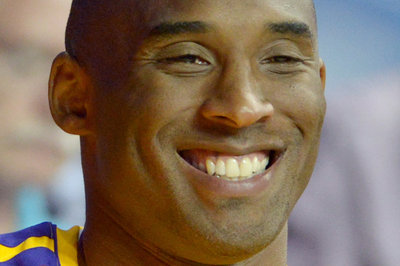 Once he passes MJ, we'll all be on Karl Malone watch. Kobe is currently 5,311 points behind the Mailman for the second spot on the all time list -- achievable if he can average 25 points per game and play in 220 or so games over the remainder of this season and in the two years of his extension. And there will be countless other lesser milestones along the way -- he's currently 4,757 points behind Malone for the record of most points scored for a single franchise, which will be a VERY big deal. In short, the Lakers have no chance of being a contender until this gargantuan contract is off their books, but they're also guaranteed to be a gargantuan story as long as Kobe plays for them.

Can Bryant actually catch former Laker Kareem Abdul Jabbar for the top spot on the all time scoring list? He'd have to play in 220 games while averaging close to 31 points to do so by the end of this extension -- but if he's getting close and still able to play at all, you can bet he'll sign a one year deal at age 38 to continue the pursuit. A part of me even thinks that we could see a version of 2006 Kobe, jacking 25 or more shots a night and scoring over 30 a game, chasing that record before the end of this extension, putting up terrible efficiency numbers on a terrible team, and loving every minute of it

Whether this contract helps the Lakers compete for a title isn't really the question -- it clearly doesn't. Of course, Kobe could have had both, pursued the individual records AND helped the Lakers build their team, by taking less money. But he didn't want to do that, and the Lakers would have been wrong to play hard ball with him. Wrong because of what he's meant to the franchise, and wrong from the standpoint of their business. The Kobe Bryant farewell tour is going to be a massive draw for as long as he can play, and the Lakers will reap the rewards -- everywhere but the win column.