Clippers-Pacers: The Questionable Blogger with Tom Lewis of Indy Cornrows

In advance of the showdown between the Clippers and the Indiana Pacers, owners of the league's best record, I shot some questions over to Tom Lewis of the Indy Cornrows blog, and he shot back some answers.

We don't see a lot of the Pacers out here on the left coast, so I turned to Tom Lewis, editor of the outstanding SB Nation Pacers blog Indy Cornrows, to provide some insights into this burgeoning NBA power. Be sure also to head over to IC to check out my answers to Tom's Clipper questions.

Steve Perrin: Well, life is pretty good at the Pacers place. Given that I'm having trouble thinking of questions to ask, it occurs to me that maybe bad teams are more interesting... How does it feel to be blogging about the team with the best record in the NBA?

Tom Lewis: It has been fantastic, plain and simple, made even better by the way this team operates. From the coach to all of the players, they are tied together and handle their business like pros. They are great with the media, take time to offer thoughtful answers to questions and appear to appreciate their rise in the pecking order of the NBA. I too, appreciate the team's current status. The night I launched my blog back in October 2006, Stephen Jackson and Jamaal Tinsley were getting into a fracas at Club Rio that ended with Jack firing his gun and getting flipped over a moving car. It has been a tough slog from that night to where the team is now, but it does feel like things have turned suddenly. The crazy part is that the Pacers have some great young talent and have plenty of room to improve, but they are all in for this season since nothing in the future is guaranteed with the new CBA rules.

SP: I didn't have much problem with Blake Griffin's NBARank of 14 on ESPN.com during the off-season. I did however, at the time, think that having Paul George ahead of him at 13 seemed a bit pre-mature for a guy who had a PER below 17 last season. Turns out maybe those guys knew something, because George is at another level this year. What is the difference in this guy this year? I mean, he's scoring almost seven more points per 36 minutes -- that just doesn't happen.

TL: To his credit, Paul George has had this vision for his game since he was drafted and simply put in the work to make it happen. I rolled my eyes along with others when as a rookie, PG confidently stated his intention to be among the elite players in the league. He has always had a confidence that is hard to describe. There is nothing cocky about the way he talks, but he absolutely believes in his ability to be great and has always backed up his words with actions that deliver an amazing end result.

Considering he's only 23, the best is yet to come for PG, but his jump in scoring this year goes back two summers when he focused on ball handling with NYC ball handling guru Jerry Powell. He didn't fully turn the corner last season, but after continuing his work with Powell this past summer, George has far better control and the ability to create space for himself to rise up and knock down shots. He also tweaked his shot a touch and just went to work to improve his stroke. So the combined effort to have a reliable handle in traffic with more confidence in his shot has made all of the difference. Even so, the additional jump he's taken in scoring this year is remarkable and given the Pacers a go-to option down the stretch.

SP: The Clippers went on a 17 game winning streak last season, which included a perfect month of December. But we knew at the time that an unusually soft schedule had a lot to do with that streak, and when things balanced out as they always do and wins became tougher to come by, things got a little tense around the team. In retrospect, I wonder if it would not have been better to spread those December wins out a little more. Do you worry that the soft opening schedule for the Pacers might introduce a little overconfidence that could present a problem later on?

TL: The soft schedule has changed the way I look at games and is actually something I picked up from hearing Luis Scola and David West discuss the team's results. They know if the team played well or not, regardless of the opponent or end result. So I like to judge the team by whether they played like contenders, pretenders or champs. For the most part, they've played like contenders, with strong stretches of playing like champs to bury teams in the second half of games.

Pacers vs. Clippers: Q & A with Clips Nation 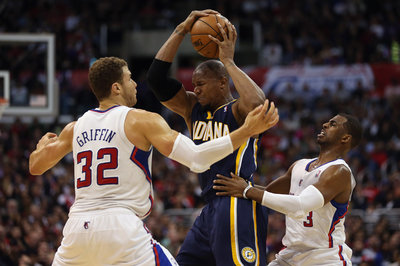 This five-game road trip combined with the next five games that includes two matchups with Miami will be the Pacers toughest 10-game stretch of the season. Seems crazy that after a soft start, they will be done with the toughest part of the schedule in mid-December, but that's life in the East right now. Fortunately,overconfidence is not an issue with this crew. They have such strong veteran leadership and were, to a man, so frustrated with how the season ended in Game 7 of the Eastern Conference finals last year, that they take nothing for granted and feel every game, practice or private workout is a chance to improve their chances to get to the Finals this year. That type of drive will be tough to maintain through the marathon season, but the only concern for this team is injury, not overconfidence.

SP: Three or four years ago, Danny Granger was an all star and the face of the Pacers franchise. But he played a total of five games last season -- the best in a decade for the franchise -- and hasn't played this season. So where does that leave Granger? Can he be a valuable reserve when healthy? Or is he just an expiring deal at this point?

TL: Granger can be a much-needed extra weapon off the bench for the Pacers. The team is obviously in no hurry to have him return at this point in the season and if he is able to return at some point he will be role player. It is crazy to think that the Pacers are doing so well with $14 million of their salary cap giving them nothing. But the Pacers are fortunate to have Paul George and Lance Stephenson playing for a little over $4 million COMBINED this year. So yeah, the Pacers will need that expiring contract of Granger's to help pay PG next year, but for this year, Granger knows the score and where he is at in his career. He remains involved with the team on a day-to-day basis and hopes to be able to contribute in some way. As the Pacers found out in the playoffs last year, you can't have enough options off the bench and even if the production isn't consistent, having Danny Granger to turn to at a critical time may earn the Pacers a key win or two in the playoffs they wouldn't otherwise win, the type of impact they saw Miami get from Mike Miller and Ray Allen in the playoffs last year.

SP: Speaking of Granger's expiring deal, things obviously look great right now, but every team has weaknesses. That Granger deal is an interesting trade chip -- if the right deal were available, what would you want to add to increase the team's chances at a title? I'm not looking for a name, but what skillset do you think the team needs to add?

TL: For the reasons I mentioned above, I don't think the Pacers will be able to find a suitable deal were they inclined to move Granger. The parameters would have to include a player that also has an expiring deal who can bring a lot of what Granger does, although actually play. The Pacers playing rotation includes either rookie Solomon Hill or second-year player Orlando Johnson on the wing and neither have been real consistent. So a reliable wing player who can defend and knock down open shots would help tighten up the Pacers playing rotation for the playoffs. A player like Arron Afflalo is what I'm talking about, although in Afflalo's particular case, there would need to be more moving parts and the Pacers would essentially have to give up their hopes to re-sign Lance Stephenson. Doing so by the trade deadline would completely disrupt the chemistry this team has and threaten to blow up everything the Pacers are working toward this year. Again, considering the Pacers are "all in" for this season, something would have to change between now and the deadline to consider such a move plausible.

Thanks so much to Tom for these great answers. You know, every time we do these Q&As, I always thank our guest and say how great the answers were, but usually I'm just being polite. This time I really mean it. Those other guys are all pikers, but Tom is the real deal.

Remember to head over to Indy Cornrows to check out my answers to his questions.