Nothing is coming easy at present for the Clippers, but 61 points from Chris Paul, Blake Griffin and Jamal Crawford carried the team to a victory against Coach Doc Rivers' former team.

The NBA season is long. At some point later this season, basketball will be fun again for the Los Angeles Clippers. Their shots will be falling, the offense will be flowing, the team will be healthy, and when that future day arrives, it will be difficult to remember or indeed even imagine how difficult things are for the team right now. How pulling-teeth, stop-and-start, no-alibi-U-G-L-Y it is just to score points.

It's going to happen. I have gone into every game of this road trip assuming that the floodgates would open. But it hasn't happened yet. Again in Boston against the Celtics, it was a struggle. Just take a look at the first quarter shot chart for the two teams. 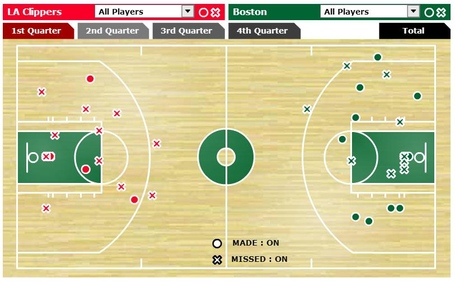 Boston made nine jump shots in the first quarter -- out of 13 shots from beyond 10 feet. The Clippers on the other hand were 2-11 from beyond 10 feet. This was of course not an isolated quarter, but the continuation of a trend that goes back to the Indiana game at least. Is Boston a good jump shooting team? Yes, they are, it's a strength of the Celtics. But guess what? It was supposed to be a strength of the Clippers this season as well. The off-season priority was to add shooters, but you certainly wouldn't be able to guess that based on the recent results. The loss of J.J. Redick definitely hurts the team shooting, but the current struggles go way beyond the absence of one guy.

Things settled down after that first quarter -- a quarter the Clippers only trailed by three points, despite the shooting disparity. The Celtics actually built a six point lead by halftime, but a 14-4 Clippers run to open the second half put the Clippers on top. Boston regained the lead for a time, but the Clippers were up by a basket going into the fourth quarter, and never trailed again.

Get the view from Boston

Get the view from Boston

Still, the Clippers refused to make things easy on themselves. They missed 12 free throws in the game -- yes, five of them by DeAndre Jordan, but a pair each from Paul and Darren Collison and Antawn Jamison as well, including four straight misses in the middle of the fourth quarter when they should have been putting the game away.

Poor three point shooting has been the biggest bugaboo for the team lately, as they've been below 20% on the trip outside of a red-hot second half in Memphis. Heading into the fourth quarter in Boston, they were once again frigid from deep -- 3-12. But as if to highlight just how important the three ball is as a weapon, after the Celtics got back to within two points for the final time, Jamal Crawford hit threes on back to back possessions to finally put the game to bed with a little over two minutes left.

Crawford finished with 21 points, second on the team behind Paul's 22 (he also led the team with nine assist and tied for team high with seven rebounds), while Blake Griffin contributed 18 points, seven rebounds and four assists.

With Kris Humphries and Kelly Olynyk hurt (not to mention Rajon Rondo of course) an already thin Celtics bench became threadbare, and Boston's starters accounted for 84 of the team's 88 points. Funnily enough, although the Celtics are small across the front line, they're actually very big at the small forward, where Jeff Green is as tall as either of their actual bigs and probably longer. That size at the small forward created a mismatch against Jared Dudley (and a huge mismatch during the brief periods where he was matched up with Jamal) and Green led all scorers with 29 points. But with Griffin getting up on Brandon Bass after the intermission, Green was pretty much the only option the Celtics had in the second half, and that just wasn't enough.

Stephen Jackson had an interesting debut in his first game as a Clipper. He didn't score, didn't get a rebound, an assist or a steal, and he missed all three of his shots (all of them three pointers). He did however pressure the Celtics into a couple of mistakes with his defense, and appears to be just an intense as ever, which will be a welcome addition to the team. His shot selection was as bad as ever -- you might think that a guy who hasn't played an NBA game in eight months and who has just joined a team on a non-guaranteed contract after being ignored by the entire league all off-season would think twice before launching a three pointer early in the shot clock the first time he touched the ball. But then I guess he wouldn't be Stephen Jackson.

Rivers seemed to think that he needed Griffin on the court to match up with the jump shooting bigs of the Celtics, and Blake logged 42 minutes on the night. No one else played more than Dudley's 37, so hopefully they won't be too fatigued for their meeting with the Nets tomorrow night.

Fatigue notwithstanding, you can assume that the game in Brooklyn will be a struggle, unless and until the shots start falling again.