Lunch is done. Game is not on for another 6 hours. Enjoy some Clippers/NBA web findings in today’s DC!

Share All sharing options for: the Daily Clipper – Mid-Day edition

It took me all morning to get over last night’s debacle, so you are getting a late edition of today’s DC. Only one thing can take my mind off this "slump" the team is experiencing: 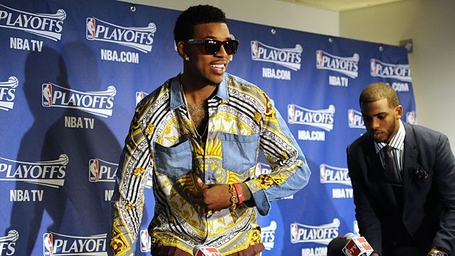 Clippers' depth at point guard tested | Sports - The Orange County Register
Eric Bledsoe is healthy enough to laugh with his teammates at the end of a shootaround. He's healthy enough to sit in the locker room pregame and watch film on his iPad.

Clippers' small forward Matt Barnes showing his versatility - Los Angeles Times
It can be argued that Matt Barnes is playing the best of his 10-year career. At least that what the numbers say. Barnes is averaging a career-high 10.7 points. His 36.2% three-point shooting is

Do You Still Believe In Thunder, Clippers? " NBA.com | Hang Time Blog
I'm even more concerned about the Clippers, my one and only guilty pleasure in the league (I watch them religiously, against the best of the best and the lowest of the low because I’m afraid I’ll miss something like this, this or this).

Chris Paul flops, is in so much imaginary peril - SBNation.com

The anguish on Chris Paul's face is just heartstopping ... until you realize he is trying to pull off an unbelievable flop.

Kings Blog and Q&A: The Morning After: Is DeMarcus Cousins vs. Grant Napear no big deal?

UNLIKE THE TEAMS in the NCAA Tournament, it could be none and done for Andrew Bynum as a 76er. The Sixers announced at halftime of Monday night's game against the Portland Trail Blazers that the 7-foot, 300-pound Bynum will have surgery on Tuesday, thus ending one of the most frustrating situations in team history.

Sixers on the Road Again

Lil Wayne got a visit from Chris Paul during his recent stay in L.A. hospital | Ball Don't Lie - Yahoo! Sports

From the blog Ball Don't Lie: SACRAMENTO, Calif. – Before he was released from Los Angeles' Cedars-Sinai Hospital in Los Angeles, Lil Wayne got a visit from an NBA player who regards the rap star as a "big brother." "I just went to make sure my … Continue reading →