The Clippers need to play better perimeter defense, but sometimes shots go in regardless of the defense. There's an element of randomness in the game, though no one likes to admit it.

Share All sharing options for: Three point shooting and randomness

The Los Angeles Clippers have lost 20 games this season. Of those 20 losses, 12 of them have a very distinctive signature. When the Clippers give up more than 11 three pointers while allowing their opponent to make at least 40% from beyond the arc, things do not turn out well for our favorite team. Wednesday's win over Milwaukee was the first time this season that the Clippers have managed to win in such a game; Thursday night in Denver was their 12th such loss. They are 1-12 in games in which they allow 11 threes and 40% three point shooting -- they are 43-8 when they don't.

It's certainly true that the Clippers have shot themselves in the foot in a few of these losses. There have been games where the team has lacked energy in general, and part of that lethargy manifests itself in the form of missed rotations and slow closeouts of three point shooters. Against great shooting teams like Golden State and Oklahoma City and Miami, that's going to result in a barrage of three pointers.

But strangely, in addition to losses against teams that shoot well from deep, among the dozen defeats on the list are several teams among the worst in the NBA from beyond the arc. The Clippers have been lit up from the perimeter this season by Orlando, Portland, Denver, Boston and Toronto -- all in the bottom 10 in the NBA in three point shooting percentage.

Coaches, players and fans tend to think that everything that happens in a sporting event is cause and effect; that if they do things (to use Vinny Del Negro's favorite cliché) "the right way" then they'll control their destiny and win games. But what they don't like to admit is that there is a pretty big random element in every individual game. I'm not suggesting that games are determined by blind luck -- after all, the teams we think are going to win before the season begins almost always wind up at the top of the league, so clearly the outcome of an NBA game is more than just a coin toss. But there's some amount of randomness built in, particularly as regards shooting.

And some of the games in which the Clippers have been torched from the three point arc were just that -- just bad luck in which the team ran into an opponent that randomly made an uncharacteristic number of threes.

Take Thursday night's loss to Denver for instance. The Nuggets lead the league in fastbreak points and in points in the paint but are 25th in three point percentage. Against such a team, the game plan out to be to wall off the paint and to limit fastbreak opportunities. It would be great to have a defense capable of taking every shot away from every opponent, but in reality you have to give up something. Against the Nuggets, you give up shots from the perimeter.

In a game earlier this season in Portland, the Nuggets were 0-22 from the three point arc and failed to make a single perimeter shot until a Ty Lawson hit a meaningless 20 footer with 38 seconds remaining. Against the Clippers Thursday night, the Nuggets made 11-23 from three point range, including 6-7 during the all important third quarter in which the Nuggets turned a tie game into a double digit lead. Does perimeter defense explain the discrepancy? Maybe some of it, but certainly not all of it. Ty Lawson is a terror penetrating to the basket but a mediocre perimeter shooter. When he pulls up to take a three pointer with 20 seconds remaining in the shot clock as he did early in the third quarter Thursday night, you'd be foolish to be close enough to him to contest that shot. If he makes it, he makes it. Thursday night, he made it.

It sounds like an excuse to blame it all on random bad luck, doesn't it? Challenge those three point shots, pressure those shooters, and they'll miss more, you say. There are no accidents. But if you don't believe me that there's a random element involved here, look no further than opponent free throw percentages. The spread of opponent free throw percentages looks suspiciously similar to the spread of opponent three point percentages.

League-wide, teams shoot .359 from three point range. The worst three point defense in the league belongs to Phoenix, who allows teams to make .389 from deep. The best belongs to Indiana, which limits teams to .320.

From the free throw line it breaks down as follows: the league shoots .753 from the line. But for some reason, opponents shoot .790 against the Kings, while Boston "holds" their opponents to .726 from the line.

People tend to not understand randomness particularly well. When Apple first introduced the iPod, customers lodged myriad complaints about the "shuffle" feature which was designed to play songs at random. Of course, truly selecting a song at random meant that sometimes the same song would be repeated -- in a completely random universe the same song might be repeated two or three or four times . After being deluged with complaints, Apple changed the shuffle feature: in the words of CEO Steve Jobs, they made it "less random in order to seem more random." Random events are mistaken for patterns all the time.

I'm not suggesting that there's no correlation between perimeter defense and opponent three point shooting. While I don't think anyone could make a convincing argument that Boston's free throw defense is better than Sacramento's, the same is not true when looking at Indiana and Phoenix and perimeter defense. Indiana has very long, very quick defenders on the perimeter and have the best overall defense in the league -- Phoenix, not so much. It seems right that Indiana has the best three point defense and Phoenix the worst. It doesn't seem random -- there's some signal in there, it's not just noise. 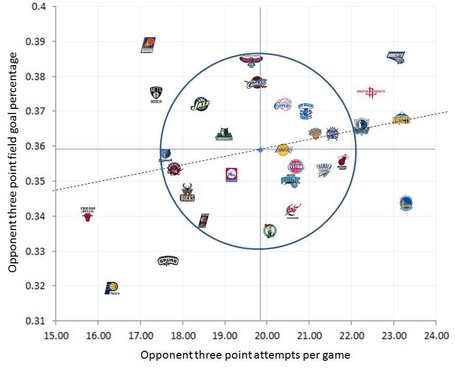 The image above (which you can click to enlarge) shows every NBA team placed on a graph where the x-coordinate is the number of opponent three point attempts per game and the y-coordinate is the opponent three point percentage. The axis represents the league average for each -- 19.84 attempts and .359 shooting. Note that I did not control for pace in this exercise, so teams like the Rockets and Nuggets may read a tad too high on attempts, but I don't feel the numbers are skewed too badly.

Based on our assumption that good perimeter defenses limit three point attempts and allow a poor percentage while poor perimeter defenses do the opposite, we'd expect to see the best defenses clustered in the lower left quadrant and the worst defenses clustered in the upper right quadrant. And indeed, the Pacers, Bulls and Spurs all come out as above average on both measures, while the Bobcats, Rockets and Nuggets all come out below average on both.

Furthermore, when we plot the trend line looking for a correlation between these numbers, our suspicions are indeed confirmed. The dashed line that slopes slightly upward from the lower left to the upper right tells us that these numbers do correlate as we thought they might. Teams that allow the fewest three point attempts tend to allow a lower percentage.

But what about the Suns? And what about the Warriors? What are they doing way out there in no man's land where we don't expect to see any teams? The Suns allow the highest three point shooting percentage in the league, yet allow the third fewest three point attempts per game. Is there any way to explain that other than random statistical noise? Perhaps -- PERHAPS -- the Suns interior defense is so porous that teams rarely feel the need to shoot three pointers, but that's a stretch. It's even harder to explain away the Warriors' placement. They allow the most three point attempts in the league -- but their opponents shoot well below the league average on those attempts. Why do teams feel so compelled to shoot threes against the Warriors while connecting at a much lower rate than the league average? The obvious answer -- the Warriors have gotten lucky and teams have missed a lot of three pointers against them.

When we look at three point defense in this manner, the Clippers do indeed find themselves in the dreaded upper right quadrant reserved for poor perimeter defenses. We also find fully two-thirds of the league -- 20 teams -- clustered around the league average inside the circle. Note that there's nothing magical about the circle -- I didn't calculate the standard deviation or anything, I just drew a circle around what seemed to be a clean break in the data. But visually it's evident that most teams find themselves near those means. The Pacers are uncommonly good; the Bobcats are uncommonly bad; the Suns and Warriors are statistical outliers. And most of the rest of the league is pretty unremarkable.

In the end it's not surprising that the Clippers are a bit worse than average at defending the three point line. By overall defensive efficiency, the Clippers are very good, seventh best in the league at present. But they are best at defending the interior (top ten in opponent field goal percentage) and at forcing turnovers (best in the league in steals and turnover percentage). Assuming that you can't defend everything perfectly, teams have to give up something defensively. When Chris Paul or Eric Bledsoe gambles for a steal in the passing lanes, it leaves a man open on the perimeter. It's the way this Clipper defense is built -- they will give up some threes.

The Clippers should certainly strive to improve their perimeter defense. The fact that they allow more three point attempts than the league average and allow a higher percentage than the league average tells us that they are almost certainly sub-par at perimeter defense and it's not simply bad luck. BUT when Dion Waiters makes 7-11 or the Nuggets make 6-7 in a single quarter, those are random events that have little or nothing to do with defensive breakdowns.

Oh, and for what it's worth, the Clippers are slightly above average in free throw defense, so they've got that going for them.