Share All sharing options for: Chris Paul and LA's Best

In 1988, the late Tom Bradley (1917-1998), Mayor of Los Angeles at the time, created, in partnership with LAUSD, an after-school program to provide adequate adult supervision of children during the critical hours between 3 p.m. and 6 p.m. This program became known as LA's Best (Better Educated Students for Tomorrow). Twenty-five years later LA's Best now serves 28,000 children in 180 schools in the City of Los Angeles.

When our own Chris Paul was traded to the Clippers, he and his CP3 Foundation immediately became involved with LA's Best by personally participating, sponsoring and hosting various events benefiting Los Angeles kids.

Here are a couple of events in which CP3 has participated: 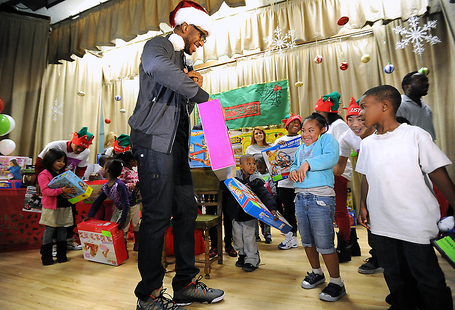 Now, on June 22, 2013, CP3 will be hosting a fundraiser for LA's Best at the Beverly Hills Hilton. This event is expected to raise over $1 million for the program.

CP3's community involvement did not stop when he left New Orleans: It was transplanted to the City of Angels where it is well and alive.

We should be proud of our CP3 and also how he has raised the profile of Los Angeles Clippers.