The Grizzlies have won two straight to tie their NBA Playoff series with the Clippers at two games apiece. The series now becomes a best two of three, and Game 5 in Los Angeles on Tuesday will be huge.

The Memphis Grizzlies are a tremendous defensive basketball team, there's really no denying that. But the question of whether they can contend for a championship really hinges on their offense. Ranked 17th in offensive efficiency during the regular season, they were the only Western Conference playoff team below the league average.

So when they can shoot over 50% from the field and hit a slew of jump shots as they did in their win over the Los Angeles Clippers on Saturday, they're basically impossible to beat. If they can shoot like this throughout the playoffs, maybe they really are championship material. Luckily for the Clippers, they probably can't, but if they do, the Clippers are in big, big trouble. 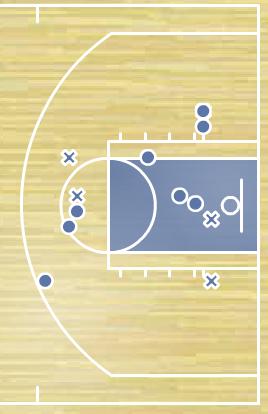 Gasol finished with 24 points on 9-14 shooting. He made six out of nine face up jumpers (or in his case, face up tippy-toe-ers). Clearly Gasol is capable of making those shots -- but he's a seven-footer who shot under 50 percent from the field on the season, so I think it's safe to say that he's not always so automatic.

Looking at that shot chart you can see the precise moment when Game 4 turned. Eight minutes into the second half the Clippers led by two, 6-58. With 0.6 seconds on the shots clock after back to back blocked shots by the Clippers, the Grizzlies inbounded to Gasol near the three point and he launched a 23 footer with a foot on the three point line. That basket tied the game and launched a 9-2 Memphis run. The Grizzlies never trailed again, and expanded the run to 32-12 as they blew the Clippers out in the fourth quarter. In fact, Memphis put up huge numbers to start and finish the game, scoring 33 in both the first quarter and the fourth quarter.

Memphis would have won this game even without transforming into an offensive juggernaut Saturday. In fact, there's a pretty straightforward way to know who is going to win any single game in this series -- just look at which team is winning the rebounding battle. The Clippers outrebounded the Grizzlies in Games 1 and 2 and took a 2-0 lead in the series. The Grizzlies had more rebounds in Game 3 on their way to a victory, and dominated the boards in Game 4 -- to the tune of 45-28. If the Clippers want to regain control of this series, they know where to start.

While the Grizzlies were making their perimeter shots, the Clippers were missing theirs -- almost all of them. Chris Paul and Blake Griffin each scored 19 points on 7-13 shooting, but the rest of the team shot just 18-52, less than 35 percent. The starters aside from Paul and Griffin, Chauncey Billups, Caron Butler and DeAndre Jordan, combined for a total -- A TOTAL -- of two points, missing 12 or 13 shots between them. Billups and Butler missed all five of their three pointers, contributing to the team's dreadful 4-21 shooting from beyond the arc. The Clippers are now just 22-78 on three pointers in the series, 28 percent -- they shot 36 percent during the regular season. Take away Lamar Odom's 4-9 from deep, which is completely unexpected, and the three pointer shooters the Clippers usually rely on are just 26 percent. They're going to have to start making some threes if they want to win this series.

Strangely, in the disastrous fourth quarter, the Clippers in one sequence missed three pointers in four consecutive trips. At the time, they were down 13 with seven minutes remaining -- certainly not the time to start panicking. Yet that's exactly what it felt like, as the threes were coming from Eric Bledsoe and Odom, not exactly the players the Clippers typically like to set up from deep.

And so we have ourselves a series again, deadlocked at two games apiece after a week of playoff basketball. In their playoff series last year, the Clippers led 3-1 only to have the Grizzlies win two in a row to tie stave off elimination. This time around they've once again won consecutive games with their backs against the wall. The Grizzlies have the momentum, but the Clippers still have the home court advantage. Prior to the start of this series, it didn't seem as if the home court mattered that much to these two teams -- the Clippers had won, three straight in Memphis, the Grizzlies had won two of their last three in L.A. -- but the home team has won each game of this series.

Game 5 in Los Angeles Tuesday night looms large in this landscape. Can the Grizzlies beat the Clippers three times in a row? If so, they will have a chance to close out the series in Memphis next Friday. If the Clippers can continue to hold home court, then they'll have two chances to close out the series, including a Game 7 in STAPLES if necessary.