Apparently Chris Paul and Dwight Howard want to play together next season -- just not for any team that has any realistic chance of signing both of them.

Share All sharing options for: Howard and Paul: What's the story here?

So the big news today, if you happen to get your sports news from ESPN like oh so many people, is that the two biggest free agents of the summer, Chris Paul of the Los Angeles Clippers and Dwight Howard of the Los Angeles Lakers want to play together next season.

The cover story on ESPN's NBA page has pictures of Howard and Paul side-by-side over the headline "Get It Together? Will this year's marquee free agents team up, too? D12 and CP3 like the idea, according to sources." The sidebar has the teaser headline "Sources: Paul, Howard aim to be teammates." So wow, if you want to believe these sources (which you may not, by the way) then this sounds pretty serious. 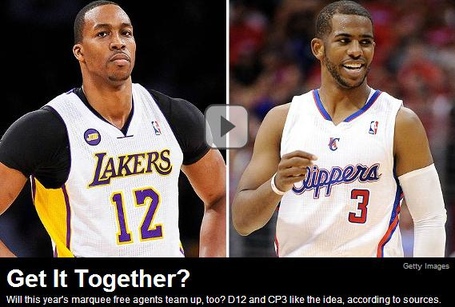 And then you actually read what Chris Broussard wrote on the subject.

It says that Paul and Howard want to play together; but not in Atlanta, which is one of the very, very few teams that could have enough cap space to sign both of them outright. In fact, the actual article goes on to say Paul "is unlikely to leave Los Angeles.... He has gotten over his anger with the club and likes living in Los Angeles." Which, given the size and nature of the headlines when Paul was supposedly mad at the team, one might think that this would have been the headline now that Paul is no longer so upset (or maybe, you don't suppose, Paul was never actually all that upset in the first place?)

If the story, as implied by the headline, is that they want to play together, then Atlanta and maybe Utah would be pretty psyched. But it turns out they want to play together, just not badly enough to do it anywhere it is actually feasible. Which is like me saying I want six pack abs. Sure I want them -- just not badly enough to do what is necessary to get them, like exercising or eating less.

The actual story here, if you read the article, is that Paul is staying with the Clippers -- and he'd be OK with it if Howard were to join him. Which of course is not a story at all.

Will the Clippers give up Blake Griffin and Eric Bledsoe to make this happen, a trade idea floated in Broussard's story? Of course not. Whether Griffin is a more productive player than a healthy Howard is open to debate -- but whether he's more popular is not. Dwight is damaged goods at this point, and there's no way the Clippers are giving up a superstar for him. Would the Lakers take a package that included Bledsoe and DeAndre Jordan if the alternative were losing Howard for nothing? They very well might, but whether they ever get backed that far into a corner is far from certain.