It's June, there's rumors. Let's do some math and see whether or not these rumors (Dwight Howard, Andre Iguodala, etc.) are possible under the NBA's Collective Bargaining Agreement.

Alright, so you've probably heard all the rumors so far- Dwight Howard, Andre Iguodala, Aaron Afflalo, and the entire Celtics roster. So let's look at the financial ramifications of some of these rumored deals, and whether or not they are possible. Then, we'll see how the Clippers can use the CBA to their advantage, twisting these rumors in order to make them compliant with the CBA while still delivering the same or similar results to the Clippers.

First of all, let's look at exactly what the Clippers are dealing as far as salaries and cap holds go. 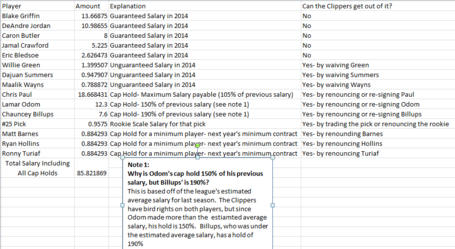 Now, that figure of 85.8 million is startlingly large. Fortunately, it's also not accurate. Lamar Odom and Chauncey Billups right now account for 19.9 million of that, and it's safe to say that once all is said and done the Clippers won't be paying those two a combined 10 million, not to mention 19.9. Now, what these two will really get paid is anyone's guess. They could both get the minimum, or they could both get more. I asked Clips Nation writer Erik O for a little assistance and we agreed that an estimate of 2 million for each is fair. So, let's look at the new picture. 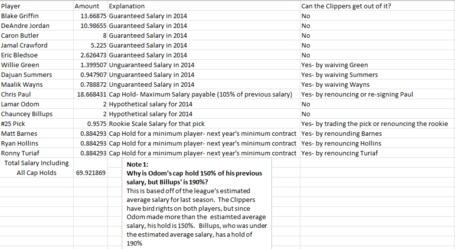 Ok. Look good to everyone? Now, let's look at some different possibilities and how they work under the cap.

This is the new, hot-button topic going around rumor circles right now. A potential S&T that would bring Dwight to the Clippers for DeAndre Jordan and Eric Bledsoe. But as far as I can figure out, the trade can't work. Here's one example of a failed scenario with an explanation. 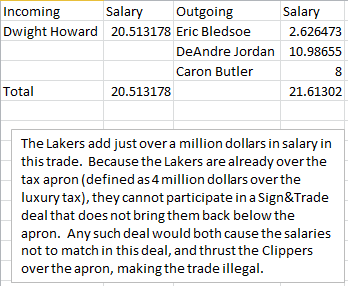 Now, there are other combinations that you could plug in, but I don't think any of them work (Ramona Shelburne agrees). Even Blake Griffin's inclusion in the place of Jordan wouldn't change that, and we already have reason to believe the Clippers won't trade Blake.
So, you ask, is there any other way for the Clippers to get Dwight Howard? Sure. They can just sign him as a free agent. But that, too, will prove difficult. The Clippers would have to clear over 16 million dollars in cap space. First, they'd have to waive all of their unguaranteed contracts and all of their cap holds. 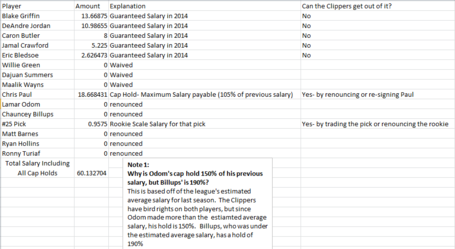 This puts the Clippers at just over 60 million dollars in salary. According to Marc Stein, the cap next year should be about 58.5 million. If the Clippers then traded DeAndre Jordan, Caron Butler, and the #25 pick for "nothing" (future picks that have no cap holds) to teams with the cap space to absorb those contracts, it'd look something like this. 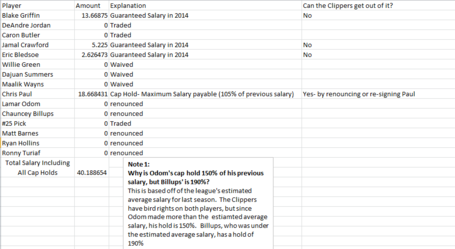 That brings the Clippers' cap figure down to just over 40 million. In addition to this, the Clippers would also have 8 cap holds for their empty roster spots (worth about $490,000 each). Add in those in and the Clippers get up to 44.11 million, leaving them just under 14.4 million dollars in cap space. It's still impossible to give Dwight a max deal without trading either Eric Bledsoe or Jamal Crawford for nothing. But, Erik O and I agree that, for the sake of this exercise, it's not unreasonable to assume that Chris and Dwight would take a discount in their new contracts to be able to play together. Finally, after decimating their roster, the Clippers can have Dwight Howard.
This is costly, however. The Clippers are left with only Chris Paul, Eric Bledsoe, Jamal Crawford, Blake Griffin, and Dwight Howard on the roster. Furthermore, because the Clippers would be below the cap and spending up to it, I believe that they would lose their non-taxpayer mid-level exception (5.15 million a year for four years, with raises). They would then be left only with the room mid-level exception (2.652 million a year for 2 years, with raises) to sign a new player, and no draft picks with which to acquire rookies. That means a lot of minumum deals.
Let's move on.
Since Iggy has announced that he will decline his player option next season, there's been some speculation that the Clippers could/should pursue him. They've been linked in the past, and the destination does make some sense. The easiest thing to do would be just give Andre the full non-taxpayer mid-level exception. But, that probably won't be enough for him. The Clippers could also do something similar to the above scenario with Dwight Howard, but I don't see them blowing up the entire roster for Iguodala.
So what can they do? The most likely scenario here would be a Sign and Trade deal. The Clippers could flip Caron Butler's expiring contract and the #25 pick to Denver for Iguodala. As long as the Clippers stay under the tax line, they can trade much less salary for Iguodala than they get back. If the Clippers trade 9.8 million dollars or less in outgoing salary, they can have an incoming salary of 150% + 100,000 as long as they stay under the cap. If the Clippers trade between 9.8 and 19.6 million dollars in outgoing salary, they can get back the outgoing summer + 5 million in incoming salary. 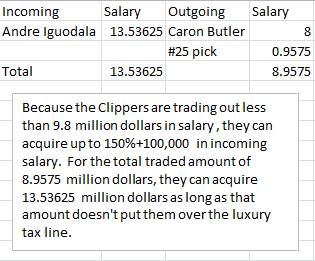 Let's see how this trade would affect the Clippers' overall salary cap. 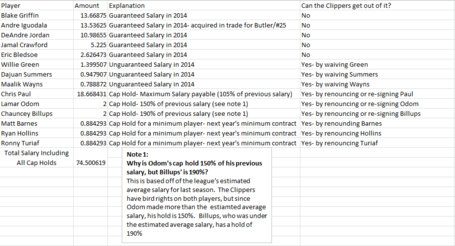 The projected luxury cap is 71.6 million for next season. The Clippers need to the point where they are still under this line after the trade. It's doable.

By waiving Summers and Wayns, and renouncing Barnes, Hollins, and Turiaf, the Clippers lower their payroll to 70.1 million. In this scenario, they have 9 players under contract, leaving them with three roster spot cap holds for 490,000 each. Add those in, and the Clippers sit at a total of 71.58 million, leaving them just under the tax line, making this trade legal.
I know some would be reluctant to renounce Matt Barnes, but it would be worth it to acquire a player like Iguodala. Also, Barnes' rights are worthless- the Clippers wouldn't be able to pay him enough using them anyway. Spending a portion of the Mid-Level on Barnes is still possible post-trade in this scenario.
That seems doable, right? From Denver's perspective, it's better to get Butler and the pick than nothing. Butler is a good shooter with an expiring contract that can be re-traded or let off the books in a year, and the #25 pick is just a project and an asset.
Hopefully this all makes sense to you. Leave any questions or alternate scenarios in the comments