Are the 2014 Cliptics a real possibility?

Could Doc Rivers be coaching Kevin Garnett, Paul Pierce, Chris Paul and Blake Griffin on the Clippers next season? An idea that once seemed unlikely in the extreme is looking more feasible every day.

Share All sharing options for: Are the 2014 Cliptics a real possibility?

Well these Doc Rivers-driven Clippers/Celtics rumors don't seem to be going away, and it's reaching the point where I think something might actually happen here. That which was termed far-fetched by Broderick Turner yesterday seems much nearer-fetched today.

It seems strange to think of the Clippers as the "All-in on a title, mortgage the future" team in a trade scenario -- that's traditionally been the role of the Lakers, or even the Celtics for that matter. But there's an undeniable logic to the broad strokes of a Clippers-Celtics deal.

There's simply not enough talent around the aging Kevin Garnett (37) and Paul Pierce (35) in Beantown for them to compete for a championship at this point which means that a rebuild in a post Pierce-Garnett era is inevitable. Rivers has been there nine seasons and is the most highly paid coach in the NBA at $7M per season -- he doesn't want to preside over a rebuiild, and the Celtics probably would prefer not to spend that kind of coin for a coach who's worried more about player development than playoff wins.

The Clippers on the other hand have two superstars in place, but feel like they need to put some more help around them to succeed in the playoffs. After posting the best record in the NBA over the course of November and December last year, expectations got very high for the team -- losing in the first round of the playoffs, albeit to a very good Memphis team, was a rude awakening.

The broad strokes of the deal are pretty straightforward. Garnett, Pierce and Rivers would leave Boston and reconvene in Playa Vista and some combination of assets that would almost certainly include DeAndre Jordan, Caron Butler, Eric Bledsoe and one or more draft picks would head to the Celtics. As Arash Markazi and Larry Coon point out, the salary cap math is quite doable. Whether it's a single trade or multiple, this can happen.

Now, a Garnett for Jordan and Bledsoe deal was on the table last year, and the Clippers were tempted by the offer. And given DeAndre's disappearing act in the playoffs, there's room for regret over not pulling the trigger at that time. Garnett is a dozen years older than Jordan, that much is true -- but Jordan has two more years and $22M left on a contract that feels bloated. The notion that he is the Clippers center of the future is likely incorrect -- he probably only has two more seasons in LA before the Clippers move on anyway. Is two seasons of Garnett before moving on really a 'future-mortgage' scenario? Not really.

The same goes for Butler. Pierce is older than Butler, but not by a lot (two and a half years to be precise). And Pierce was a LOT more productive than Butler last season. Basically, in this Cliptics (or if you prefer, Celpers) scenario, the Clippers upgrade at two of their problem positions in their starting five, and the Celtics start their rebuild now, which is when it needs to start. It's a win-win.

How a megadeal might work between the Celtics and Clippers 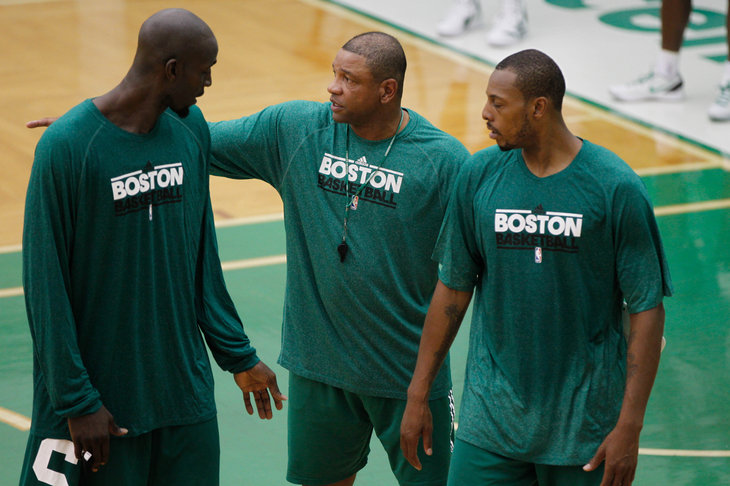 What they're saying about a potential deal on Celtics Blog

Clearly, the Clippers are going to have to include some assets to help jumpstart that rebuild, and the question is exactly how many. And because Rivers' contract in Boston includes a non-compete clause forbidding him from coaching another team until the end of the remaining three years, Danny Ainge will be perfectly within his rights to ask for compensation in exchange for waiving the non-compete.

This is where it all gets tricky. It's reasonable to ask whether Donald Sterling would ever actually employ the highest paid coach in the league; we're through the looking glass already with that idea alone, but let's assume that the lure of an NBA championship is enough to make that happen.

There are two kinds of assets in the NBA -- those belonging to the owner, and those belonging to the team. As a fan, I could not care less about the owner's money -- fans always want the owner to spend freely, and for something like a coach's salary, there is literally no downside (aside from the theoretical long term impact on ticket prices, maybe). But team assets -- young players, draft picks, even cap space -- fans feel almost as much ownership over those as does the owner or the front office. Those are difficult to sacrifice, because doing so may mean creating a very big future problem.

What kind of bargain would Ainge drive, just to hold hostage an unhappy coach that he probably doesn't want anymore? Let's face it -- if Rivers is willing to walk away from $21M, isn't it in Boston's interest to let him do that, particularly if they've come to grips with the idea of Pierce and Garnett moving on? The Celtics can replace Rivers with a much less expensive coach who can work on developing the young players that they'll bring in (maybe someone like Vinny Del Negro).

Now, assume that Rivers, Pierce and Garnett all want this to happen. These men, as much as anyone, are responsible for a championship in Boston, a return to Celtic pride and glory -- they have given a great deal to Ainge and the Celtics over the years. Is Ainge going keep them from pursuing another ring together in L.A. over an additional future first rounder? It's difficult to say. It would be very different if he were making a deal with the Lakers or another Eastern Conference team. But might Ainge be more inclined to facilitate this trade knowing that he could tweak the Lakers in the process? The enemy of my enemy... yadda yadda.

So is Ainge going to load bad contracts like Jason Terry and Courtney Lee into the transaction -- contracts that would essentially be deal breakers since the Clippers would have no more assets they'd be willing to trade -- or insist on multiple future first rounders? Or is he going to find the price the Clippers are willing to pay, and walk away with his restarter package, wishing his close friends and former allies good luck in Hollywood? And by the way, while it's not insignificant to trade away first round draft picks, when you're expecting to be among the best teams in the NBA, it's a little less painful, since you know that pick is going to be low and would only yield a player who would have difficulty finding any playing time.

(The most interesting twist in this entire scenario is the remote possibility that Del Negro could end up coaching Jordan in Boston next season. Jordan clearly needs a fresh start with a different coach -- Del Negro never showed much confidence in his young center, which probably stunted his growth. Jordan was undoubtedly the happiest Clipper when Del Negro's contract wasn't renewed -- he'd be equally unhappy if they were reunited in Boston.)

Over on Celtics Blog, there's a poll asking the readership of they'd support a deal of Pierce and Garnett (and my extension Rivers) for Jordan, Butler, Bledsoe and two first rounders. Seventy percent say yes, and only 18 percent way no. That tells you it makes sense for Boston. Could it get done with fewer Clippers assets, maybe a first and a second instead of two firsts? Maybe. But it might make sense even with two firsts.

At any rate, an idea that very recently seemed quite far-fetched keeps fetching nearer and nearer.