How the Clippers Can Land Iguodala or Afflalo

Even after the proposed Celtics trade, it's still possible for the Clippers to acquire a coveted shooting guard on the market, namely Andre Iguodala or Aaron Afflalo.

Share All sharing options for: How the Clippers Can Land Iguodala or Afflalo

Let's delve into a hypothetical. I'm going to make some assumptions, and then, operating under those assumptions, manipulate the CBA and salary cap in order to create the best Clippers roster possible.

Assumption 2: Paul Pierce is bought out in Boston and wants to come to LA for the MLE. The Clippers haven't signed him yet, but they will. It's just a matter of working the numbers.

Keep in mind that I'm not saying that these things will happen, but that for the purpose of this exercise I'm assuming that they will.

Here's some important rules to remember:

Ok. So in this hypothetical, a trade with the Celtics was just announced. Here's what the Clippers situation looks like: 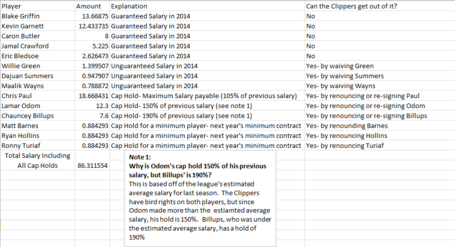 First order of business: re-sign Billups and Odom on the cheap. While it's possible both could be had for the min, Erik O and I agreed that it was fair to give each a $2M salary for next season.

Now, the Clippers have to free up enough salary to both make a trade, and give Paul Pierce the MLE($5.15). They need to do both of these things, and fill out the roster, while staying underneath the apron- expected to be at $75.6M.
Now is where it's time to split the column. First, we'll look at how it's possible to get Andre Iguodala, and then we'll come back to this point and investigate the opportunity behind Aaron Afflalo.

First, the Clippers would need to clear up some space. Waiving the non-guaranteed contracts on the roster is a good start.

This puts the Clippers a good four million dollars under the tax line for 11 players. A cap hold for $490,000 has to be added for the last roster spot, making that amount slightly smaller.

The Clippers could legally do this trade. Check out rule #3 above. The outgoing salary is between $9.8M and $19.6M, and the incoming salary is less than (outgoing salary) + $5M, as long as it keeps the Clippers under the tax line ($71.6M). If the trade put them in the tax, the most that they could pay would be 125% plus $100,000. Let's look at the overall picture if this exact deal was done.

Hey- I can do math. It works out perfectly. The Clippers toe the tax line without crossing it- paying Iguodala the maximum possible while keeping cap holds for their final two roster spots (they only currently have 10 players or cap holds in this scenario).

Unfortunately, there's one critical error here. The Clippers want to be able to give Paul Pierce the full MLE ($5.15M- rule #5). But according to rule #6, the Clippers can't spend over the apron with their MLE. Since the apron is $4M over the tax line, that means that the Clippers couldn't give Pierce their full MLE. In order to give Pierce the full MLE, they need that $4M gap, plus an additional $1.15M. That extra money has to come from Iguodala's contract. So here's what the trade would have to really look like:

And here's what the overall roster would really look like after it:

And, for reference, here's the best deal that the Clippers could offer Iggy under these conditions and the new sign-and-trade rules in the new CBA (see Rule 8)

What would the next step be for the Clippers after this sign-and-trade? Adding Paul Pierce for the mid-level exception. Here's what that would look like.

It gives the Clippers enough flexibility to add a minimum player, but overall the roster is set, as the Clippers would be operating under a $75.6M hard cap.

Ok. That was a lot. Now let's look at a simpler scenario- Aaron Afflalo.

And here is what the overall picture would look like after this trade:

This leaves the Clippers with easily enough room to give Paul Pierce the full MLE. Note that there are no cap holds for empty roster spots here because the Clippers still have 13 players in this scenario. Next step? Sign Pierce, and it looks like this:

This puts the Clippers at just about $1M over the tax line for 14 players. It would, in fact, be very easy to make a couple small changes to get the Clippers under the tax line altogether, potentially saving owner Donald Sterling millions in repeater tax penalties in years to come (millions he'll be spending on a 5 year/ $35M deal for Doc Rivers).

The Clippers can either release Willie Green to get under the tax line, or not bring back any two of the following players: Summers, Wayns, Barnes, Hollins, Turiaf.

So that's two different great options for Gary Sacks and the Clippers front. Bring in Andre Iguodala (if you can sign-and-trade him for that price) and stay under the apron, or bring in Aaron Afflalo and potentially not even pay the tax. Not to mention in both scenarios they have Paul Pierce joining Garnett and Rivers in Los Angeles.

If you think my math might be bad, or if you have any questions, let me know in the comments.