You've cast your votes, but there's still work to be done. Who winds up on the Clippers' version of Mount Rushmore, as the four most important figures in franchise history?

Share All sharing options for: The Clippers Mount Rushmore

In a recent NBATV interview, Steve Smith asked LeBron James who would be on his "Mount Rushmore" of the NBA -- the four greatest NBA players of all time. (His answer -- Larry Bird, Michael Jordan, Magic Johnson and Oscar Robertson -- isn't necessarily important to this discussion, but the absence of Bill Russell and Wilt Chamberlain and Kareem Abdul-Jabbar may have shown LeBron's age a bit as well as demonstrated a slight prejudice against big men. It's not a bad answer, but hard not to have at least one of those guys up there, yes?)

At any rate, the exchange got the various SB Nation NBA editors thinking -- who would be on the individual team Mount Rushmores?

The Clippers have a very different task in choosing an all time list of four greats to represent the franchise than many other teams. The Clippers history is far from storied, and the team has still not yet retired a single jersey (no problem picking your number when you're traded to the Clippers, plenty to choose from). Many teams will have to snub Hall of Fame players who spent their careers playing for their franchise -- the Clippers have no such problem. Finding four worthy inclusions is the bigger issue in Clips Nation.

I asked you, the citizenry, who you thought should be on the Clippers' Mount Rushmore, and received almost 300 votes in about 24 hours. Before I reveal the faces on the mountain and the reasons, let me say that I absolutely took the vote into consideration. The final four up there are not the four I would have chosen, but they are great choices. I did not however simply enshrine the top four vote getters. I felt like there were good reasons to remove certain individuals from consideration, and I also felt like the final choices should represent different things and not overlap with one another too much, so they needed to be looked at holistically.

We'll get to all of the reasons behind the final choices in a moment. For now, here are the results of the vote. (Note that this is not the final totals: I tallied these results while voting was still going on, but the results are certainly representative of a general pattern, and the additional votes coming in do not change that pattern.)

The top four vote-getters -- the only four to receive more than 100 votes each, with a pretty decent sized break from fourth place to fifth place -- were Blake Griffin, Chris Paul, Bob McAdoo and Elton Brand. Those are certainly good choices. They are four of the six players to appear in more than one All Star team with the franchise and they are certainly important players in team history. (The other two multi-selection All Stars are Danny Manning and Randy Smith, fifth and seventh in the voting.)

However, I am using my veto power as the editor of Clips Nation and sculptor of Mount Clipmore to reject two of the top four vote-getters: here's why.

First of all, I have to make room for Ralph Lawler. I was too focused on players when I put the voting form together, and I used the word "Player" in the wording and included only player names in the pre-populated lists. One of the first comments in the post mentioned Lawler, and I realized what a huge mistake I had made, but it was too late for Ralphie boy in the vote. Lawler received a handful of write-in votes, but there's no way he's missing from that mountain, at least not while I'm in charge. The Clippers have a dearth of truly significant players in their troubled history -- but they have been blessed with one of the great broadcasters of this or any other age.

So who among the top vote getters got nixed?

My sense of history makes it difficult for me to carve Blake Griffin's face in stone on a Clippers monument. He could be traded for LeBron James tomorrow, and then that mountain would look pretty silly. We're talking about a 24 year old here -- it's just unseemly to discuss him as an all time great, n'est-ce pas? However... although Griffin is in only his fourth season in the NBA, he is already shooting up many all time lists for the franchise. He is eighth in total points and will probably be sixth or higher by the end of this season. He is currently tenth in rebounds and will be eighth before the first dynamite charge is placed on the mountain. And this weekend he will become the first player ever to appear in four All Star games while a member of the franchise. That's huge. Considering that he, more than any other player, is responsible for a change in the perception of the Clippers, I have to overcome my qualms about the rush to enshrine him and admit that he belongs up there in stone. Undoubtedly he'll deserve it even more before all is said and done, but if he were to blow out his knees tomorrow and never play again (FSM forfend) he'd still deserve to be on the mountain.

Monuments from Around the League

Monuments from Around the League

My calculus on Chris Paul came out differently. Paul will make his third All Star appearance representing the franchise on Sunday, tying him with McAdoo for the second most selections. And Paul is already fourth on the all time assist list for the franchise, after just two and a half seasons with the team (that is probably the single most telling commentary on this team's sad history with point guards if you ask me). However, Paul has spent more than two-thirds of his NBA career to this point playing for a different franchise -- I just can't bring myself to put him on Mount Clipmore ... yet. He'll almost certainly be there eventually, but as of this moment, Michael Olowokandi has scored more points for the Clippers than Chris Paul, so for time being, Griffin will just have to represent the modern era by himself.

McAdoo was the third leading vote-getter in the popular vote, and you would think he'd be something of a no-brainer, but I've agonized over this choice perhaps more than any other. Like Paul, McAdoo played the majority of his NBA career elsewhere -- he was in the league 14 seasons and he played just four and a half with the Buffalo Braves, the Clippers' predecessors. However, unlike Paul at this moment in time, he did have his longest NBA tenure with the Braves. He is one of the few members of the franchise in the NBA Hall of Fame, and the only one who went in as a Brave/Clipper. He was a rookie in Buffalo's third season in existence, and so was part of the very beginnings of the franchise. He won the Rookie of the Year award as a Brave, and he is the only member of the franchise to ever win the NBA's MVP award.

Still, it was difficult to include him, and here's why: because I want to represent different eras on my monument, including McAdoo means excluding Randy Smith -- and I really, really don't want to omit Smith. Smith is the franchise's all time leader in points, games, minutes, assists, steals and probably a few other things. He was a college star in Buffalo and became a hometown hero with the Braves, but he also ties the New York and California history together, as he played two seasons in San Diego after the team moved west. My own personal version of the mountain would have Smith representing the Buffalo era at the expense of McAdoo (who is arguably more famous for winning championships with Magic and the Lakers in the 80s). But McAdoo's case is strong as well, and with the citizenry giving him almost four times as many votes as Smith, I'll defer and keep McAdoo while Smith misses the cut.

So I have three heads on my mountain so far: Lawler, Griffin and McAdoo. I need one more, and this one is tough also. I could rectify my earlier problem by including Smith. After all, this is a historical monument, so having two players from the early history of the franchise isn't necessarily a bad thing. But at the same time, we have very little connection to the Braves teams now, and McAdoo will just have to represent that era. Of our two players, McAdoo last played for the franhise in 1976 while Griffin first played for them in 2010, so we have a 34 year gap in between. Lawler certainly bridges most of that, but at the same time, it seems we should have some basketball represented from those decades.

Brand finished fourth in voting, but I'm going to use my veto once again -- for a couple of reasons. For one, he's a contemporary of Griffin who has only played against him. I'm not going to put a guy who delivered numerous hard fouls to Griffin next too Blake on the mountain. I mean, Thomas Jefferson and George Washington didn't exactly see eye to eye on everything (the anti-federalist Jefferson was wary of the amount of power given to Washington as the first president), but Tom never committed a flagrant foul on George. Besides, the acrimonious circumstances of Brand's departure from Clipperdom is in and of itself enough for me to exercise my veto.

With Brand out of the running, the fourth and final slot goes to Danny Manning, and it's a choice with which I'm quite comfortable. Manning was a Clipper for five and a half seasons, from 1988 until 1994, falling neatly into the big gap between McAdoo and Griffin. He was a two-time All Star with the team as we've already pointed out, and he also happened to be a part of one of the few periods of sustained success for the team, the back-to-back postseason appearances in 1992 and 1993. He's fifth all time in scoring, 14th in assists, 15th in rebounds -- he belongs. Not to mention that he was always a class act; he was traded away in 1994 before he became a free agent, so we'll never know whether he might have re-signed with the team. Sadly we know that Donald Sterling at the time didn't want to try to re-sign him. He's also a somewhat macabre though nonetheless apropos symbol of a sadly prominent part of Clipper history -- his ACL injury early in his rookie season is a reminder of the tough breaks that have long-plagued the Clippers.

So citizens of Clips Nation, without further ado, I give you Mount Clipmore. 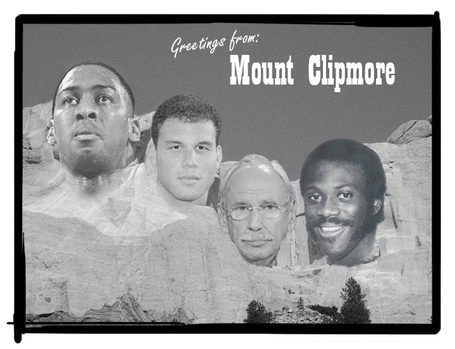 (Thanks to Citizen DeiterDeux for creating the image.)