A look into what ails J.J. Redick

Clipper sharpshooter J.J. Redick has been sidelined for a long time. But why?

Share All sharing options for: A look into what ails J.J. Redick

The Clippers have added two players to solve their roster deficiencies via buyout this past week, but all I can think about is when J.J. Redick will be returning to the lineup. With all the vagueness surrounding this issue, I think it's time to look a bit more into what ails him.

Ok, so what do we know? (Keep in mind I'm a total wannabe, as the first 2 years of basic sciences anatomy in medical school really only skims on much of this. I'm learning as I write this article.)

There's a ton of articles on bulging discs, but here's a short video on it that I think we can all watch to help figure this out:

This is a nice simplified way to look at things. We know that Redick's injury is in his lower back, so around his lumbar area. The bulging of the disc can lead to compression of nerves leading to general muscle weakness and tissue pain supplied by these nerves. (The dreaded "sciatica" can result from this compression, resulting in a pain that can radiate all the way down to your foot.) Now, there's usually more risk of heavy compression in something like a herniated disc, an injury Redick (and Doc) suffered from earlier. Bulging discs, like I mentioned, is seen as a lesser version of this and deals moreso with acute pain and less nerve compression.

When a bulge gets out of control and leads to too much nerve compression, you can surgically fix it via discectomy. You guessed it, that involves removal of the disc and eases the compression of the nerves. To simplify things some more with a term we're more familiar with as Clipper (and CP3) fans, think of your intervertebral disc as a sort of meniscus.. It's a shock absorber and provides stability, so you'd rather not have it removed, especially from your lower back where there's so much movement and tension happening all the time. You'd probably need an implant screwed in after removal that'd result in the fusion of your verebrae to help keep some stability. (Dr. Shipley's follow-up dealing with disc surgery here)

From everything we've heard, the Clippers don't seem to be looking at the surgery route just yet, which is probably a bit promising in itself. Why's that? Well, because a bulging disc can be treated with physical exercises, exercises Redick is likely doing in this picture. 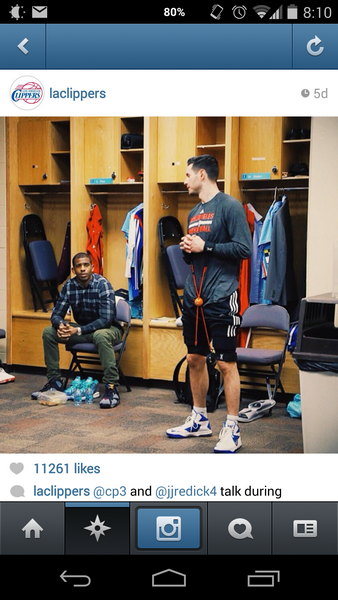 What exercises could he be doing and how could it be alleviating his injury? Take a look at this video:

Nice informative video that goes off some stuff we've already covered. So Redick's disc bulge was likely caused by an acute situation and he's likely going through the ringer with all of these exercises and then some.. That exercise illustrated at around 2:30 is particularly of interest, it really shows what these exercises are trying to do for Redick, trying to center the disc. The entire idea of being "re-evaluated" probably deals with Redick doing a ton of these exercises, getting a follow-up MRI, and seeing if there's a reduction of the bulge alongside hopefully improved symptoms from JJ.

Like the video says, some disc bulging is normal especially with the general wear and tear of aging, often we have it without even knowing it. Back pain is one of the most common complaints in hospitals. Redick has already had some history with back pain, so the Clippers are wise in treating him with patience. We've heard Redick refer to this process as "maddening" and Doc talking about how they need to wait for the disc to "calm down." Well hopefully this helps understand what kind of process this is, and that is truly a day-to-day and week-to-week sort of thing. After looking into it some, I can definitely see Redick coming back from this injury as the fact that the Clippers are treating it with physical therapy probably means the MRI revealed a bulge that wasn't as threatening as it could be, but it all depends on how these exercises help reduce the bulge and hopefully that the bulge doesn't increase. That's a big reason why the team is so hush hush about all of it, because we don't really know how Redick is responding to the treatment for sure until we hopefully see a reduction of the bulge in an MRI and MRIs are expensive procedures you can't just have every day.

Until then, let's hope for something from Redick himself talking about how the exercises may be alleviating his symptoms. But for now we'll just have to wait and see and depend on our medical staff.