What is the secret sauce behind Clippers wins? Check out the latest scoop from our guest number cruncher, Swetha Prabhakar, to understand the Clippers' statistical keys to success.

The Los Angeles Clippers are a dangerous team that no one wants to face in the playoffs. Despite losing Chris Paul to a separated shoulder for six weeks starting in January, Doc Rivers' boys never missed a beat. They are currently the third seed in the competitive Western Conference, just 2 games behind the Oklahoma City Thunder. Why are they so good this season?

There are a lot of interesting anecdotal explanations for the Clippers' impressive record, but I wanted to take a stab at coming up with an objective, data-driven response that is relatable to even the "Basketball PhDs" in the crowd. Using a similar approach to my previous analysis on the Golden State Warriors, I took all the standard box score stats (for both the Clippers and their opponents) and tried to find a way to use these values to predict whether a given game would result in a win or a loss for the Clippers. For you stat heads, this is a simple classification tree analysis. 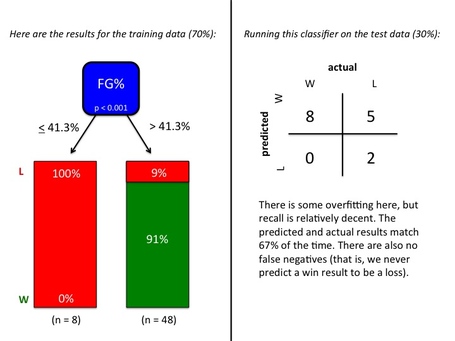 Based on this model the sole statistically significant feature was field goal percentage. When the Clippers shoot better than 41.3% from the field, they have a very high likelihood of winning. [Editor's note: See! I told you guys that shooting has had a huge impact on the Clippers' success this season! I just didn't have a classification analysis. Steve.] In fact, if you were to mark every 41.3% or worse shooting night as a Clippers' loss and the remaining games as wins, you will be right 85% of the time. (Fun fact: The Clippers shot exactly 41.3% from the field in Wednesday night's loss to the New Orleans Pelicans in Smoothie King Center.)

So, you might be thinking: "Great, the nerd just told us that a poor shooting night is indicative of a loss. She is just stating the obvious." If you are thinking that, then (1) you are mean, and (2) you are missing the punch line. The salient point here is that the Clippers are a very difficult team to beat, provided they shoot even marginally well on a given night. The benchmark of 41.3% is very low. In fact, the Clippers have the league's fourth-best field goal percentage, averaging 47.5% for the season. To provide some context, even the Philadelphia 76ers (the worst team in the league in terms of shooting efficiency) average 42.9% from the field.

These findings were initially very surprising to me until I was able to connect the dots. The Clippers are clearly very dominant around the rim, hence the nickname "Lob City." In fact, they shoot an astounding 66.0% within 5 feet of the rim, second to only the Miami Heat in terms efficiency. According to shooting data from nba.com, roughly one third of the Clippers' overall shot attempts are from within 5 feet of the rim. And guess which Clipper takes the most shots from this part of the court? Blake Griffin. They are a little over half of Griffin's total shot attempts, accounting for 33% of the team's overall volume from this range.

When the Clippers win, Griffin shoots a whopping 73.0% from within 5 feet of the rim. His efficiency drops to 61.0% in losses. It is a similar story for DeAndre Jordan, who accounts for 21% of the team's shots taken in this range. Based on the Clippers' shot chart, given how high volume this region is (a subset of the restricted area), it has a really big impact on the team's overall efficiency numbers: 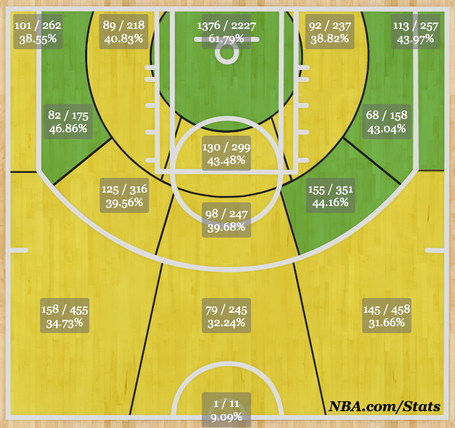 With this in mind, in order to fully understand the success of the Clippers this season, we have to understand the evolution of Blake Griffin. I decided to break up the 2013-2014 season into three periods based on Chris Paul's injury state (pre, during, and post):

Blake Griffin has had clear improvements in points, field goal percentage, number of attempts, and assists since Chris Paul's injury. Luckily, for Clippers fans, he has been able to maintain many of these lifts even with CP3 back in the lineup. One key thing to note is the difficulty of the Clippers' schedule during these three periods. The average opponent win percentage from the pre, during, and post periods is 0.516, 0.486, and 0.489, respectively. Thus, it is likely that external factors contributed at least some to the improvement in Griffin's stats after the "pre" period. Nonetheless Griffin's improvement has been very clear to Clippers fans everywhere!

With the second highest offensive rating in the league, the Clippers are clearly a strong scoring team. However, though I focused on offensive efficiency in this analysis given the output of my model, I will note that the Clippers are pretty skillful on the defensive end as well. This team is the best at guarding in the 25 to 29 foot range and the second best at guarding against the 15 to 19 foot and 10 to 14 foot ranges. It seems to provide them with some margin to have an abnormally low field goal efficiency and still be in the game!

It is unlikely that the Clippers will catch either the Spurs or the Thunder in the standings, but they will definitely spice things up come the postseason. The fact that the Clippers have been so successful at even moderately efficient shooting percentages could make them a genuine threat to emerge from the Thunderdome of the Western Conference playoffs. Oh, and did I mention that one of their best shooters will soon return to the lineup after a lengthy absence?