Doc Rivers has been fined that much is clear and conclusive

The NBA chose to close ranks and defend their officiating crews terrible call from Tuesday night. The league has also fined Doc Rivers $25K for his criticism while ignoring the blatantly false statement released by crew chief Tony Brothers.

Share All sharing options for: Doc Rivers has been fined that much is clear and conclusive

It's time to move on, but with the NBA standing behind their terrible call yesterday and handing down a fine to Doc Rivers today, we have to at least write one final post just to wrap things up.

Ignoring several other questionable calls in the final seconds of Game 5, all of which had to go for the Thunder in order to change the outcome of the game, the one that stands out is the possession call with 11.3 seconds remaining. As you know, it was initially ruled Thunder ball and possession was reviewed via instant replay as is standard procedure in the final two minutes of a game.

The replays clearly show the ball going out of bounds off of Reggie Jackson's right hand. And even if some want to nitpick and say that none of the available replay angles actually show Jackson's hand in contact with the ball (i.e. maybe if we had the perfect angle we could see daylight between the ball and the hand), we don't have to see that to know what happened. Matt Barnes swipes at the ball back and to his left -- the ball flies out of bound straight ahead. Either the ball hit Jackson's right hand, or it isn't a basketball at all but rather some sort of big orange snitch with a mind of it's own from a game of quidditch.

The officiating crew looked at those replays and decided that there was not enough evidence to overturn the call on the floor -- it remained Thunder ball, Russell Westbrook sunk three free throws on the ensuing bad call, and OKC stole a 3-2 lead in the series. No big deal though, right? I mean, when a series is tied 2-2 the winner of Game 5 only goes on to win the series four times out of five.

Doc Rivers was livid at the time the call was made. He had seen the replay on the big screen and after seeing it turned back to his team to begin drawing up an inbounds play. He screamed at the crew "That's our ball! Our f__king ball!"

After the game, a pool reporter asked for clarification of the call from crew chief Tony Brothers. Brothers released the following statement: 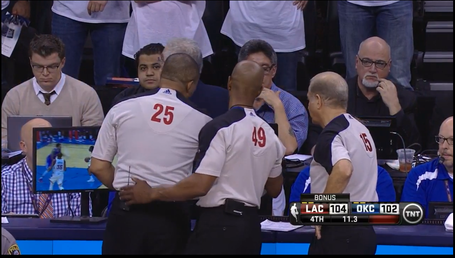 Bear in mind that Brothers was asked only for clarification of the call. He was not asked which replay angles they saw; this is not a case of faulty memory or the question leading him into a false statement. He had the opportunity to craft a written statement to justify the call, and the only important information in that statement -- the only piece of information that is anything more than a regurgitation of the rule book -- is a bald-faced lie.

As Brothers was making his statement, Doc Rivers was making one of his own. He said that his team was robbed, that the call was wrong, that everyone knew it, that it could decide the series.

The Inside the NBA broadcast and Stu Jackson of the NBA muddied the waters some by referring to Rule 8 Section II-c of the NBA rulebook as a possible justification for the call. It is painfully obvious to me that this rule is not applicable on this play for reasons I've explained, but more importantly it has never been used as justification for the call in any official statement by the NBA. It is a red herring.

The Clippers could have filed a protest with the league. They did not. It would not have been upheld at any rate since the NBA chose to close ranks and defend the call.

The following day, the NBA released a statement saying that the officials made the correct call. It said that the replays did not provide the "clear and conclusive" evidence necessary to reverse the call on the floor. It might as well have said that human activity has not caused global climate change. Notably, the NBA's statement makes no mention of which angles were available to the crew during the review. Brothers' official statement from less than 24 hours earlier, which we know to have contained false information, is ignored.

And today the NBA announced that Doc Rivers has been fined $25,000 for criticizing the refs. Saying things like "We were robbed" will get you fined, even if they're true.

So now you're caught up.

It's painfully obvious that the call was wrong. We're all smart enough to know the difference between a call that should be overturned and one that should not. Any one of the three angles that we know the crew saw shows enough evidence to overturn the call. Yet Brothers for some reason felt compelled to lie in his post game statement -- which tells you something. It tells you that he knew they got it wrong, that they willfully got it wrong (perhaps in the name of the bigger picture, because they felt that Barnes had fouled Jackson, a decision they are not allowed to review) and that they wanted some plausible deniability.

There were two applicable situations in Game 1 of the Clippers-Warriors series. In the first, Draymond Green hits Chris Paul's arm, and Paul loses the ball out of bounds. The possession call on the floor was Clipper ball, but upon review it was clear it that Paul last touched ball before it went out of bounds. The officiating crew was only allowed to review possession, so despite the obvious foul by Green, and because of that Catch-22 of the rule book, they had no choice but to award the ball to the Warriors. (Apparently they did have a choice as Tony Brothers has now shown us.) Seconds later in that same Warriors game, Darren Collison loses the ball on a fast break and Stephen Curry plays a Neo-esque game of dodge ball to try to avoid touching the ball as each of them are going out of bounds. That play also was reviewed -- and that one is a great example of a play where the replays were neither clear nor conclusive. (In the replay that might have provided the correct angle, Collison's body passes in front of the camera at the crucial moment obscuring the view.) Curry may or may not have touched that ball -- but no replays show him definitively touching the ball, and if the ball changes course, it does so almost imperceptibly. The initial call of Warriors ball was rightly upheld by the crew because the replays were not clear, not conclusive.

We know the rule needs to be changed. We know it is absurd to review a play, ignoring some things while enforcing others, and in the process getting the call more wrong. We've known this since long before Game 1 of the first round. But we also know the rules, and we also know when we see something that is clear and conclusive. The Curry replay in the Warriors series was not clear and conclusive; the Jackson replay in Game 5 on Tuesday was.

Did Doc Rivers accomplish anything with his tirade beyond making his wallet a bit lighter? Does the NBA know that they screwed up a crucial playoff game in part because of the attention that Rivers brought on it, and will they "make up" for it in Game 6 by giving the Clippers the benefit of the calls? Be careful what you wish for, because if this just becomes a series of makeup calls, then the league will have to make up for the make ups and the Thunder will get the benefit of the doubt in Game 7.

NBA Playoffs Round 2 Clippers-Thunder Game 5 coverage: All even