As we try to do every season here at Clips Nation, we're running a series of "exit interviews" of this year's Los Angeles Clippers. An overview and analysis, player by player, of all 14 Clippers who finished the 2013-2014 season on the roster. In this edition: speedy point guard, Darren Collison.

If you recall, back in September, I wrote a player preview for Darren Collison, in which I had a lot of great things to say about him. So much so, in fact, that I asked Cardboard Corey to step aside to make room for Cardboard Collison. Well, it was just over a month into this season that I started having regrets.

Collison hadn't shown much, if any, of what I had praised him for. He wasn't scoring, he wasn't passing, and he wasn't playing much defense at all. Cardboard Corey even broke out of his Retirement Community and released the neighbor's cat on Cardboard Collison. December was going to be a tough month for me, when this is all I had left of my new pal: 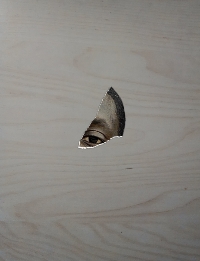 But just as Redick and Paul each started coming down with injuries, Collison stepped up—and he did it in a BIG way. In December, Collison seemed to catch fire.  His jumper looked like pure silk, his aggressiveness on offense returned as he attacked relentlessly, and he even started to show off his playmaking skills. Combined with a new and improved Blake Griffin, this was a formidable offensive force that managed to keep the team playing elite basketball, despite the loss of their best player.

Anyway, this was just the boost I needed. I pulled myself together and reconciled with Cardboard Corey.  We even worked together to rebuild Cardboard Collison. 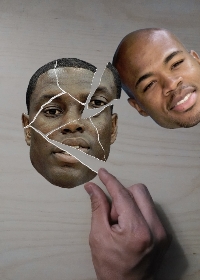 Thanks Corey. What a gem.

Collison's strong play continued all the way through the end of the season, and while he began to falter a bit in the playoffs, he was still one of the best back up point guards in the NBA over the course of the season.

First, let's get the obvious out of the way: Darren Collison is fast. I mean he's really fast. He's got sprinter-genes, so it makes sense, but not everyone who's fast knows how to use that speed. Collison has incredible timing; he knows exactly when he should burst to the goal, so that he can finish his layups before guys like Serge Ibaka even have a chance to swat the ball into the stands. If he's a single step too slow or waits a moment too long, he hasn't got a chance against monsters like Serge Ibaka or Anthony Davis or Jermaine O'Neal (hah get it?). In the same way, he also uses this speed on defense to be one of the peskiest perimeter defenders in the league. His quickness allows him to gamble and recover quickly, which is a necessity for a player that lacks size.

Collison's shot is severely underrated as well. You might not have realized, but he was the 2nd best three point shooter of Clippers that shot more than 100 threes, and 3rd best if you include Hedo and his 50 attempts (which was kind of flukey, if we're being honest).

My favorite thing about Darren Collison, though, is that he's just ridiculously adaptable. I noted previously that he'd started out pretty rough this year, but then he started figuring things out in December/January.  Well, I put together a graph of his per-minute numbers (points and assists, per 36 minutes), over the course of the year: 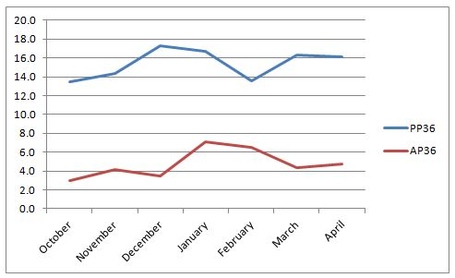 As you can see, after a little over a month, Collison started scoring very well off the bench, as he learned his role on the team. Then in January, Chris Paul got hurt, and Collison had to become both a scorer and distributor, which he was able to do quite well. When Paul game back in February and Collison returned to his bench role, he had a brief dip in scoring, but he immediately bounced back in March and April, quickly returning to his role as a bench scorer.

Collison did everything the Clippers needed from him, and he did it when they needed him to do it. Well, for the most part, which brings us to his weaknesses.

Collison's main weakness, which we already knew of going into the season, has always been his lack of size and strength on the defensive end. For a small player, he's actually got no trouble scoring over the giants of the NBA, but defensively he's good for one thing: the aforementioned peskiness on the perimeter and in the lane.  Sure, he can gamble and still recover, he gambles a bit too much for my taste. When he keeps guards outside of the arc, he's perfectly fine defensively, but the rest of the time, he's a sieve.

Also, as mentioned earlier, in 13 playoff games this year, Collison didn't really "step up" in the playoffs.  In fact, he actually managed to under-perform in most categories during these key games. Some can be blamed on lowered minutes (he was playing under 20 minutes per game in the playoffs), but it was clear that the Clippers' scoring point guard off the bench wasn't really scoring very well. His efficiency was way down, especially from behind the arc, where he ended up shooting only 1 for 12 (8.3%) during the playoffs (as compared to 37.6% from deep on the season). Of course, players like Collison that thrive on chaos and open courts tend to struggle a bit more in the playoffs when things slow down, so it wasn't totally unexpected.

Future with the Clippers

On the whole, it's clear Darren Collison's weaknesses were outweighed by his strengths, so one would hope that the Clippers would be able to bring him back for the 2014-2015 season. Not surprisingly, though, Darren decided to decline his player option on the second year of his contract, making him an unrestricted free agent this summer, where he will likely earn himself a nice payday thanks to his great play this year. Having never earned more than $2.3M in a year, this young player is clearly deserving of more. Maybe he's not quite a starter, but Collison's got the skill to be a 6th or 7th man off a strong team's bench.

If, and it's a big "if," Collison were to come back to the Clippers, they'd likely have to spend their Mid-Level Exception next year to do it, which could be a little steep for a team that still needs to strengthen its frontcourt. It'll really be up to this front office, which has some tough choices to make this summer when deciding which areas need the most attention. But I trust Doc to make the right decisions... or at least to make up for the wrong ones before the trade deadline.

Truly, Darren Collison was one heck of a player this past year, and the Clippers would be lucky to have him back. The Nation will always appreciate what he (and his cardboard doppelganger) did for this team.