A Los Angeles Clippers Player from a Seattle Point of View: C.J. Wilcox

University of Washington star C.J. Wilcox was the 28th pick of the 2014 draft. How can a relatively unknown shooting guard make his mark on a stacked Los Angeles Clippers team? By using a blueprint provided by the NBA Champion San Antonio Spurs.

Share All sharing options for: A Los Angeles Clippers Player from a Seattle Point of View: C.J. Wilcox

Editor's note: Earlier in the summer we began a series of posts focusing on the intersections of the Los Angeles Clippers and the Seattle basketball scene. Revisiting that concept, Dontae Delgado of Sonics Rising brings us this in-depth profile of the least well known of all Clippers, rookie C.J. Wilcox, who played his college ball at UDub. Steve

November 12, 2011. Alaska Airlines Arena, Hec Edmundson Pavilion. Five of us sat in the upper section, in the bleachers, behind the bench of the visiting Georgia State Panthers and a few rows behind the University of Washington Huskies’ band.

I primarily came to see Tony Wroten, Jr., the next star in a line of local products to attend UW. I was also interested in seeing if UW could build off the momentum provided by Nate Robinson, Isaiah Thomas, Will Conroy, Brandon Roy with new faces like Terrence Ross, Abdul Gaddy, Hikeem Stewart, and Shawn Kemp, Jr., the son of former Seattle SuperSonics great Shawn Kemp.

By the end of that game, though, another player had appeared on my radar.

When a good shooter is on his game, it always catches your attention. Ray Allen, Kyle Korver, even a guy like Anthony Morrow. The list goes on and on. Maybe it's the NBA Jam in us. Like 7-footers, they always seem to find a place in the NBA. In the space-and-pace play of today’s game, they are as invaluable as ever.

My introduction to C.J. Wilcox was purely by accident, a mix of a unknown expectations for the upcoming season and his in-game performance. In that contest, Wilcox scored a game-high 22 points, with 5-7 shooting from outside the arc. He was the clear player of the game. Unfortunately, the Huskies season ended up in the NIT, and his last two years at UW weren't nearly as eventful as his arrival.

He remained the face of those underdog UW teams in 2012 and 2013, leading to his being chosen by the Los Angeles Clippers with the 28th pick in the first round. Wilcox’s scouting reports were prototypical for a shooting guard in today’s NBA: he can shoot, and he has the size/tools to defend. He may not have much room to grow at the age of 23 (the perceived apex of a players’ potential), but he is who he is right now.

Being who you are is not necessarily a bad thing, though. Especially if it means you can end up with a career similar to that of an NBA champion, namely San Antonio Spurs guard Danny Green.

Drafted by the Cleveland Cavaliers in 2009 with the 46th pick, Green went from Cleveland to the D-League to San Antonio, then back to D-League, over to Europe, and back to San Antonio again. Coming out of college, DraftExpress said he had taken "his game to the next level as a senior, showing some nice increases in production and efficiency in many areas while playing the largest role he's ever played." He was seen as having "role-player potential, being able to make open shots and play lock-down defense."

I won’t try to rehash too much of what you know about Wilcox right now, but the similarities in scouts' perceptions is pretty remarkable. Wilcox was seen as having "added new facets to his game and increased his efficiency" as his role on his college squad grew larger, and as offering "clear value as a role-playing shooter/scorer at the next level."

Here's a look at some college stats for Green and Wilcox that make the comparison even clearer:

The first thing that comes jumps out at you is the similarities in their scoring (Points/Possession). They not only registered similar results, but the scouting reports say they also scored in similar manners: They’re both excellent long-range shooters and solid from the mid-range, and though they lack elite ball-handling skills and athleticism, when defenders close aggressively they are able to get off a fairly consistent floater in the lane.

The Los Angeles Clippers share positional strengths in the same areas as San Antonio, notably point guard and power forward. Chris Paul is the best passer in the NBA, while Blake Griffin took sizeable leaps in his game over the last season. Wilcox could excel at the NBA level utilizing the same tools that Green uses in the Spurs offense. Green has great floor-spacing awareness, constantly moving to open spots and getting himself into position for catch-and-shoot opportunities—as evidenced by Green’s 3-point barrage in the 2013 NBA Finals.

In this first play, Green brings the ball up and passes to Patty Mills on the right wing. Boris Diaw screens left, and Dwyane Wade steps up, looking to trap or deter Mills from the lane. Green slyly slides along the 3-point arc as Duncan’s screen to a ball-watching Wade gives Green the sliver of light he needs to nail a fairly easy 3-pointer.

Imagine Paul as Mills, maybe Spencer Hawes or Glen Davis as Diaw, and Blake as Duncan. Here's another example:

Imagine Chris Paul or Jamal Crawford driving instead of Tony Parker. Wilcox, like Green here, has the know-how to make timely moves without the ball. Like the last screenshot, Green uses a defensive lapse by the opponent to take advantage of Parker’s drive. 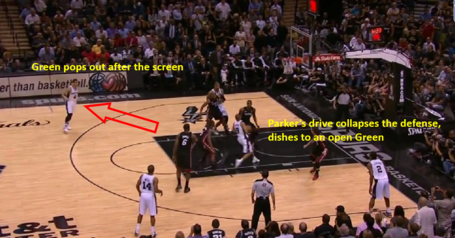 Plays like this saturate Danny Green’s career with the Spurs. These are simple plays that the Clippers could use to maximize Wilcox’s usage and stretch his potential, all the while improving the Clippers' offense.

Now, by no means am I implying that the Clippers should tailor their offense to be the Spurs, or that Wilcox is ready for such a role. Wilcox has not been the defensive stalwart that Green was in college (which may have been compounded by his starting role in the 2012, 2013 seasons). Green and Wilcox do share long-armed defensive ability, being among the rare perimeter players to average more than one block and one steal per game. Wilcox just has a longer way to go on that end in the NBA. He has not consistently shown he possess the natural instincts, awareness, and tenacity that Green has carried to the professional level (think Paul George's struggles as he took on a larger role for the Indiana Pacers in 2013). But he does have some of the same tools as Green, and could very well produce similar results.

Danny Green had to overcome obstacles of his own, as will Wilcox (sharing similar skills as last year’s draft pick Reggie Bullock; climbing the depth chart for playing time behind Crawford, Redick, and even Chris Douglas-Roberts; showing he has room to grow given his age). But as Green showed, hard work and opportunity can make you the perfect complimentary piece on a championship team.

That fantastic 2013 Finals series put Danny Green on the map, solidifying his role on this current iteration of the Spurs. Given similar circumstances, it’s not too farfetched to think that C.J. Wilcox has what it takes to eventually appear on people’s radar.

Just like he did to me some years ago.