A box of basketball cards

Miguel is a long time lurker on Clips Nation. When I asked recently for people interested in writing for the site, he sent me a link to his writings a Medium.com. I asked if I could reprint this piece at Clips Nation and he graciously agreed.

If you buy something from an SB Nation link, Vox Media may earn a commission. See our ethics statement.

Share All sharing options for: A box of basketball cards

It has become a regular thing for me, scavenging for free books at my apartment complex' community library. Technically, tenants are supposed to actually give back the books they "borrow", but since there isn't any real way to enforce the rules, I've availed myself plenty of some literature I'm more than happy not to pay for.

The likes of Charles Dickens and Graham Greene have passed from the library to their proper place on my personal bookshelf and I have no regrets collecting classics that shouldn't be collecting dust in a room full of discarded objects, in the first place.

But in my ravaging for real "literature", I recently stumbled upon a very different sort of treasure - the kind of discovery that immediately elicited nostalgic feelings from my childhood, a time when my preoccupations were much simpler than they are now.

Someone had left in the library two, blue shoeboxes, overflowing with old NBA basketball cards.

It was an impressive collection, mainly by virtue of the sheer volume of it . And there was the semblance of order with which these cards were organized, too.

While most of the box had already been shuffled, many of the cards remained in set stacks, with some featuring cards from players organized by teams...alphabetically.

This was once a serious collector, and my confirmation was this: 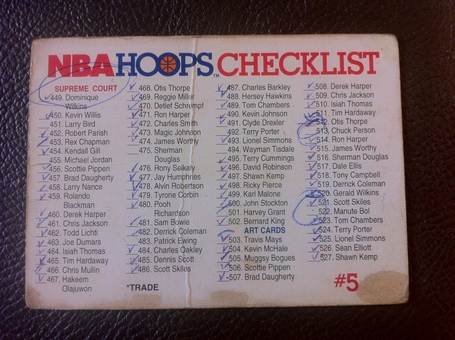 This person actually used the checklist.

And then there was this: 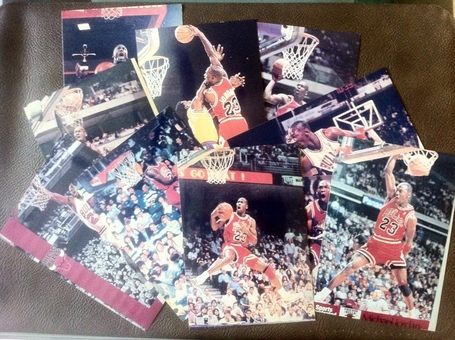 These aren't even basketball cards. These are just cut-up pictures this person took of various Michael Jordan clippings. As if he (or she, who knows right?) wanted to...actually, I really don't know what the story is with these. It just shows that he (let's go with he), was pretty serious.

I figured the boxes of cards wouldn't contain anything valuable, but I couldn't resist having a quick look for myself, just to tickle my own curiosity.

Naturally, I went through all of them. The entire collection. And true enough, it was mostly junk. The kind of stuff you show off at garage sales without actually expecting anyone would bite and buy any of it. And, these were really old cards - like, 20 to 25 years old - which means there's virtually no chance of turning a profit for any of them.

But maybe these will be worth something, eventually: 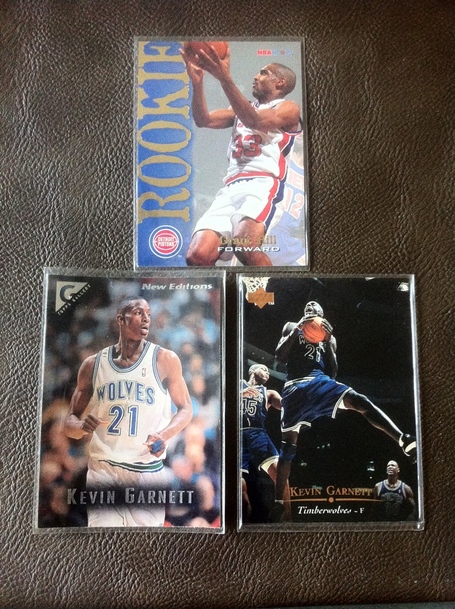 Grant Hill rookie from NBA Hoops, at the top. Two Kevin Garnett rookie cards below. If only Grant's body never betrayed him, this card would have made anyone a fortune. Kevin needs to retire before these two cards could appreciate in value, at all. The fact that he isn't retiring in that same Wolves jersey may or may not matter, but he's a first-ballot candidate for the Hall of Fame once he's eligible, and that's got to be worth something.

Truth is, I don't really know anymore how actual players' careers translate to the value of their trading cards. And gone are the days of me purchasingBeckett Basketball's monthly magazine, which listed the market value for nearly every single card that was released.

I outgrew the hobby of collecting, selling, and trading cards, but I never stopped loving the game. As the residue of dust began to form on my fingers, sifting through the piles of cards (which, surprisingly, were still in near-mint condition) brought me back to a time when my love for basketball was borderline obsessive, yet also, completely innocent. The game had yet to become an activity wherein I felt I was constantly trying to prove I was deserving of my own fanaticism by being able to, actually, play.

Back then, everything about basketball was just, fun. Pure and simple.

Back then, I had just started rooting for these guys: 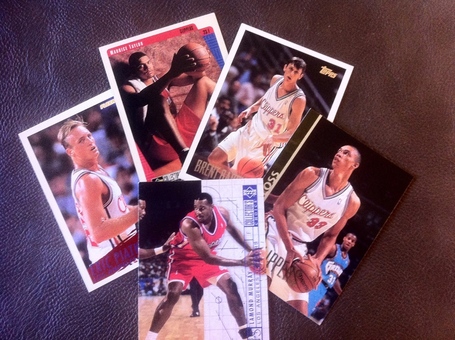 Because, I didn't know any better. Because I hadn't yet known very much about these other guys: 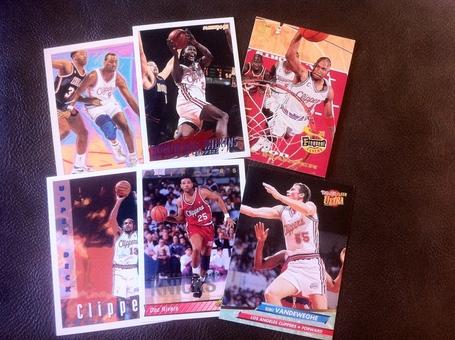 My wife asked me if I knew all the players whose cards I was combing through. I knew them, but I didn't really know.

I didn't actually understand the pain generational Los Angeles Clipper fans (they exist) must feel, if I were to remind them that, once upon a time, they had Dominique Wilkins. For half a season.

So here I was, almost zen-like, picking up stacks of cards and methodically flipping through them, not exactly knowing what the end would bring me.

I only knew that I had to finish the box. I had to look through the whole thing. I had to relive an experience I had almost forgotten. And I had to re-learn what card collectors before me had long already known:

That the Clippers were really, absolutely bad, for a long time and there was no value in rooting for them in real life, as there also wouldn't be if you happened to stumble upon a rookie card belonging to Pooh Richardson.

It was this history of heartbreak - the one that began even well before the days of Michael Olowokandi and the fleeting promise of a Sam Cassell-led playoff team that unraveled all too quickly - that I had now inherited. Because of this, I absolutely appreciate where the team is now, and I can only remain hopeful about where we (yes, "we"!) are still headed. After all,Doc came back.

My love for basketball bled into every moment I opened up a pack of cards, praying for an insert that would make the purchase well-worth it. But I was never very good at pulling the rarest of cards. I must not have had the technique down pat.

I was only ever good, at the act of collecting. It was one of the many ways in which, as a kid, I began to learn what it meant to be a fan, and how to fall in love with a game. 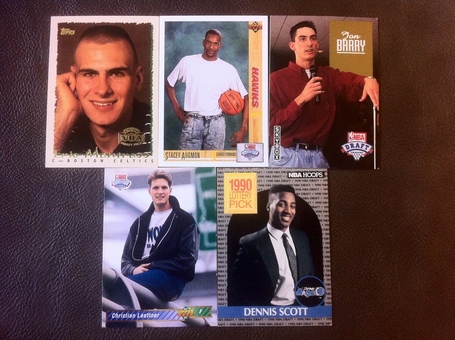 They are so bad, they are good.

Someone should've told Eric Montross to keep his hand underneath his chin, if he was going to glamour on us anyway. Stacey Augmon's stonewash jeans are priceless. So is Jon Barry, motivational speaker. But Laettner could've used some style tips from Dennis Scott.

Not that the guys in recent years didn't commit any fashion faux pas on draft day, but rifling through the boxes gave me a better appreciation for this era's general NBA player look. And yet, I can appreciate the total nonchalance of a lot of the rookie card poses back then. It's as if these pictures were taken for the sole purpose of being stock images to fill photo frames you find at the local arts and crafts store. 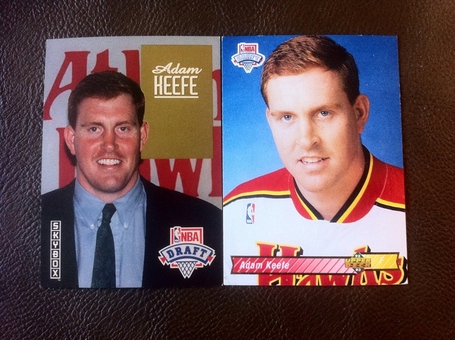 Adam Keefe, for example, was mostly happy just to even get drafted. And at least the Upper Deck card had him actually wearing a team jacket. The safe bet would be just to have players wear their team's stuff. Keefe at least looks mildly excited at being a Hawk. 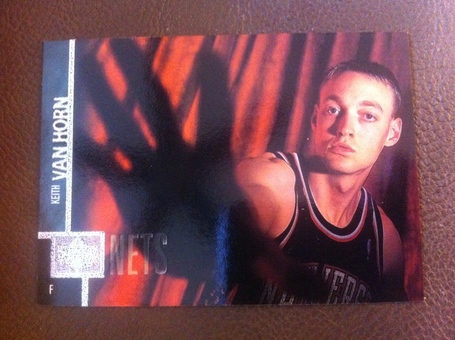 This Keith Van Horn rookie card is at a whole other level of awesome. It's just dripping with mystery. Keith looks like he's doing a magic trick on us. It's all about the art of misdirection.

Not everything, of course, was so banal (or plain weird). Card companies in the 80s and 90s seemed to want to keep things interesting and present the players in fresh, unique ways. 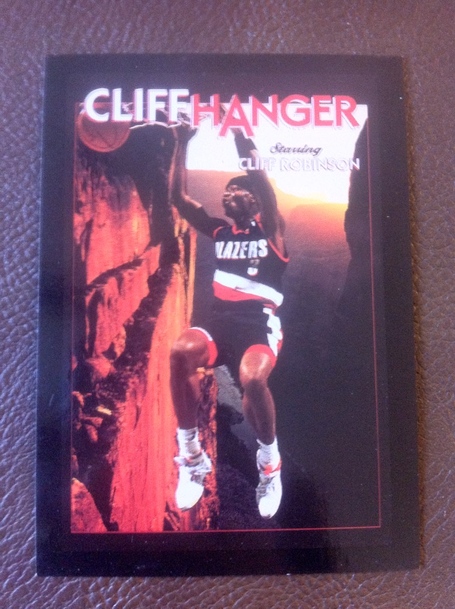 It always made for a good card when the player's name could be incorporated into a pun. Case in point, Cliff Robinson as "Cliffhanger". With apologies to Sylvester Stallone, this just made perfect sense. 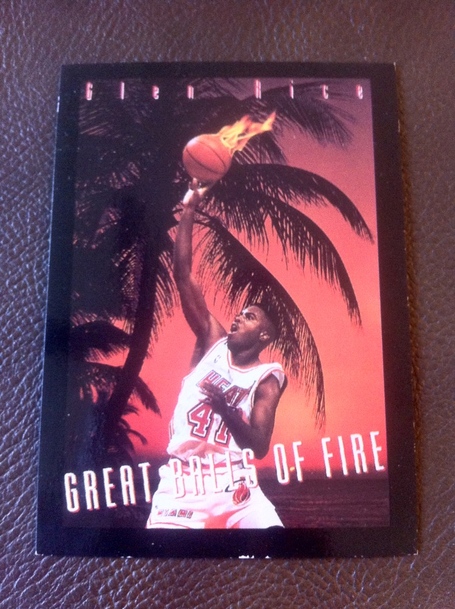 Meanwhile, Glen Rice, who had the benefit of playing for the (then) recent expansion team Miami Heat, was the centerpiece for this gem of a card, with some brilliant copy. That ball is in Rice's hands, and it is in fact, on fire. Flaming balls always made for striking images.

I was never a fan of the "team card", though. Those never had any value, especially since there was no way you could figure out how much the card was really worth if there were twelve guys on it, plus the coach. Still, I applaud the efforts behind these: 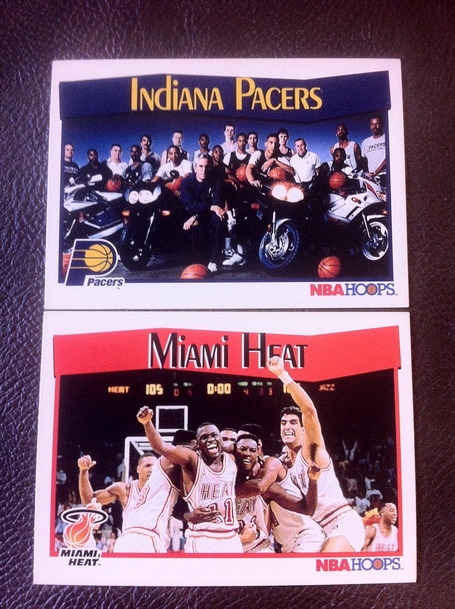 Naturally, it would be even more interesting, pitting certain individual players against one another, on the same card. Basketball may be a team sport, but who cares about that if you have giants, destined to do battle: 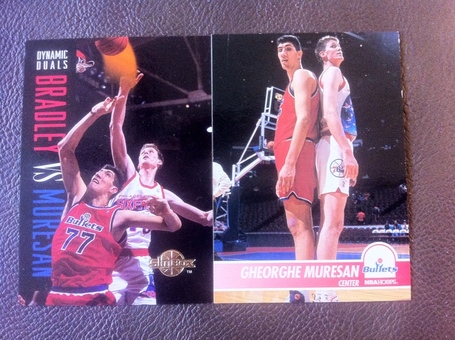 "Dynamic Duals". See the pun there? I do. Brilliant. 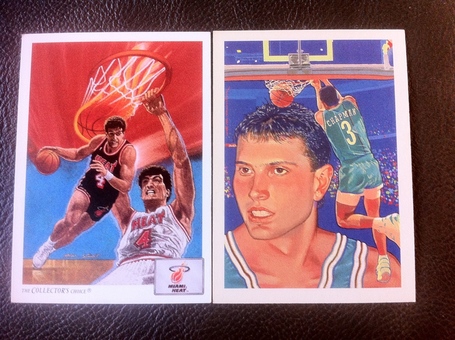 Now, these were works of art. The illustrated card. Or should I say, painting.

I suppose card companies took a page out of the comic book industry in this regard and took their card-making to another universe. I mean, I definitely feel the intensity of Rony Seikaly's jam, juxtaposed with the acrobatic artistry of that delivered by one Rex Chapman.

Of course, most of the cards I found weren't so daring. About 90% of them were your typical, average player card - action in the front, stats in the back.

Here are some of favorites I pulled: 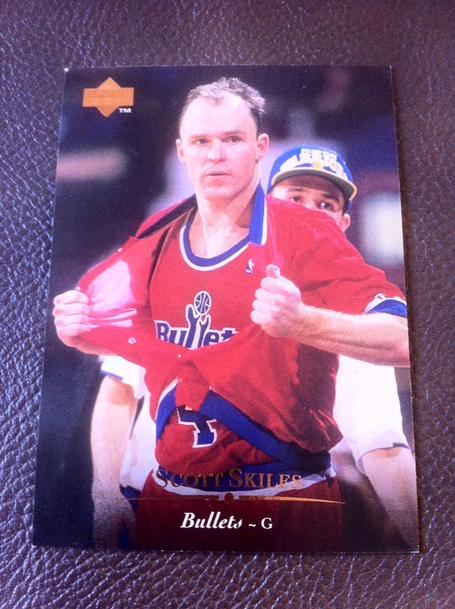 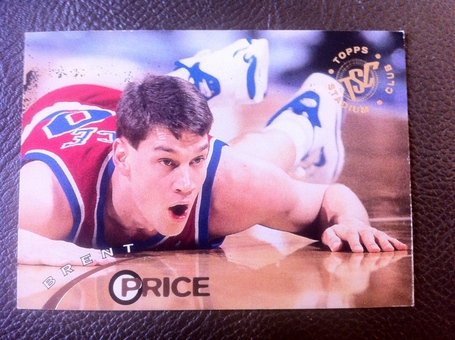 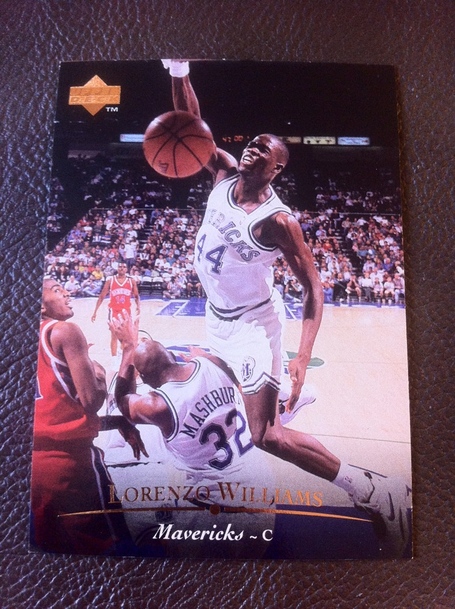 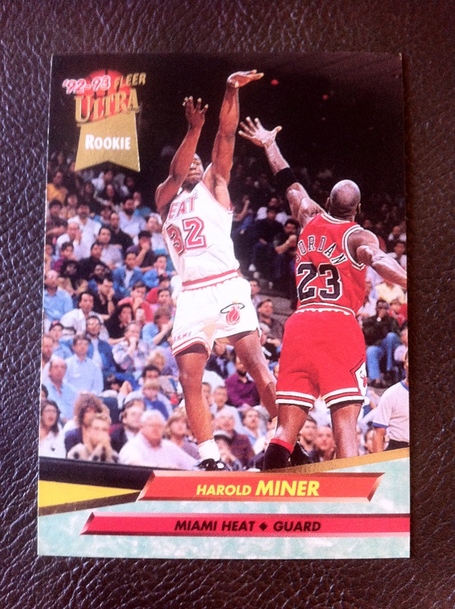 Skiles pulling off the team jacket with such bravado amazes me. Brent Price's expression tells me everything I need to know about how Washington felt by having the "lesser brother" on the team. Lorenzo Williams' posterization of Jamal Mashburn is priceless. And then there's Harold Miner. I actually feel a little sad about this one. Surely Fleer knew what it was doing by making Harold Miner's rookie card one that featured MJ in it. But Baby Jordan's playing career ended way too soon. 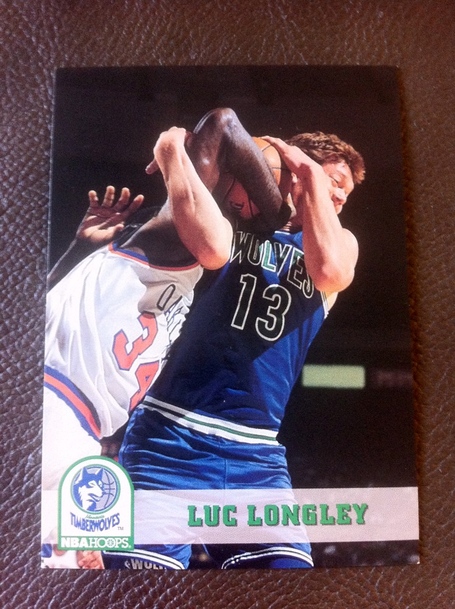 Unfortunately some cards really did players a major disservice. Case in point, Luc Longley. We can barely even see his face. We just see a lot of arm. Many elbows and arms. 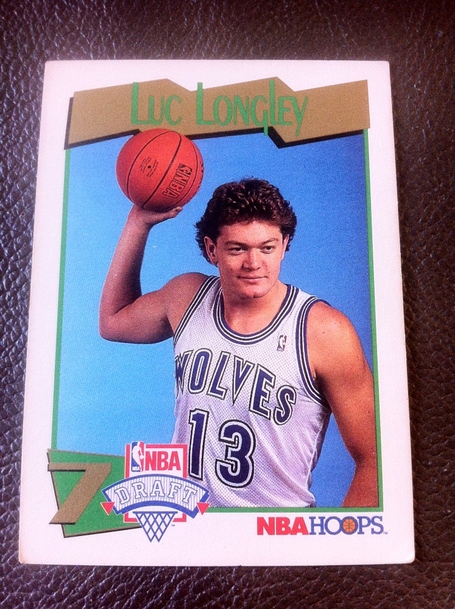 There you go, NBA Hoops, much better. Somehow the Draft Day card was actually better. So triumphant.

And then, there are the real head-scratchers, like these two: 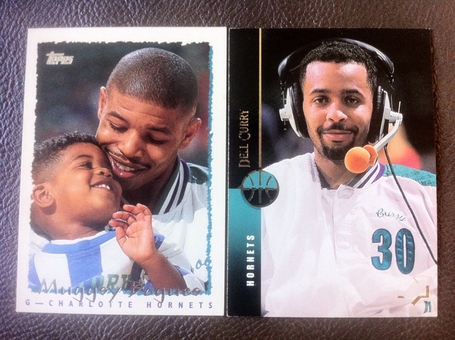 No, that isn't Steph Curry holding a baby on the left. That's Tyrone "Muggsy" Bogues! But that is Steph Curry's father on the right, Dell, doing something nobody knows whether or not he does it best - wearing a headset.

What about shooting 3's? Why does Dell look so smug and confident? He isn't even playing! It just doesn't make any sense.

But neither does this: 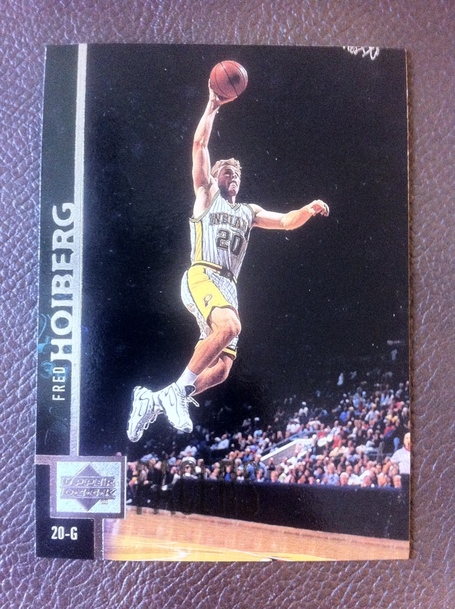 That's Fred, "The Mayor", Hoiberg. He looks like he's in the Slam Dunk contest and he's taking off from the free throw line. Apologies to Fred Hoiberg who I hear is a pretty fantastic coachthese days, but I have no recollection of him dunking, let alone shooting, let alone, playing. I only remember, "The Mayor" being one of the best nicknames ever bestowed upon any player. And for that, I'm thankful.

And still, there's this: 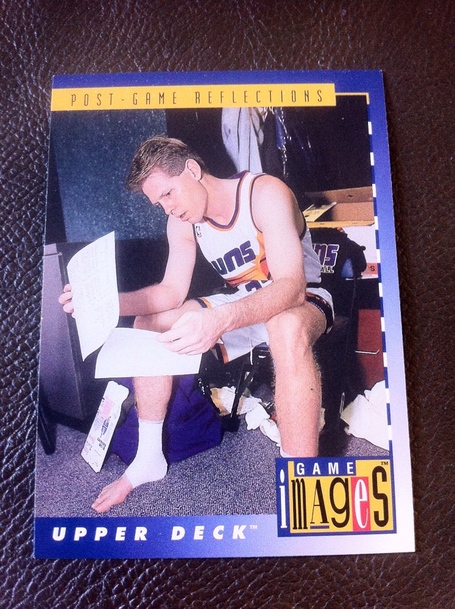 "Post-Game Reflections"? Really? I don't need to see Danny Ainge looking at his own shooting percentages. I'm sure the man could be deep in thought, but this is a fail of a card if I ever saw one. It's almost as bad as a checklist card. I'd rather the player were in the midst of playing, not studying. Perhaps this image shows us what Danny Ainge looks like now, when he's about trade his star players.

In the end, however, there was this: 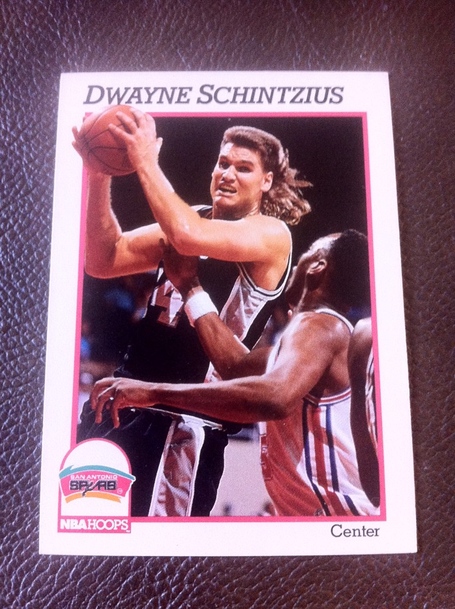 Secondly - my god, that mullet.

The face and hair are front and center. I can't stop staring. I can't even get to the fact that I'll never be able to spell his last name. So much raw emotion. So much 90s bad-hair, awesome.

And if there's one prevailing lesson from this final card, it is this: that history proves once again, in the end, the Spurs always win.