The Daily Clipper — Catching Up on Media Day Edition

New writer Jul Jessup has already caught you up on the essentials of Clippers media day. We're here to fill in the gaps with some tidbits, both from Los Angeles and from around the league.

Share All sharing options for: The Daily Clipper — Catching Up on Media Day Edition

Clippers basketball is back! After entertaining us for a few hours yesterday, the team flew to Las Vegas, where they're beginning training camp today. Keep following us here on Clips Nation for exclusive* insider** coverage of your favorite basketball team.

Dean of Clippers blogging, Mr. Kevin Arnovitz, is back with another gorgeous piece, this time a look into the team's overall attitude this year compared to last:

If you believe that continuity is a measure of viability, then the Clippers are now one of those teams whose stability can guide them forward. The facility on Monday had that new owner smell, and basketball junkie Steve Ballmer figures to be dug in. As one in an exclusive group of power brokers in the league who control both on-court and managerial decisions, Rivers is in Los Angeles for the long haul. The team has Paul and Griffin locked up through the summer of 2017. Redick too. Though Jordan enters the final year of his contract, the Clippers can outbid any potential suitor and now have an owner who is unlikely to balk at a tax bill.

Paul, Griffin and Jordan are temperamentally different, but all are staunch creatures of routine. Paul is the league's best planner. Griffin's preparation is a series of disciplined rituals. Jordan might not be predisposed to routine as a matter of course, but in his first season under Rivers, he saw what order can do for a big guy's game. He loves being alongside Paul and Griffin in the first group up on the stage and seems committed to any plan that keeps him there.

As the Clippers left the facility to catch a flight to Las Vegas, where they will take part in training camp until the end of the week, they are a more contemplative team than they were one year ago, when the to-do list was far too long to breathe deeply, however much calm Rivers projected. This year for the Clippers, calm is the new hype.

J.A. Adande also went to Clippers Media Day, and chipped in with a feature of his own (two ESPN frontpage articles for the Clips in one day? My, how times have changed). He argues that it's time for Blake Griffin to step up and take ownership of a team that incumbent superstar Chris Paul can only carry so far.

The Clippers still need Paul to be an elite point guard, DeAndre Jordan to anchor the defense, J.J. Redick to hit outside shots, Jamal Crawford to provide bench scoring, Spencer Hawes to give them frontcourt depth. If you think about it, it's actually easier to expect All-Star performances from Griffin than for all of those variables to play out. Griffin will be the focal point. He can either overcome bad play from his teammates or undermine them with bad play of his own.

"He realizes that we go as far as he takes us," Barnes said.

Arash Markazi also got a piece in about the Clippers refusing to hang their heads over last season's tribulations and disappointments. Although it sounds like he had his own trials and tribulations on media day.

Clippers media day comes with an off roading parking experience.

The top response to that asks him whether or not he likes One Direction. Buckle up, Arash, it's going to be a long season.

The LA Times posted a preview of the Clippers the other day, although it's very much a piece that reads as if written by a sports columnist than an actual basketball writer (and a beat writer at that). Ben Bolch redeems himself, though, with his coverage of training camp, which includes this fascinating tidbit:

The Clippers are holding camp in Las Vegas, Rivers said, because the Memphis Grizzlies took their spot in La Jolla from last season. Grizzlies owner Robert Pera is a graduate of nearby UC San Diego. "I’m sure he gave them a pretty good donation," Rivers said, "so they got the facility."

Add Robert Pera to the list of Grizzlies we love to hate (although he did try to completely destroy their front office over the offseason, almost losing his coach in the process too). He's got a lot further to go to crack the list of recent Clipper villains, something that'd make for a fascinating article... Hmm...

That's it for real news for today. Let's look at some of the underreported highlights of Media Day.

Doc was asked about Steve Ballmer and before he answered, he reached into his pocket and said "I've got to turn off my iPhone."

"Did you see his abs in GQ? They had to have oiled those up." J.J. Redick on Blake Griffin

JJ Redick on the birth of his son: "When he first came out, I thought he was an alien from 'Prometheus.'"

.@EricPincus asking the REAL questions! Asks Big Baby and Farmar if they have any chemistry issues, since they beat each other up in Finals

Spoiler — they're okay now. If Rudy Tomjanovich and Kermit Washington can make amends, there's hope for all the rest of us. 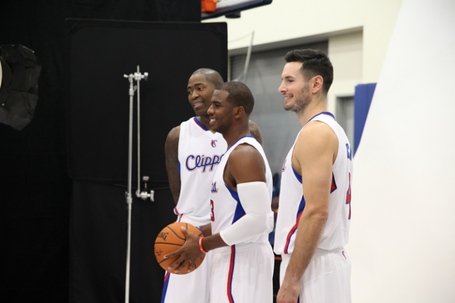 Best looking backcourt in the league. Not the most stylish, though.

"I just feel sexy in these." -- CDR on why he's wearing short-shorts.

I don't know about you, but CDR is already becoming my favorite Clipper.

I had to ask CDR about the short-shorts - answer involved feeling sexy - long shorts played out - doesn't want to be bogged down, down there

Clippers got some nice selfies too: 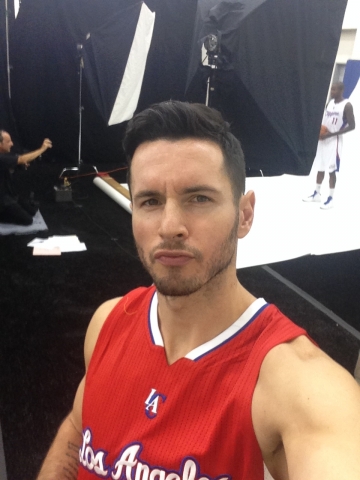 All gorgeous, but they don't hold a candle to this one.

You Redick fangirls need to settle down. This is the best Clipper selfie by far: pic.twitter.com/KLCn5KOBtc

Hawes wins the "who can spread their legs the widest" contest. pic.twitter.com/1cLqOmhDaF

Looks like the team had a pretty busy schedule yesterday. Hopefully they were able to cool down last night in Vegas (or this morning, if they're still up).

Going around the league, let's stop by quickly with a more serious read — Tom Ziller's Hook on why the NBA's partnership with Dr. Oz is problematic.

So here's the problem for the NBA. Dr. Oz has used his fame and daytime syndication deal for good and for bad. He rakes in dough for selling fake miracle drugs, but he and his wife have also created, funded and likely scooped up outside funding for this neat non-profit which intends to teach the right message about health to kids. The NBA could really use the help of the non-profit. Dr. Oz, who has been hit hard recently in the public eye (see the previous paragraph, all of which dates to this summer), could really use the NBA. That's the rub: to accomplish its goals, the NBA has to help rehabilitate a huckster's image. Is it worth it?

I guess the question comes down to whether we think selling snake oil should have social consequences and whether Dr. Oz's fame outweighs his infamy. Should we expect our corporate institutions, like the NBA, to regulate morality, or are we asking too much?

Also in serious investigations from SB Nation, Rodger Sherman uncovering a true NBA conspiracy — Kevin Durant can't actually palm a (NBA-size) basketball. Wake up sheeple, your hero is not as he seems!

Steven Adams showed up to Media Day fully mustachioed, although it's apparently only for the media guide. I'd love him 110x more if he was a Clipper (as it stands, ughhh). 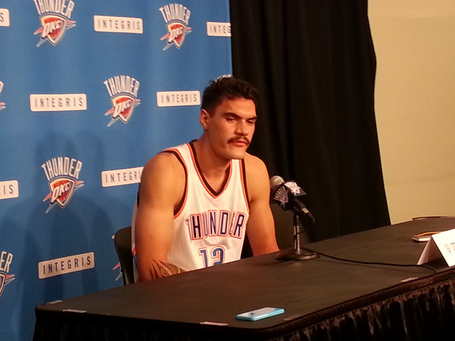 He can't match up to the Wizards though, who have team solidarity on their side. 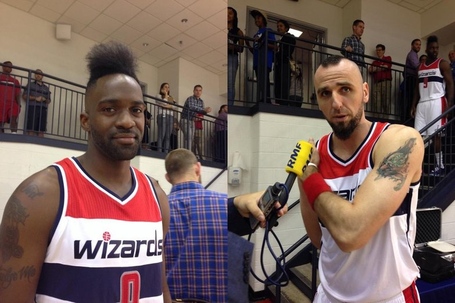 Bruno Caboclo plans on being better than Kevin Durant. He's already getting props from other NBA players, according to Hoops Habit.

But while in Los Angeles, Bruno also had the opportunity to play with and get feedback from players around the league. "I had the chance to play pickup games in L.A., at the Clippers facility. Played against several stars from the Raptors and Kevin Durant, Chris Paul, Paul Pierce, Blake Griffin, Barnes, etc. So many NBA players were there during that week. At the end of the day, they all came to talk to me, inquiring my age, my nationality, etc. Basically, they gave me their support by complimenting my game and told me to keep it up and keep playing hard. It a was good experience."

Speaking of long-armed Durantula clones, the Milwaukee Bucks did a team AMA on Reddit. Here are a few highlights, including our old friend Jared Dudley (who apparently did this last season — does anyone else remember?).

Some more photos from Media Day:

Sleeved jerseys are TRASH and this might be the worst one to date pic.twitter.com/QrFe30Za4X

Who's responsible for this? pic.twitter.com/yaQrlFcTC1

Reminds me of every girl I see at the mall. RT @hartzellNBA: pic.twitter.com/HpFJY8MXRj

Wait, let me try this. "Slide up in your DMs like..." pic.twitter.com/0U0NKfQoa9

And this one is just too cute not to share.

Speaking of goats, our Goat of the Week is Jeff Miller of the Los Angeles Register (which I was unaware till now was a thing), who decided it's never too early for a #HotSportsTake. With a title like Clippers have everyone excited now, but how about in six months? you know he's getting ready to spit some fire truths about this team.

Sorry, but as much fun as they are to watch, the Clippers remain a player short. When you have a "Big Three" that includes someone known only for defense, dunking and shooting free throws as if the basket were threatening to shoot back, you don’t really have a "Big Three" at all. Maybe now isn’t the best time to be so blunt, what with the Clippers opening training camp this week undefeated and this being their official Media Day, a gathering so feel-good that the sun reportedly rose twice here Monday.

Tell us how you really feel, Jeff.

These guys are great at selling us insurance and cars and sub sandwiches. Isn’t it about time they produce a postseason worthy of their commercial breaks?

And here, the Clippers were excited, really excited and very excited. What ultimately matters for these guys, though, won’t come around for another six months, which might sound like a long time but really isn’t when trying to solve the problem of being a player short.

Well then. Guess he won't be attending training camp in Vegas (he's missing out!). Here's a look at their schedule.

The team will hold four sets of two practice sessions per day on Sept. 30 through Oct. 3, with a single practice on Saturday, Oct. 4. The Clippers will open the preseason Oct. 7 at home against the Golden State Warriors.

We'll keep you updated going forward. Till next time.