As we wrap up our Preview series, we focus on the man who controls everything for the team. He deals with personnel movement and X's and O's in an effort to bring the Clippers their first title in franchise history.

Time. It waits for no man. In the case of Doc Rivers, time is not really on his side right now. Rivers, now 54, enters his 17th season on an NBA sideline and is commanding men that he believes have a chance to make history. The team he is now in control of is one that he has systematically built ever since his arrival in Los Angeles. The bench overhaul is all his doing. As was acquiring J.J. Redick, the team’s current starting shooting guard, via a trade shortly after Rivers’ arrival. For the first two years at the helm, the team has won 113 games and is currently amidst their best success ever. Success, however, comes with even bigger expectations. Those expectations could be the weight that ultimately crushes him.

The Los Angeles Clippers sent a 2015 first round draft pick to the Boston Celtics as compensation for Doc Rivers in a trade two years ago. While that pick turned into R.J. Hunter, the organization acquired something far more valuable than a late round pick out of this experiment; they received a calming influence in the most turbulent of times. Throughout the entire Donald Sterling ordeal, Rivers was the one who kept the locker room intact and handled everything on a daily basis. Eventually, in June 2014, Rivers became the President of Basketball Operations and just two months later he signed a five-year extension with the team. Rivers is seemingly here to stay for the foreseeable future, but this is a results oriented business and the team’s overall results have to get better; especially in the playoffs. Not everyone is safe from ridicule. Not even Doc Rivers.

we might be looking at the last stand of Doc [Rivers].

Rivers has been a fantastic coach for the team, able to churn out the top offense in the league each of the last two seasons. While it’s hard to fathom a team featuring Chris Paul, Blake Griffin, DeAndre Jordan, and J.J. Redick not having the top offense – or one of the top offenses – in basketball, it’s still a worthwhile feat for a coach well-versed in excellence. The man has molded the minds of men during his time with the Clippers. The most glaring example, of course, is Jordan. Prior to Rivers’ arrival, Jordan was the starting center, but oftentimes was benched in critical fourth quarters by Rivers’ predecessor, Vinny Del Negro. Jordan was essentially shunned and shamed for his free throw shooting and struggled on both ends of the court due to that lack of confidence. Rivers gave him the confidence to be the player he is today.

In addition to what Rivers has done for Jordan, he’s turned the Paul-Griffin pick-and-roll into one of the deadliest tandems in league history. The pick-and-roll for the team itself has never been as proficient as it is now. Whether you want to credit Rivers for what he’s built around the two main superstars is up to you, but Doc has certainly done the things necessary to help the team improve every year in that department. While the defense has been hit-or-miss at times, Rivers has squeezed enough out of that end of the floor to provide meaningful results the last two years. He’s helped turn DeAndre Jordan into a Defensive Player of the Year candidate and aided Blake Griffin enough to help Griffin turn into an adequate defender, which is a far cry from what he used to be. Rivers has earned the trust of the team, but the lack of games beyond the second round is certainly an issue. 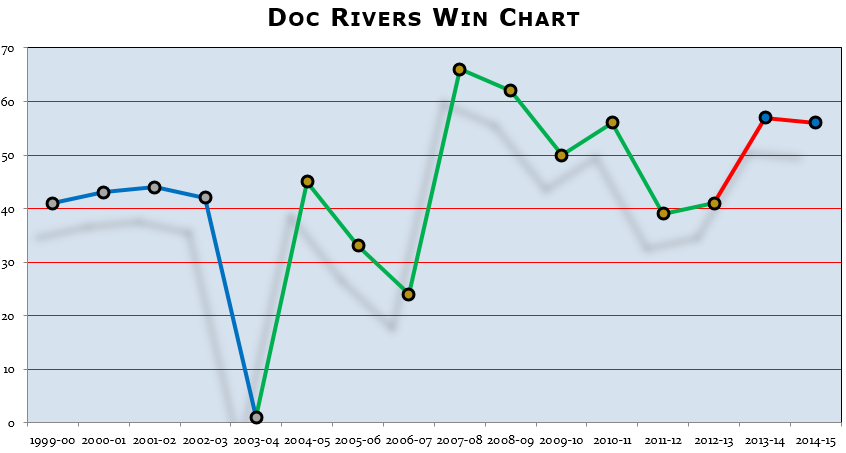 It’s not easy to say, but Doc Rivers might be facing a ticking clock right now. Positive results are required under a new owner. You don’t pay $2 billion for a team without having some expectations and it’s safe to say that Steve Ballmer certainly has massive expectations. If the team fails to get beyond the second round again, it might not be entirely crazy to surmise a scenario in which Rivers is gone by the start of next season. New contracts, or contract extensions, don’t mean much in the sports world anymore. Not with owners willing to pay handfuls of cash to get rid of coaches every three years or so. If Rivers can’t produce the results required, then perhaps this won’t be a job he has for long. That’s not to say the team would be better off without him. That’s just to say that’s how the cookie crumbles.

Rivers’ success with the team certainly cannot be understated, though. They’ve won 113 games with him manning the top spot on the bench the last two seasons and have reached the second round in consecutive years for the first time since their name changed to the Clippers. Think of the Clippers as a ship – which is ironic – sailing into uncharted waters. They have no way of knowing where to go, but they know their final destination is land. They have capable hands on deck and the man at the helm is trustworthy and steadfast in his ways. The team, whether or not you want to call them a failure for the way they’ve bowed out in the playoffs the last two seasons, has knocked off the last two NBA champions – San Antonio Spurs and Golden State Warriors. There have just been circumstances where the team has been unable to get out of their way.

Doc Rivers might be facing a ticking clock right now.

The question of whether the team’s inability to stop tripping at the worst times is Doc Rivers’ fault is a very valid one. He grates on the referees, working them until they no longer can stand him barking in their ears. Rivers finished with nine technical fouls assessed against him last season, which was tied with Flip Saunders for the second most in the league. Only Derek Fisher, Tom Thibodeau, and Frank Vogel had more – each with ten. The team, in some ways, has taken on Rivers’ boisterous attitude with officials. Former Clipper Matt Barnes, who was traded this offseason by Rivers – along with Spencer Hawes – for the much-maligned Lance Stephenson, led the team in technicals with 13 last season. According to Sporting Charts, the Clippers lead the league last year in player technical fouls and were tied for second in coach technical fouls. Their 85 technical fouls led the league. Technical fouls have always plagued the Clippers with their current personnel, but Doc has brought a new issue to light; one where the coach joins the players in being vocal about mistreatment.

Doc Rivers is certainly the type of coach to lead the Clippers to the Promised Land, but if he is unable to do so then this could be his last hurrah with the team. At the very least, a berth into the Conference Finals is probably what will be required this season. Under the crushing weight of a new owner, a reportedly volatile work situation due to a strife with a fellow co-worker, and the team’s lack of fortitude in the toughest of situations lately, this could be the straw that finally breaks Doc’s back. 17 years is a long time on a sideline, even if you’ve spent it with three different organizations. Rivers has seen a ton of things in his life as a coach, but the pressure is on to win and to win now. The team needs Rivers’ leadership and fortitude to earn that title. If not, we might be looking at the last stand of Doc.