It wasn't smooth, it wasn't great, and it wasn't aesthetically appealing. But it was a win against a team the Clippers should beat. Even bigger, the team returned home on Ralph Lawler Night and brought a victory with them in his honor.

Share All sharing options for: Clippers 89, T'Wolves 76: Sloppy But Successful

Sometimes the most rewarding wins are the wins in which you play like complete and utter trash and still manage to pull the game out in comfortable fashion. That was tonight. The game was a hot mess nearly throughout and it devolved into a terrible Summer League type game for vast stretches of the fourth quarter. Yet, at the end of the day, the Clippers walked away with a victory over a team they should beat. And did so without Blake Griffin and Jamal Crawford, two of their top six players. Not to mention that Chris Paul played on one leg.

It was clear from the outset that Chris Paul wasn't even anywhere near 100 percent tonight. He might not have even been anywhere near 50 percent, if we're being honest. However, he still battled and led the way for a Clippers attack that featured mainly just J.J. Redick and DeAndre Jordan for wide stretches of this game. Paul said he got treatment all day today but that he has to be smart and understand that he doesn't want to hurt the team. He did at times tonight, though, with his inability to get anything for himself. At one point in the game, he took a painful looking one-legged shot near the left elbow and seemed to hate even using his right leg to do anything other than hobble around the court. But, in true Point God fashion, he battled for nearly 30 minutes tonight and finished with a game-high 15 assists to go with two points on 1-for-6 shooting.

The real story of this game, as far as the Clippers are concerned, is that DeAndre Jordan and J.J. Redick stepped up and carried the team all night. They both logged 39 minutes and both had over 20 points. Redick had a game-high 26 points on 10-for-19 shooting and even chipped in with five rebounds and good defensive rotations on Minnesota's notable shooters. DeAndre had 20 points and a game-high 17 rebounds, as well as a pair of rejections. Matt Barnes and Austin Rivers each chipped in with 13 points themselves to give the Clippers just enough to pull this one out. This was probably a "C" game for the Clippers. Maybe even worse. But it was enough tonight since the Timberwolves didn't really show up that much.

Except for great first quarters by both Andrew Wiggins and Nikola Pekovic, and a third quarter explosion by Adreian Payne that featured probably four dunks, Minnesota's offense was kept under wraps and looked even worse than the Clippers did. Ricky Rubio almost matched Nate Robinson's horrible shooting night, going 1-for-8 while Robinson went 1-for-9. Kevin Martin was 2-for-6 and took a couple stupid shots that he had no business taking. One, that immediately comes to mind, was on a 2-on-1 fast break where he stopped in the mid-range to take a jumper when he had Wiggins running with him. It was moronic.

The Timberwolves bench wasn't much better with Gary Neal being really the only bright spot as he nailed a handful of shots and finished with 9 points. Honestly, both benches -- outside of Austin Rivers -- were terrible. The two teams had their benches go a combined 19-for-54 (35.2 percent) from the field. If you remove Rivers, it goes down to 14-for-46 (30.4 percent). In fact, it might not even be a stretch to say that Rivers was the second best guard in the entire game behind Redick. That's how sad this game was.

Minnesota was a woeful 12-for-60 (20.0 percent) from outside of 8 feet in this game. They just had no semblance of outside attack whatsoever. Everything had to be scored around the rim but even that was a chore for them. They were just 21-for-39 inside the paint altogether. Meanwhile, the Clippers shot 19-for-52 (36.5 percent) from outside 8 feet while going 18-for-30 inside the paint. Basically, the Clippers just outshot the Timberwolves everywhere. Except the free throw line. Both teams were horrible there.

Speaking of horrible, the fourth quarter was a slap in the face to actual basketball. Through the first eight minutes of the final frame, Minnesota was stuck on just four points. It was that sad. The two sides combined to shoot 31.7 percent (13-for-41) in the fourth and made basketball unpleasant. At least we got to see the greatest Clippers lineup of all-time, though: Robinson-Wilcox-Hamilton-Jones-Udoh. That unit played the final 1:37 and went -5 but it doesn't matter because their greatness is forever etched into the annals of Clipper lore forever. Long live that boss lineup and everything they stood for.

Nate Robinson is not easy to watch. Sure, he runs around the court like a chicken with his head cutoff. But that's the good part of him. His shot has no confidence behind it, his defense is beyond deplorable, and there's nothing he did tonight that showed he belongs on an NBA court outside of grabbing five rebounds. I know he's trying. I get it. He's also just there to be a warm body until both Jamal and Blake come back. I understand. The problem is that he's a detriment to the entire team when he's on the floor and asked to do anything of substance. Only a few more days until his 10-day contract runs out but I can't see him getting another one unless Jamal's injury is still a big deal and Doc Rivers just seriously thinks Nate can do something positive. But I don't see it whatsoever.

All in all, a win is a win. Even if it's sloppy and sad to watch at times. They all count the same at the end of the day. You'd rather win ugly than lose pretty in life. In short, the team just has to get healthy. Chris Paul's now banged up, J.J. Redick is going to die on the court from overuse due to everyone else being injured, Jamal Crawford has the calf injury, and there's no word on when Blake Griffin will be back. The team has turned into the Walking Dead and will be making that tough march into Oklahoma City on Wednesday night to meet the Thunder and Russell Westbrook. You know, the same guy that is basically decapitating the rest of the league right now.

After the game in Oklahoma City, it's onto Dallas for a stop before coming back home to play Houston and Charlotte. All four of those teams, starting with Oklahoma City on Wednesday, are playoff teams at this moment in time. These are all teams with something to play for. Two of them are 8-seeds right now. They have more to play for than most. The Clippers just have to scratch, claw, and will themselves through the games and see if they can nab whatever wins they can. The dog days are upon us. There are no easy games left, for the most part. And with three of the top six guys ailing, it's up to the rest of the squad to step up. But enjoy the win tonight, even if it didn't look pretty. As Chris Paul said in his post-game interview, "anytime you win, it makes everything feel a little bit better." 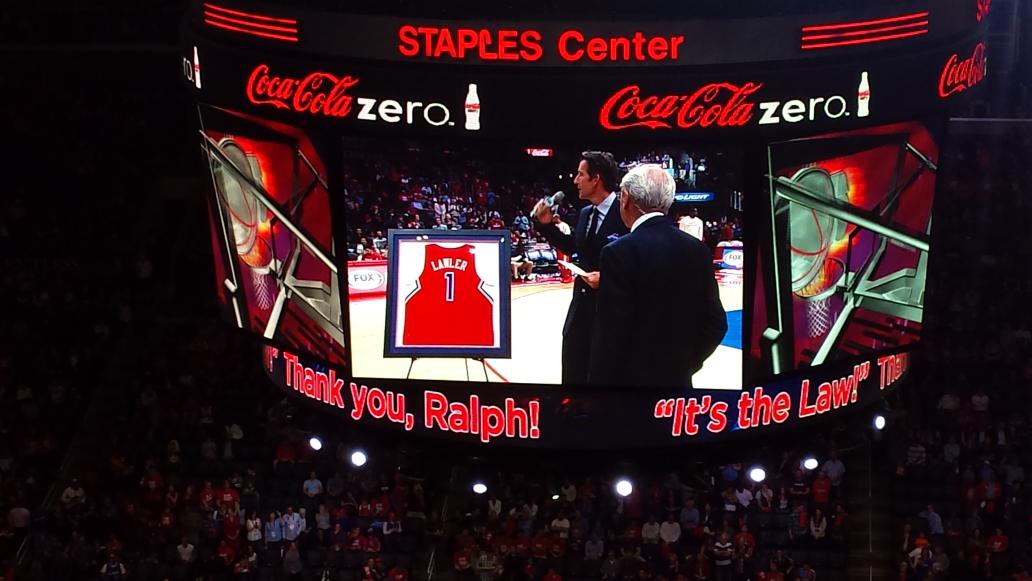