In a crucial game for both teams, the Clippers used a team effort -- led by their diminutive point guard -- to silence the Wizards. By doing so, the Clippers look like they're about to take off for good.

In a game that was possibly a “must win” for each side, the Los Angeles Clippers trailed for a grand total of 50 seconds. All 50 seconds came within the first 120 seconds of the game. After that, it was all home team. The team never allowed the Washington Wizards to get any closer than six points during the final 43 minutes and 52 seconds of play. That’s always a positive sign no matter how you slice the pie. Leads like that make games like this somewhat easier to win. Especially when you shoot like the Clippers did against an elite defense all night.

There’re quite a few stories to take away from this game but the biggest, by far, is how well Chris Paul played in his head-to-head matchup with John Wall, the Wizards dynamic point man. Paul finished the game with a game-high 30 points, game-high 15 assists, 6 rebounds, and 1 steal with 1 turnover on 12-for-21 shooting. He led the team in scoring, assists, and plus-minus. While plus-minus is a flawed stat at times, this game proved it can tell some of the story. Whenever Paul was on the floor, he dazzled the Wizards with an in-and-out dribble, knockdown shooting from the elbow, and precision passing that constantly found the open man. This might have been one of Chris Paul’s finest games as a Clipper considering the level of talent opposite him.

The other four starters also played great, so let’s not forget about them. Blake Griffin finished with 22 points, 6 rebounds, and 5 assists while going 10-for-19 from the field. He did only go 2-for-7 from the line but that can be forgiven on nights like this when he played a great all-around game. His jumper was falling, he was attacking the basket with such ferocity that it drew two flagrant fouls on Washington, and he did his job all night. J.J. Redick raced around the court as usual and finished with 26 points on 9-for-15 shooting. Due to going 4-for-7 from three, he set the Clippers single season record for threes made, which now stands at 164. DeAndre Jordan chipped in with 10 points and 23 rebounds to go with 3 blocks. He was a presence all night long and forced the Wizards bigs to constantly step out into the mid-range if they wanted to actually score. Most impressive is that Jordan finished with 23 rebounds while the entire Wizards team had just 36 and the Washington starting lineup only had 24.

As for the game, it had a solid flow to it all night. The Clippers nailed a franchise tying 11 threes in the first half and had 33 total assists on their 45 total made shots. The ball movement, flow, and offense moved perfectly for much of the contest. They finished the game shooting 52.3 percent from the field and 52.2 percent from three. While they only made just one three in the second half, their penchant for attacking the rim and getting wide open mid-range jumpers for Paul and Griffin proved to be enough. They also held Washington to just 6-for-19 shooting from beyond the arc and 20-for-40 inside the paint. The majority of Washington’s damage, as usual, came from the mid-range.

There was a scare in the fourth quarter when the Wizards used a nice little run to cut the Clippers lead down to six but then Paul and Griffin returned to deal Washington the death blow. There was also a third quarter barrage where the Wizards made everything they took from the mid-range area. In that period alone, Washington went 9-for-13 from 8-to-24 feet. They went just 2-for-6 from inside 8 feet and beyond the arc. The Clippers denied them easy shots and forced them to take the mid-range jumpers they love to take in order to beat them. It worked tonight.

Overall, the Wizards only shot 12-for-29 inside of 8 feet. While Jordan was locking the paint down pretty effectively, it should also be noted that Washington missed quite a few easy baskets. There was a stretch early on in the game where they missed about four layups in a row and it made no sense. Games like that happen. Players miss easy shots sometimes. On the flip side, the Clippers went 15-for-21 inside of 8 feet and did damage outside the arc (12-for-23). Anytime you go 27-for-44 – 61.4 percent – from the two most efficient areas of the court, you’re likely to have a grand ol’ time. And the Clippers did.

On Washington’s side, John Wall finished with a team-high 19 points, team-high 10 assists, and also pulled down 6 rebounds. He only shot 7-for-18, though, but did wind up giving the viewers a dazzling 360 layup that he’s made so famous already. Bradley Beal had 18 points but couldn’t keep Redick under wraps, oftentimes getting caught up on screens or just being too far away to make a difference defensively. Nene and Marcin Gortat had 14 and 12 points, respectively, but mostly lived in the mid-range area of the court; especially in the third quarter. They combined for just 12 rebounds, though, and got outworked by both Jordan and Griffin. Kevin Seraphin and Drew Gooden led the way off their bench with 10 points apiece.

The Clippers bench didn’t play that bad, honestly. They only combined for 17 points on 6-for-14 shooting but Hedo Turkoglu hit both of his threes and Nate Robinson hit a good three off a pick-and-roll. Austin Rivers and Spencer Hawes also had contributions with 5 and 3 points, respectively, for the team. All-in-all, it was a solid night for the bench and they didn’t let the Wizards bench thoroughly outplay them or anything. As we all know, that’s a big deal for this team. It should also be noted that the Clippers racked up an Offensive Rating of 111.4 tonight against the third best defensive unit in the entire league. Always crucial to play a game as crisply as that after losing the first meeting earlier this year.

CONCLUSION
This was a good win against a good team who has a good starting lineup. The win currently puts the Clippers just two back in the loss column of 4-seed Portland. Even though the Clippers couldn’t pass the Blazers up in this scenario, at least the team would have homecourt advantage in the first round if they were to meet in the 4-5 matchup if they were tied record wise. It also put them just three back in the loss column of 3-seed Houston. The Clippers, as it stands, currently own that tiebreaker due to having a better conference record and Houston not being a division leader right now. So the 3-seed is still in play for this team. They still could get there.

That’s where the upcoming schedule comes into play. They welcome a hobbled Pelicans squad into STAPLES on Sunday afternoon. New Orleans played up in Northern California tonight but did so without Anthony Davis, Omer Asik, Ryan Anderson, and Jrue Holiday. Since Anderson and Holiday are out until later on this month, at least, that leaves Davis and Asik as the only question marks for that game. Both being out would be huge for the Clippers but you hate seeing that. After that, it’s onto the east coast to play the Knicks, 76ers, and Celtics. As bad as their records might be, they are still not teams to take lightly. Especially now, when the season is getting long and teams start to sleepwalk. Focus and resolve are needed. This team has battled all year, they just need to battle a little longer. 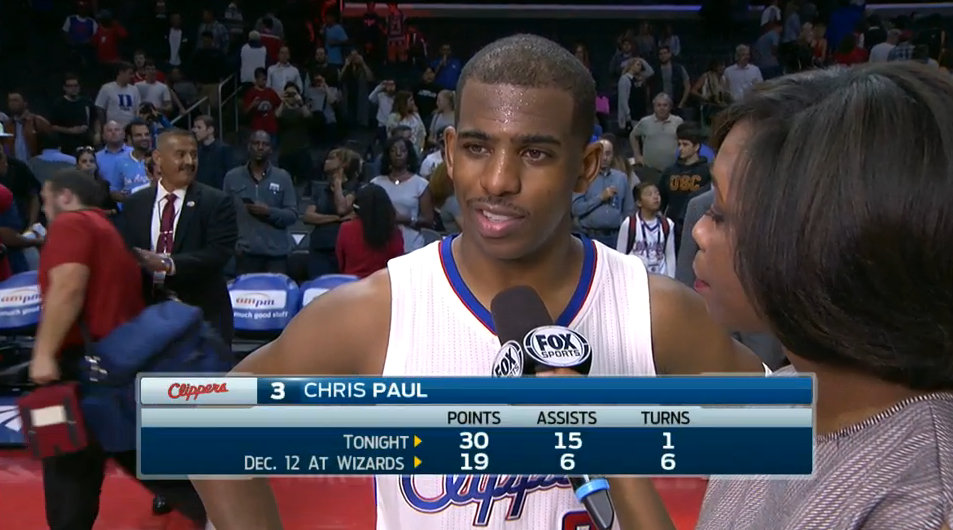