The Los Angeles Clippers wasted no time in dismissing the Denver Nuggets on Saturday night, thanks to a quick start and sustained double-digit lead that was never in jeopardy of disappearing.

Share All sharing options for: Clippers 107, Nuggets 92: Rout In The Rockies

Zero lead changes. Zero ties (outside of 0-0). No, this wasn’t a fine performance by the Clippers. It had its moments where the Clippers looked generally lackadaisical and lethargic but at no point was the final result ever in jeopardy after jumping out to a large lead early on. It was the type of win that the team needed against an opponent that they should beat. The win marked the Clippers first win in Denver since April 18, 2012. So it’s nice to get that little skid stopped.

The Clippers came out of the gates gun blazing and nailed their first five shots to jump out to a 12-0 lead just 3:35 into the contest. From that point on, the lead never got underneath ten points. All in all, the final 45:53 of game time was played with the Clippers up by double-digits. Those are the kind of nights you want to have. Especially on the road against a team that was missing Ty Lawson and Danilo Gallinari. From the early parts of this game, the Clippers offense was humming along thanks to Chris Paul hitting a three, Matt Barnes chipping in two threes, J.J. Redick doing his usual stuff, and Blake Griffin doing his thing. The Clippers were, with all things considered, the Clippers.

Even on nights when you don’t struggle to put a team away, there are still some lulls in concentration and execution. The bench is still a problem for this team but there were some bright spots. Hedo Turkoglu buoyed the Clippers with two big shots early on in the fourth quarter when Denver had the lead cut down to 12 points. His two threes there were pivotal for a bench unit trying to make some waves and keep the lead somewhat sizeable. Lester Hudson also looked okay. He was only 1-for-5 but he did have 3 rebounds and 3 steals and, at the very least, seemed to play competent defense and showcased a nice hesitation dribble that paved the way for a layup.

But, as always, the main guys are the main guys for a reason. Chris Paul had 23 points, game-high 9 assists, as well as 5 rebounds and 2 steals. The great part about his game was the level control he exhibited with his shot. He didn’t really press all that much and only searched it out when it was needed. He finished up shooting 6-for-10 and made all four of his three-point attempts on the night. However, he did miss a free throw which snapped a streak of 35 straight makes from the line. You can partially blame that one on me for jinxing him.

Speaking of jinxing someone at the line, blame me entirely for the J.J. Redick free throw miss if you’d like. I wrote on Twitter right before he stepped to the line that he was probably going to miss one and, lo and behold, he did. He was 79-for-80 from the line since January 1st and had made 47 straight free throws prior to that miss. He finished tonight with a game-high 25 points, 4 rebounds, and 3 assists on 8-for-17 from the field and 4-for-10 from three. It’s fun watching him run around those endless screens they set for him and just wear defenders out before unleashing a gorgeous jumpshot while brushing his glorious hair.

Blake Griffin had somewhat of a muted game tonight. Foul trouble can do that to a player, especially picking up a fourth foul early on in the third quarter. He only finished with 12 points and 4 rebounds but did collect 7 assists. On the other negative side, he missed all five of his free throw attempts and had three turnovers to go with those five fouls. On the positive side, though, he only played 25:24 so it’s not like he got worn out or played too much in a game that was effectively decided. Matt Barnes also had somewhat of a similar game. He started off by making his first two threes but missed his final eight to finish 2-for-10 from deep. He ultimately ended up with 10 points and 2 rebounds on just 4-for-12 shooting.

The man in the middle was pretty great tonight and played the game in front of his two brothers who were sitting courtside. DeAndre Jordan finished with 14 points, game-high 22 rebounds, and game-high 3 blocks on 3-for-6 shooting and 8-for-14 from the free throw line. Any time DeAndre can be a positive at the line is a huge deal. Especially tonight when Melvin Hunt had his Nuggets players go to the Hack-a-Jordan strategy to help get them back into the game. Jordan went to the line and did his job well enough to offset their strategy.

For Denver, Wilson Chandler led the way in scoring with 17 points on 5-for-15 shooting and was the first guy on the team to hit a three for them after the team started out 0-for-10 there. Kenneth Faried led the way in rebounds for them with 14 and also chipped in with 10 points but shot just 4-for-12. Ex-Clipper Randy Foye finished with 14 points on 5-for-13 shooting but did hit three threes. Erick Green had 11. Jusuf Nurkic had 10 points and 6 rebounds, as well as a flagrant foul early in the fourth quarter against Blake Griffin for an elbow. Will Barton had 9 and King Joffrey Lauvergne had 7. Speaking of bench players, Austin Rivers had a rough night for the Clippers and finished with 3 points on 0-for-2 shooting. Glen Davis had 4 points and 2 rebounds, Spencer Hawes made a shot but went just 1-for-5, and both Jordan Hamilton and Ekpe Udoh saw action in the final 3:14 when the game was won. Udoh made a free throw.

All in all, this was a pretty basic Clippers win. Team played solid against a bad team and put them away like they should have. Nothing special to see here. It wasn’t a great performance by the team but probably more around a B type of performance. Tonight that was enough. They held the Nuggets 37.6 percent shooting and 6-for-22 from three while forcing 15 turnovers. They also forced Denver into going a staggering 9-for-40 from outside 8 feet. The team did its job. That’s all you can ask for on a night like this when you know you have to travel home to play the Lakers in a "road" game on Sunday night.

As mentioned, the Lakers are up on Sunday night and that’s sort of a key game right now thanks to the Memphis Grizzlies losing to the Washington Wizards tonight. It put the Clippers just one back in the loss column of Memphis for the 3-seed and it put the Clippers in control of their own destiny for said seed. That’s, of course, if they actually want it. There might be some jostling to keep the 5-seed and play Portland but you should always go for the highest possible seed especially when the team(s) right behind you can still leapfrog you. Win the games you should win. That’s what the Clippers did tonight. If they keep doing it, they’ll not only get homecourt advantage in the first round but they’ll also put themselves into a better position going forward if things can suddenly break their way seed wise. 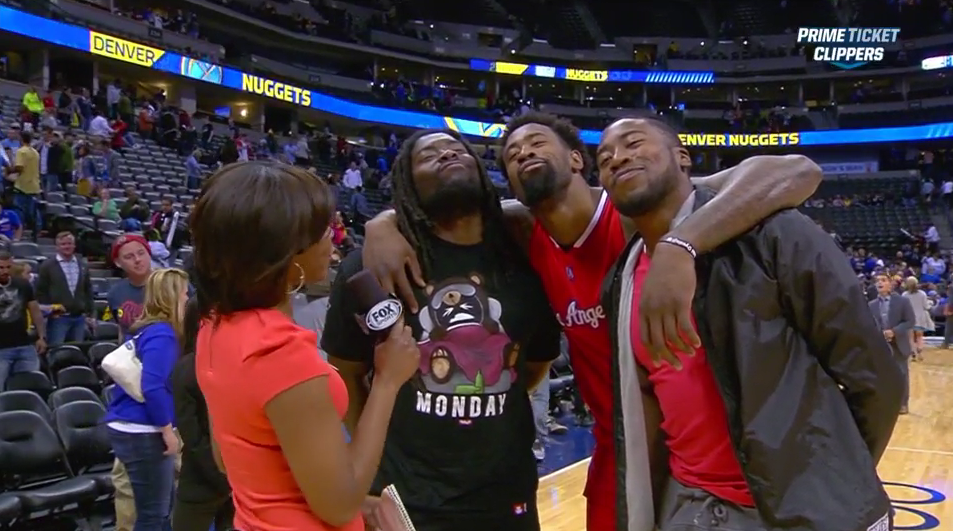