Shooting guard JJ Redick is mysteriously absent from discussions of both the Clippers and NBA shooting guards in general. That is a mistake, and I think a rather egregious one on both counts. His shooting alone makes him terrific, but it is the complete package that wins him the award of being discussed for SB Nations "Hidden Gem" Theme Day.

Share All sharing options for: JJ Redick: The Forgotten Man

JJ Redick has evolved into one of the better shooting guards in the NBA, and last year was his finest campaign yet. He is overshadowed by bigger names like Kobe Bryant and Dwayne Wade, and on his own team by stars Chris Paul, Blake Griffin, and DeAndre Jordan. The Clippers are considered a true contender for this year’s NBA championship, and most fans and pundits view them as one of the five best teams in the league. Redick is a hugely important piece in that puzzle, but he is rarely talked about or discussed. That oversight needs to be corrected:  JJ Redick is hidden gem if there ever was one.

One of the great arguments in NBA fandom today is about statistics and their place in evaluating players. Some people like traditional statistics, some like more advanced models, and others still prefer to judge players based on the "eye test". JJ Redick is a fascinating case because he has terrific advanced numbers, solid if mostly unexceptional "traditional" statistics, and doesn't have a flashy style of play. His obvious value largely lies in his shooting ability, where his numbers measure up nicely, but his game also provides substantial below-the-surface help that needs to be pointed out and appreciated more by the NBA citizenry.

Any glance at JJ's numbers starts with his incredible three point shooting. JJ shot almost 44% from long distance, which was the fifth best in the NBA. More significantly, he took six threes a game, finishing with 458 attempted on the season, sixth in the entire league. All this adds up to 200 three pointers made, which was also fifth in the NBA. That kind of long range sniping is not only hugely important in terms of the obvious scoring, but also in spacing the floor. The Clippers were the number one offense in the NBA last year (very narrowly ahead of Golden State), and that simply doesn't happen without JJ Redick and his 200 threes.

The Clippers run a lot of pick and rolls with Chris Paul and Blake Griffin/DeAndre Jordan. It is much easier to run a pick and roll if there are shooters on the wing that defenders can't leave to play help defense. JJ Redick’s ability to hit three pointers made guarding the Clippers an absolute nightmare, punishing overhelping defenders time and time again. The spacing provided by Redick is enormously important in freeing room on the court for Griffin and Jordan to roll to the rim, and for Chris Paul to operate in his favorite midrange area. All this is hard to quantify, but the example below should help show how Redick helps just by being on the court. 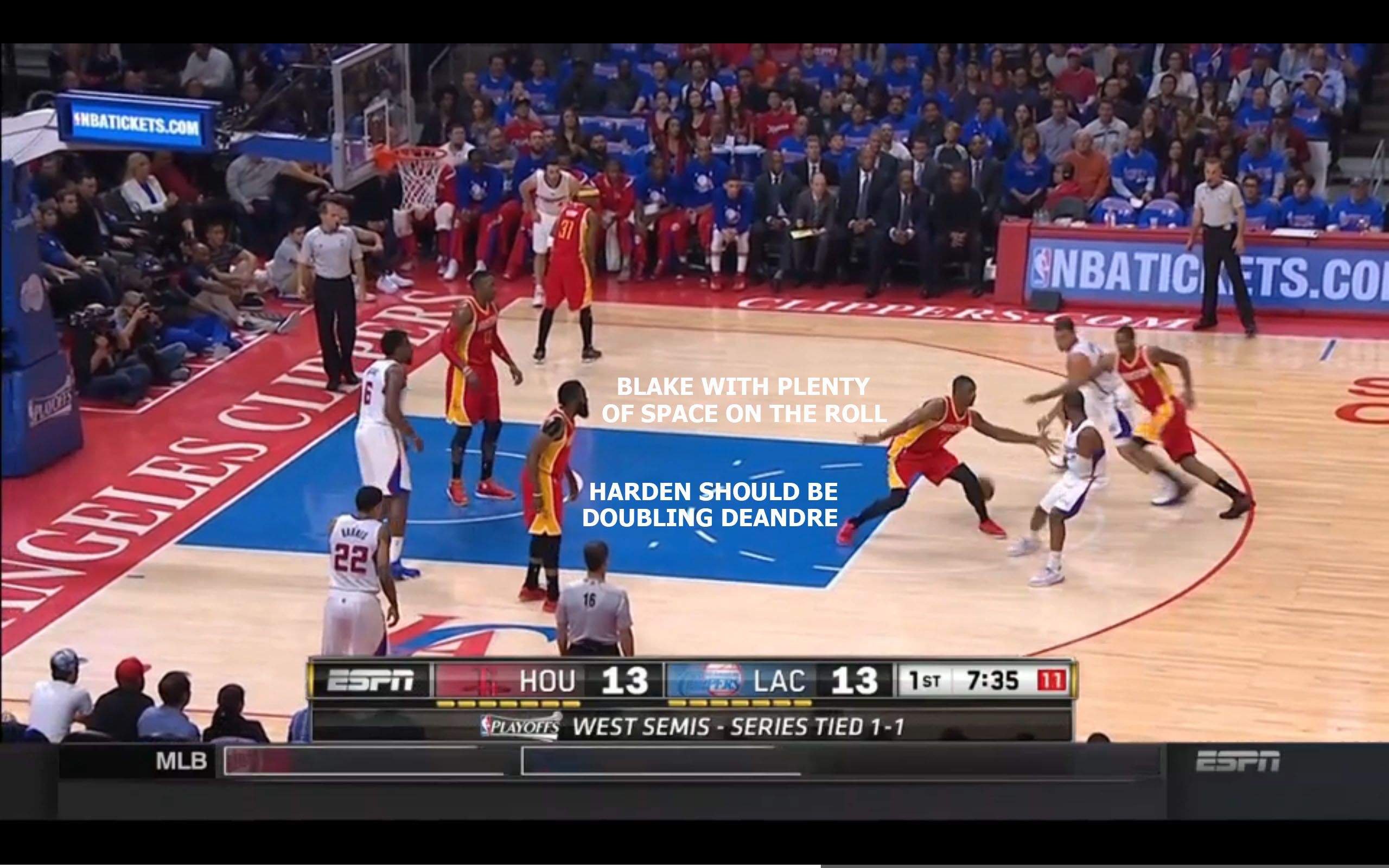 The beauty of this play is its simplicity--and what it shows about the impact of JJ Redick. It is a basic 1-4 pick and roll with Chris Paul and Blake Griffin, starting just below the three point line. Paul feeds Griffin a perfect pocket pass, and he starts rolling with the ball toward the basket. Dwight Howard, the Houston center, can’t step up because he would leave DeAndre Jordan open for a lob pass. James Harden could slide over, but the closest defender is Jason Terry, who is marking Redick in the corner. In fact, Terry is face guarding JJ tightly, making the extra effort to remove him from the play. Terry’s fear of a Redick three allows Griffin to head to the basket against little opposition.

JJ Redick brings all sorts of other offensive tools to the table besides pure shooting ability. Yes, he has earned his spot amongst the elite NBA marksmen--Ray Allen, Reggie Miller, Kyle Korver, Glen Rice, and Klay Thompson (Steph Curry now seems to be in a different realm altogether.) He is a deadly shooter, but he also has the infamous Rip Hamilton motor--Redick was a young player when Hamilton debuted a new style for the energizer shooting guard. His relentless motor has him running around screens tirelessly, wearing defenders down, and it causes switches. And it's maddeningly disruptive to defensive units already struggling with the gargantuan task of containing Paul, Griffin, and Jordan. Little wonder then that at times even elite teams will throw in the towel on defense, and resort to the non-basketball tactic of "hack a DJ."

Redick has become adept over time at little dribble handoffs and secondary pick and rolls. He can attack unbalanced defenses, and is not bad at creating his own shot--but that is not his game. He can go to the basket against overplaying defenders, averaging 2.6 free throws a game:  a number that should go up next season as the Clipper attack becomes even more cohesive and deadly. You don't want to send JJ to the free throw line. He hit over 90%, third in the NBA. JJ had the 8th best TS% (.622) and 3rd best EFG (.583) in the entire league--he is a top five shooter, his scoring is on the rise, and he is in a lineup with 3 All-Stars, including two of the top 10 players in the NBA.

When Blake Griffin was injured for a one month stretch in February and March, JJ stepped his game up to a new level. He averaged 20.6/3.1/2.4 on 50/43/100 shooting splits, which are truly absurd numbers. Redick not only survived without the threat of Blake attacking the basket, he thrived.  It was obvious that he's ready to handle a larger role, if need be, and get picks and plays and more shots.  After that stretch last season, now it's not hard at all to imagine Redick as a 20+ppg scorer in the NBA--and that could easily happen this year, though it probably won't.  No matter who is on the court with him, JJ Redick is deadly at scoring the basketball.

Redick is a good-great basketball player, a phenomenal shooter who also does the little things--to the careful student, he scores very high on the eye-test as a guy who knows his way around the court, and lives to play the game--and play it the right way.  His style is almost classical, but he's excelling in the modern NBA.  He is a superior passer, for instance.  Though he averages only 1.8 assists per game, remember that he excels at catching and shooting.  He moves the ball and never stops it, and makes the right pass.  He averaged 4.4 APG in Milwaukee, briefly, before he came to the Clippers. JJ is more than happy to leave the ball in the hands of Paul and Griffin, and race around the court.  He rarely forces the issue, and will readily pass up a decent look for himself to get a better one for a teammate--a rare and complicated quality for elite shooters.  He knows what to do on offense, and does everything well.

Redick does not possess great size or athleticism for his position, but he's a solid defender because he's smart and understands how to play team defense. Nobody will mistake him for Tony Allen in man to man coverage, but JJ is at worst an average defender.  He excelled on defense against James Harden in the playoffs, and was quite effective as a stopper--though the heavy load might have hurt his shooting.  Redick missed crucial shots and slumped in crunchtime, just when the Clippers needed him to find an extra gear.  He had never played that type of all-around game--against an MVP contender--before.  Knowing what we do about JJ Redick, going after that extra gear and raising his game yet another notch is exactly what he has been working on and thinking about.

Is JJ Redick a top tier shooting guard, like his nemesis Harden, Jimmy Butler, or Klay Thompson? No, he is not. But he is most definitely in the next level below, and while younger players such as Andrew Wiggins, Bradley Beal, and Victor Oladipo are constantly hyped and praised, Redick keeps shooting and plugging away. All three of these players have the potential to be better than JJ in the future, but none of them is better than him right now. Redick is older, isn’t flashy, and doesn't have a Hollywood personality, despite his looks. I am here on "hidden gems day" to say that JJ Redick has been grossly overlooked and ignored. He shouldn’t be. Chris Paul and JJ Redick are the 2nd best back court in the NBA right now, and vying to be #1. No small part of that is due to number 4 from Duke.

So let's see how CP3 and JJ fare this season, paired with the Dynamic Duo (is there a name for the Griffin-DJ tandem?  I forget.) and flanked by Hall of Fame small forward Paul Pierce and this new bench. I can't wait to watch JJ get after it, and shine in the brighter light at the same time.

All stats are taken from NBA.com or basketballreference.com