A lot has been said about Blake Griffin. But now that we're done with all that extraneous stuff, what does all this mean going forward? When is Blake coming back? What is a spiral fracture?

Share All sharing options for: Blake Griffin's Punch: What This Means Going Forward

Now that we're emotionally unpacked and ready to move forward, it's time to look at Blake Griffin's hand a little more objectively. The Clippers will not be trading Griffin this season, so the talk about what his broken metacarpal is subjectively worth, like your team's favorite role player, can stop.

So now that we have an idea of how it happened and what Griffin was doing when he did it, it's time to look at the nature of the injury. 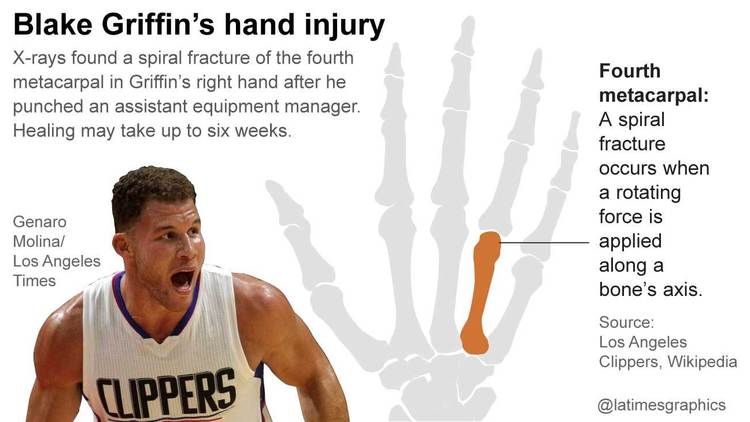 The LA times put up a great article with numerous quotes from doctors detailing the nature of Griffin's surgery, along with this simple picture showing where and what exactly this injury is. Most of the quotes here are encouraging, detailing the simplicity of the injury and the fact that the injury rarely comes with any complications. This injury is a bit more worrisome simply because it is Griffin's shooting hand, and things like gripping, shooting, and even dunking will leave his hand at a vulnerable position. My biggest concern is how Griffin will look when he's back on the court, as this is no small feat to recover from, particularly with very important playoff run around the corner. Hand injuries are nothing new to the NBA, and comebacks have varied from full returns to Kevin Love refracturing a metacarpal during a particularly injury-plagued Timberwolves compaign back in 2012-2013. Our own Paul Pierce suffered a non-displaced fracture during his time with the Nets, and didn't miss too many games himself.

So what happens to some people that makes their recoveries quicker than others? Well, luckily for Blake, he also has a non-displaced fracture. What's the difference between a displaced and a non-displaced? Good question.

There are multiple types of fractures. There's a transverse, which pretty much just cuts down the middle like a clean break across the bone, and an oblique, which cuts at more of an angle. The oblique fractures tend to be displaced and might require a more invasive technique to have heal in the right way. What Blake has is a spiral fracture, which is like it sounds, a break that forms a sort of spiral rather than the cut across in a transverse break or the cut at an angle like in an oblique. It's got a lot more subtleties than the other two, but the good thing is there wasn't a displacement for Griffin's particular fracture.

If you don't mind some medical jargon, here's a nice quick vid that talks about hand fractures, how you get them, and how to recover from them:

Ramona Shelburne reported a second surgery that Griffin had about a week or so after the first, but it sounds like both surgeries are related. There hasn't been too much particular detail about what the surgeries have entailed but athletes do have operative fixations to help speed up the healing process. Despite what the media tells you, Blake's hand injury does sound fairly routine from what doctors have been saying, and standard procedure should hopefully bring him back 100%

You'll see Griffin back on the bench after the All-Star break, possibly sporting some sort of splint/cast that keeps his fingers flexed. This is because your metacarpophalangeal joints have ligaments just like your knee, and when your fingers are being flexed these ligaments are taut and being stretched. That's why a lot of these hand splints are designed to flex your fingers, so you can keep those ligaments stretched and prevent shortening/degeneration after the splint is removed. If those ligaments are shortened, loss of range of motion can follow. Once Griffin is done with an initial immobilization period, he'll be going through some rehab to regain his full range of motion. It's incredible how quickly someone can go from a fracture to playing a sport again, but I'm sure a lot will be put in to getting Griffin to feel very comfortable with his hand. It's going to take a lot of doing to get back in a flow shooting a basketball again.

This is an incredibly interesting injury and hand injuries have become fairly common in basketball. The aforementioned SB Nation article on recent NBA hand injuries is a bit dated, but one of the first things that came to mind when I found out more of the exact nature of Blake's injury was a Russell Wesbrook injury that happened to start last season, in a game at Staples Center. Westbrook came back in a month from a metacarpal break and went on to have an incredible season. This Clipper team will have precious little time to get its footing together with Griffin back on the floor, but let's hope he can come back sooner rather than later. Lost in a lot of this drama is how significant this postseason is, because this team, like every other team, is on the clock. And with this backcourt particularly both pushing on the wrong side of 30, every postseason is precious.

So now that we've all drenched in just how embarrassing this incident has been, let's move forward and wish Blake a speedy recovery and a return to help these Clippers make a postseason run. He'll have gone through a ton before he sees his first gametime action. To players like the exhausted Chris Paul, his return cannot come soon enough.